3.4 Using the Light
Next

When faced with overwhelming choices in a beautiful garden, it is almost essential for garden photographers to give themselves a target, an assignment. 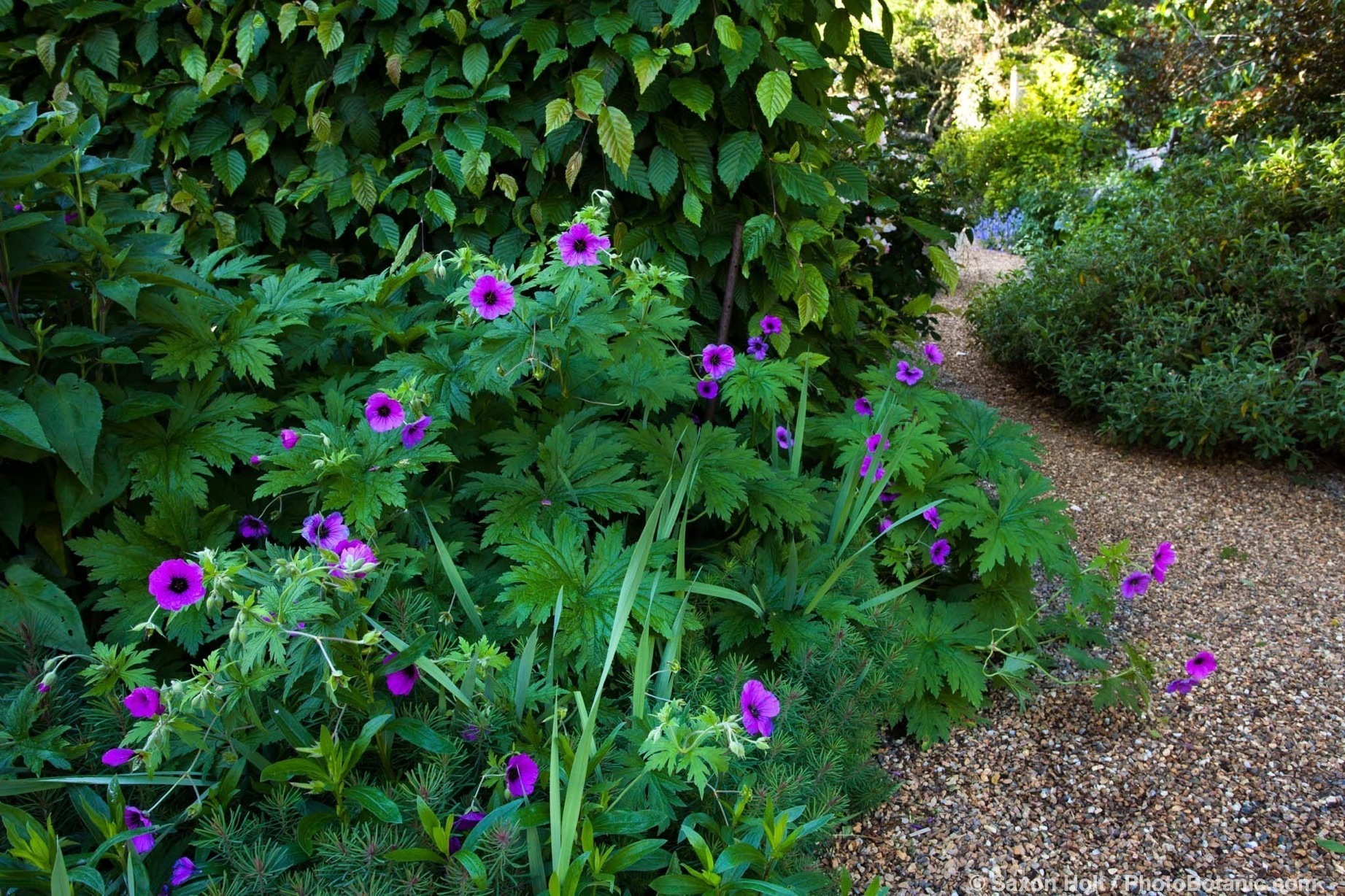 While it is a pure delight to wander around a wonderful garden, drinking in its beauty and grabbing shots along the way, such photos often turn out to be mere snapshots without a story to tell. They may remind you, the photographer, of what you saw, but they don’t communicate anything to others.

For this lesson in the Workshop, give yourself an assignment for your next garden shoot. Choose a feature of the garden—its style or theme—and tell a garden story. Think like a gardener; trust those instincts that inspire you in the garden, and use them to focus on a subject as a garden photographer.

I recently had an excuse to go wander around the garden at Digging Dog Nursery. Nurserywoman Robin Parer had asked for photographs for a book she was writing on geraniums, and the borders at Digging Dog have plenty. Follow along as I stalk one particular geranium in this fantastic garden, designed by the talented Gary Ratway. 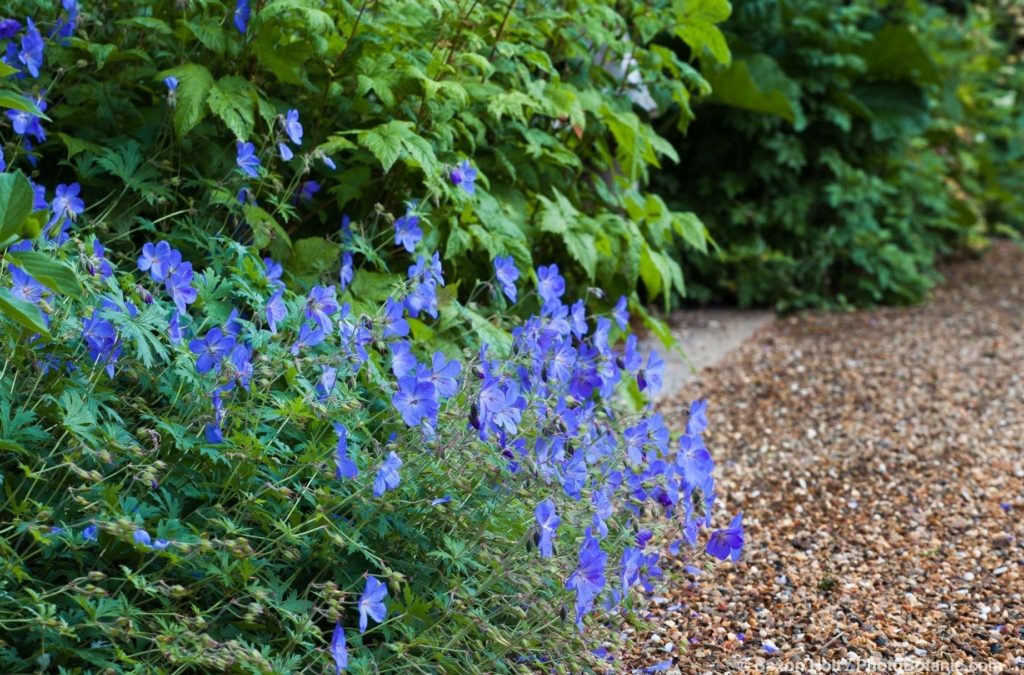 Geraniums are difficult to photograph. The very features that make them so valuable in the garden—lax, sprawling fillers with delicate leaves, ephemeral, many with blue flowers—make them hard to isolate and distinguish in a photograph. So I was delighted to find one specimen in full flower: the glorious ‘Johnson’s Blue’.

I was determined to get a calendar-quality image for Robin’s book. This one plant was the most floriferous geranium in the garden so I challenged myself, working the scene, trying different angles and lenses, and, ultimately, getting a shot I liked. Geraniums were my theme, my assignment; and this one plant was going to give me a winner.

I started with a classic horizontal shot (above), the geranium spilling out of the border onto a gravel path with nothing else in flower around it. For variety, I tried a vertical shot to bring in an old bench half hidden in the foliage. I kneeled on the path with my tripod almost on top of the geranium, as low as it can go, using a wide-angle lens to get the image, below. 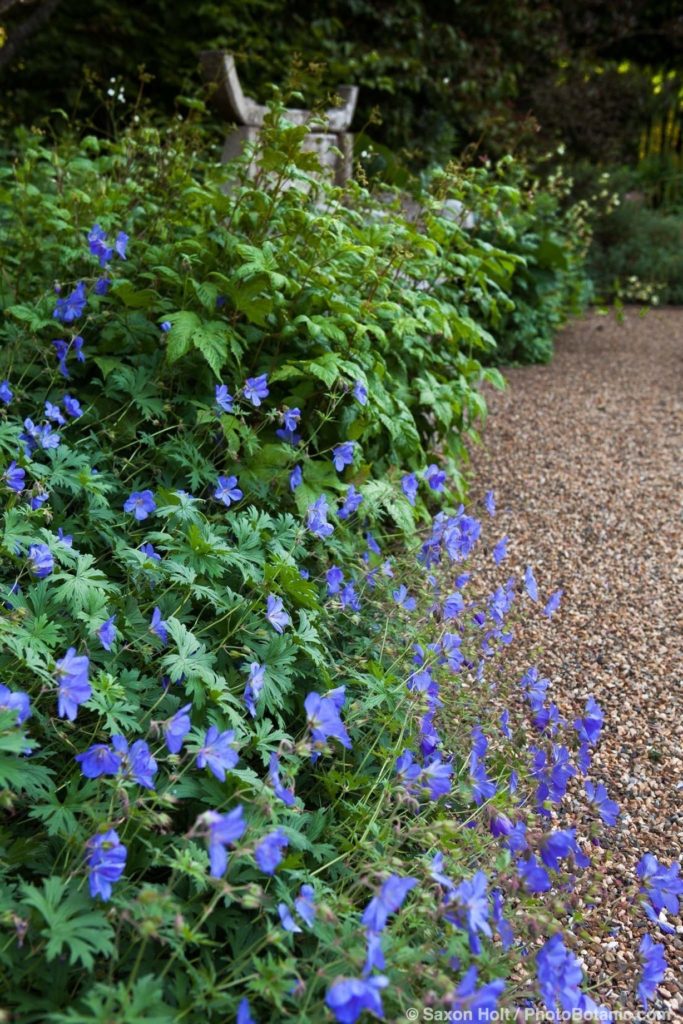 Another way of composing a vertical with the bench is to use a longer lens. Again, at a low angle, I backed away so that the telephoto lens could get close to the flowers while stacking up the other elements as shapes in the composition.  We will talk more about lenses in lesson 4.3 Lenses and Perspective. 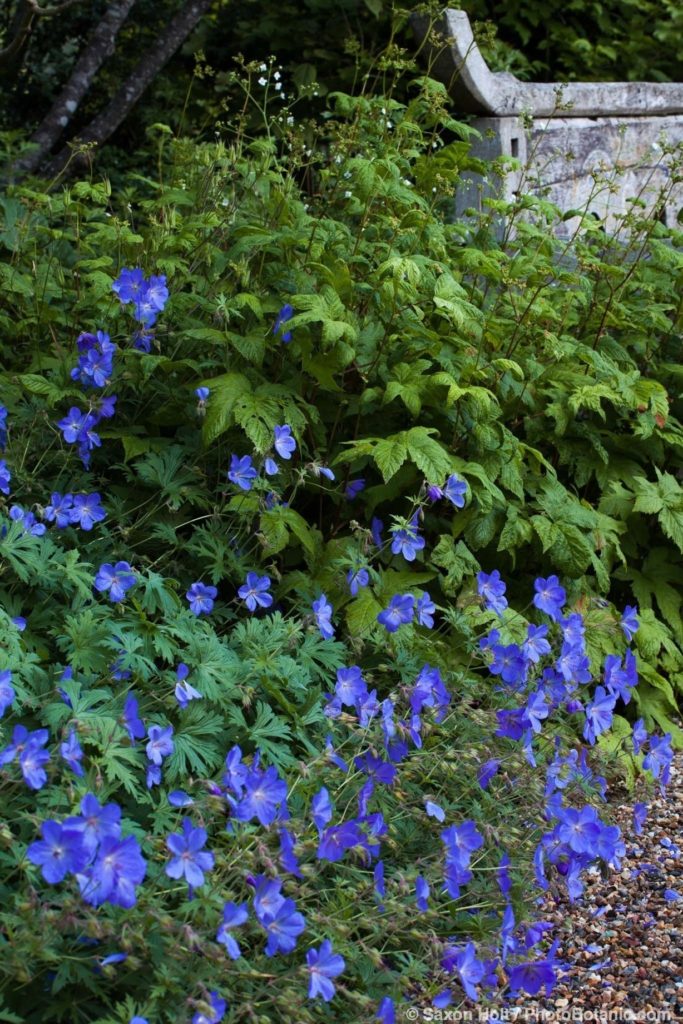 This is the classic way to “work” a garden photo: trying different techniques, thinking of different ways to present the story. Having an assignment like this forced me to explore about every angle and every way to capture the subject—to slow down, ease into the work to really see the subject and its surroundings, and then decide which elements need to be part of the story that I wanted to tell.

Let’s look at the geranium from the opposite direction: 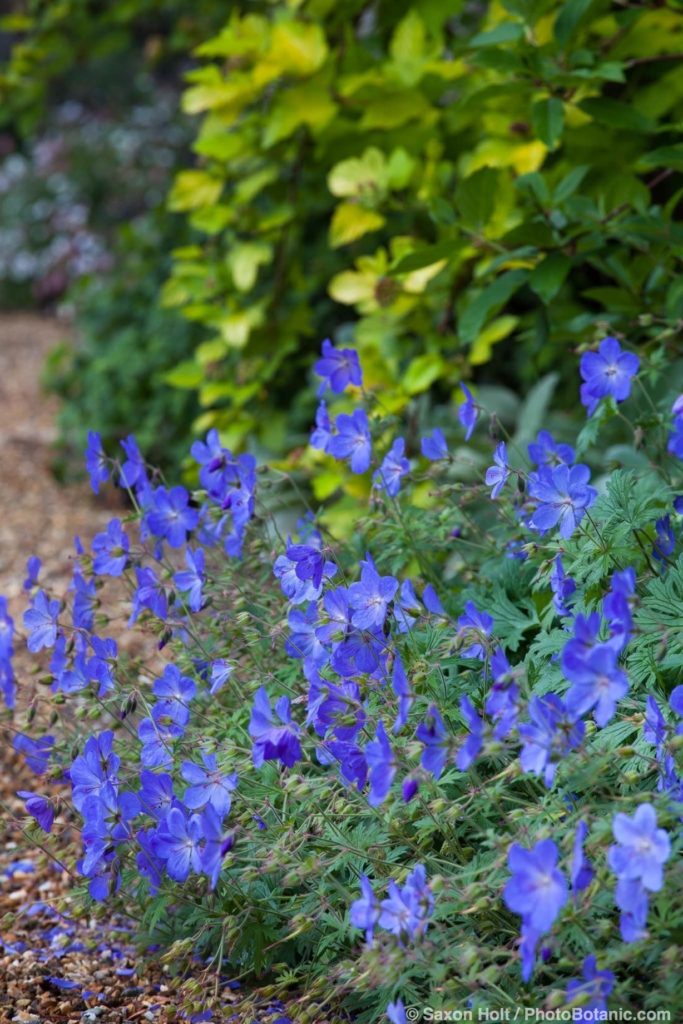 Almost the same relative composition—the geranium holds about the same space in the frame—but this photo, above, is all about the blue geranium juxtaposed against the chartreuse foliage of its neighbor.

I returned the next morning, still walking in circles around the garden looking for geraniums.  I came back to this border, and continued stalking ‘Johnson’s Blue’—not wanting to miss any new photo opportunity. The light was different in the morning. 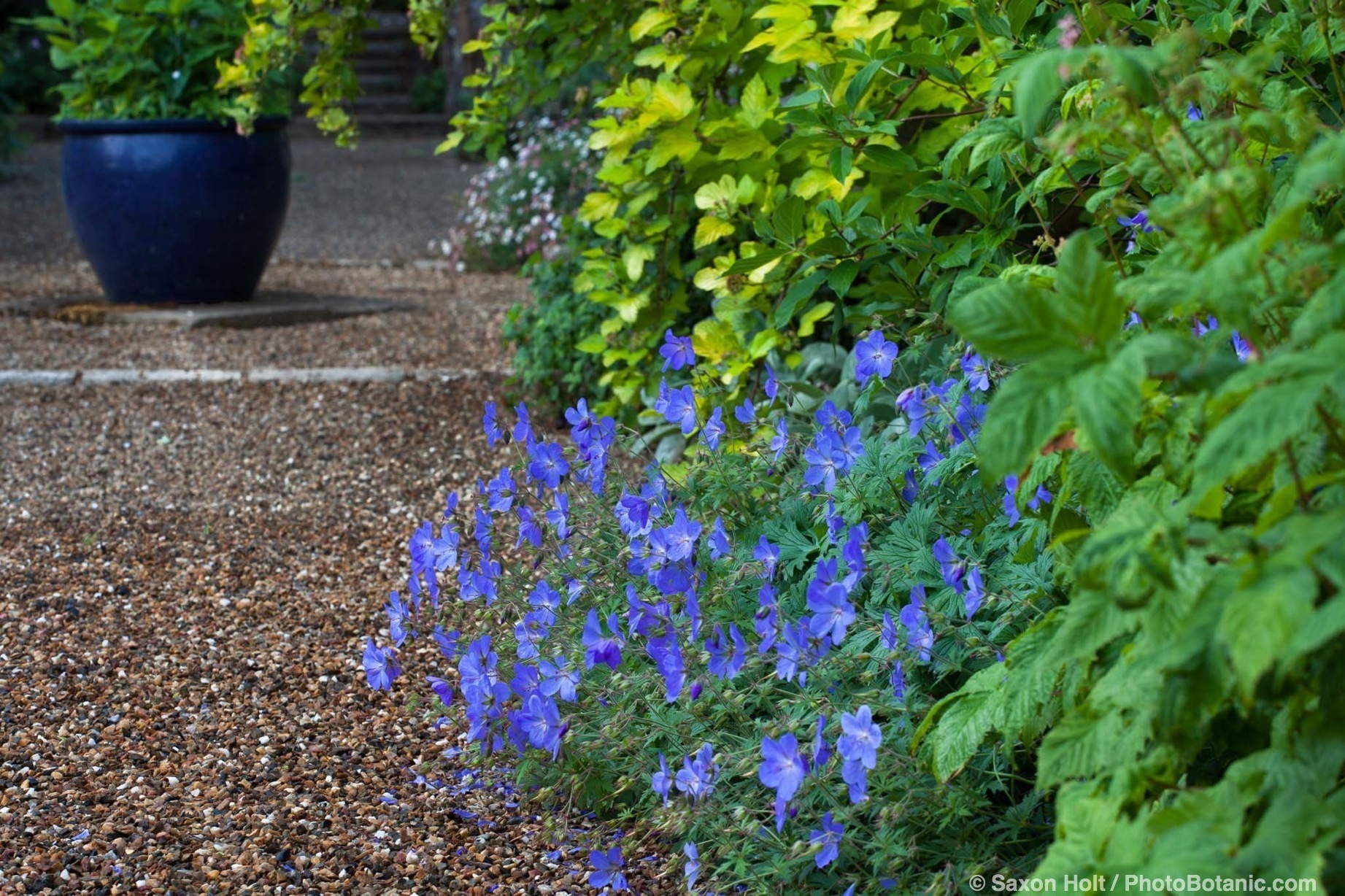 Now, I was able to incorporate a deep blue urn in the pathway. The previous afternoon, the light had been too murky to even try this shot.

Then I tried an even wider lens. Aha! I found something for the book. 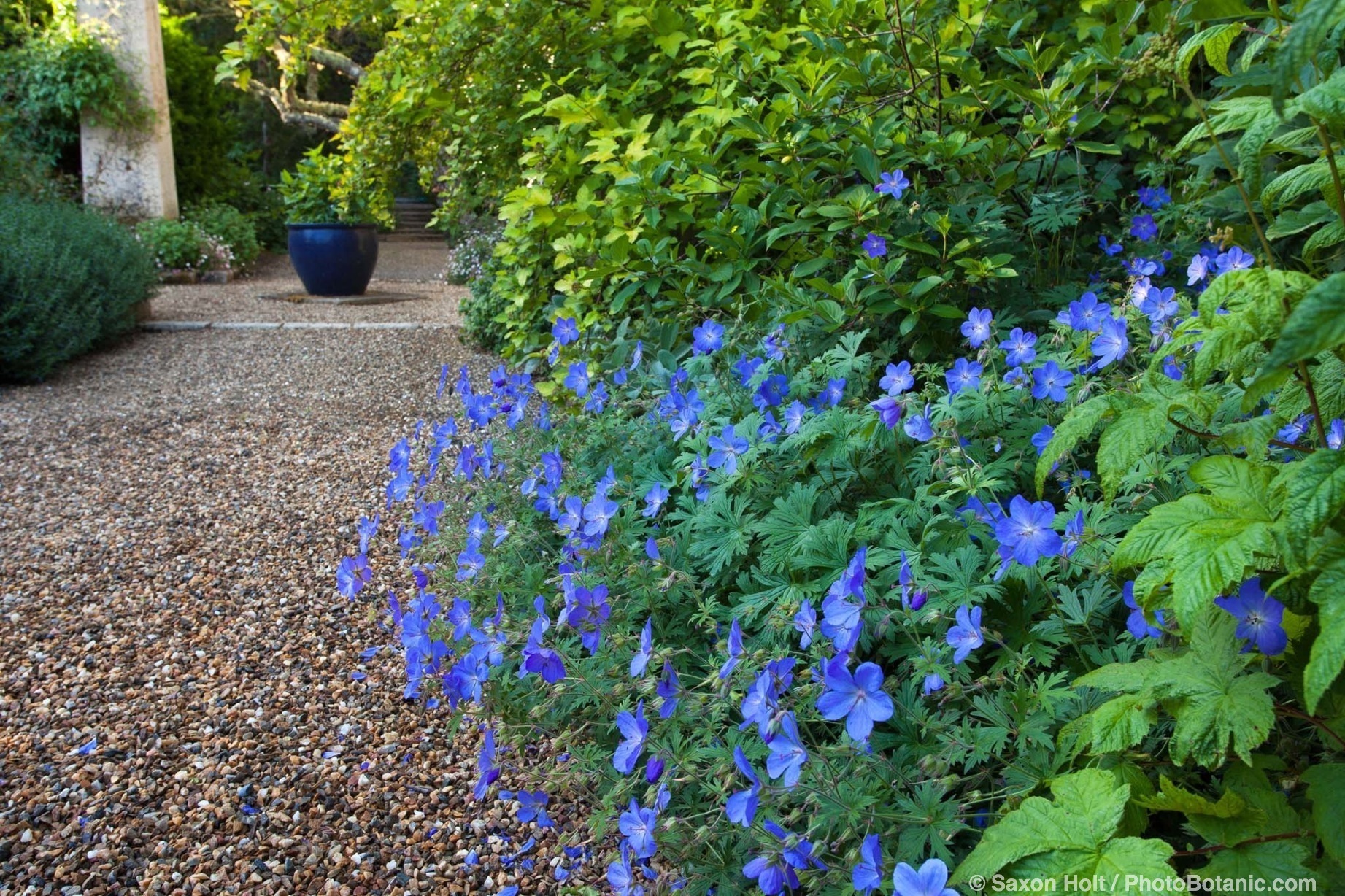 I liked all the photos for different reasons, but this one, above, really showed an exceptional use of this geranium, its scale and habit, its color and companions…its place in the garden.

With an assignment in hand, with an excuse to really look, you will find yourself learning a lot about your subject. I have no doubt that I am a better gardener for having studied gardens to see what makes them photogenic. I feel confident that I now know much better how ‘Johnson’s Blue’ geranium should be grown. I am thinking like a gardener.

It took hours, even days to “see” this. But without the assignment, to force me to keep looking, I doubt I would have come up with what I consider a special photo.

That is the goal of this lesson, indeed this entire PhotoBotanic Workshop, with its focus on taking “good” photos. Striking pictures don’t just happen. Take your garden photography seriously. Put all the techniques you have learned into practice with an assignment, a theme that you want to explore and tell a story about. When you sense a great photo is to be had as part of the assignment, “work” the scene.

There is always the fear that you will miss something even more glorious if you stay with one scene in only one part of a garden, but the bigger fear is to miss the moment when the one great photo looks its best. This does not mean you must literally stay in one place. There are geraniums in other parts of the garden and wonderful photos to be had on the theme, but I knew to keep circling back to ‘Johnson’s Blue’. I knew there would be a great shot if I kept looking.  You really want to come away with that great shot, not lots of snapshots. Be mindful of where your best shots will be found.

Indeed, staying on theme will result in even more insight on the garden you are studying, and give you other photos you might never have seen. 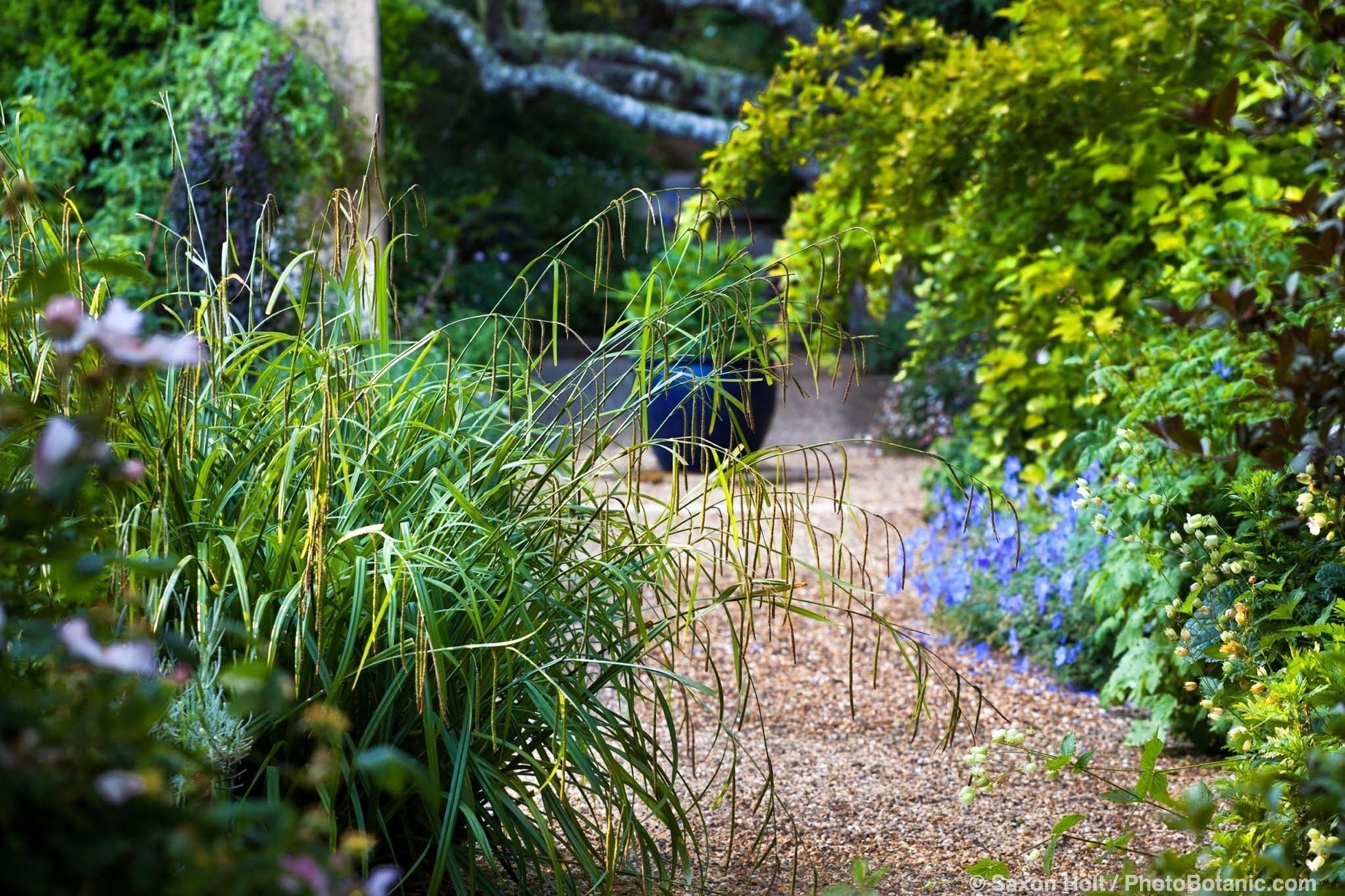 If I hadn’t been down at ground level studying ‘Johnson’s Blue’, I would never have seen how beautifully this Carex pendula enlivens the garden. I only got to see the carex shot because I kept looking for ways to capture the geranium I was stalking.

And in the very first photo of this lesson, do you note the magenta Geranium psilostemon, along the path into the other garden room? In the distance is that same ‘Johnson’s Blue’.

There are many ways to give yourself an assignment. Think like a gardener to find a theme that interests you, that will inform your photography. Are you good at propagating, do you understand good color combinations, love foliage, feel attuned to seasons, enjoy design, marvel at trees? Choose a theme and go shoot.

Meanwhile I am still looking for geraniums at Digging Dog nursery and the story expands. 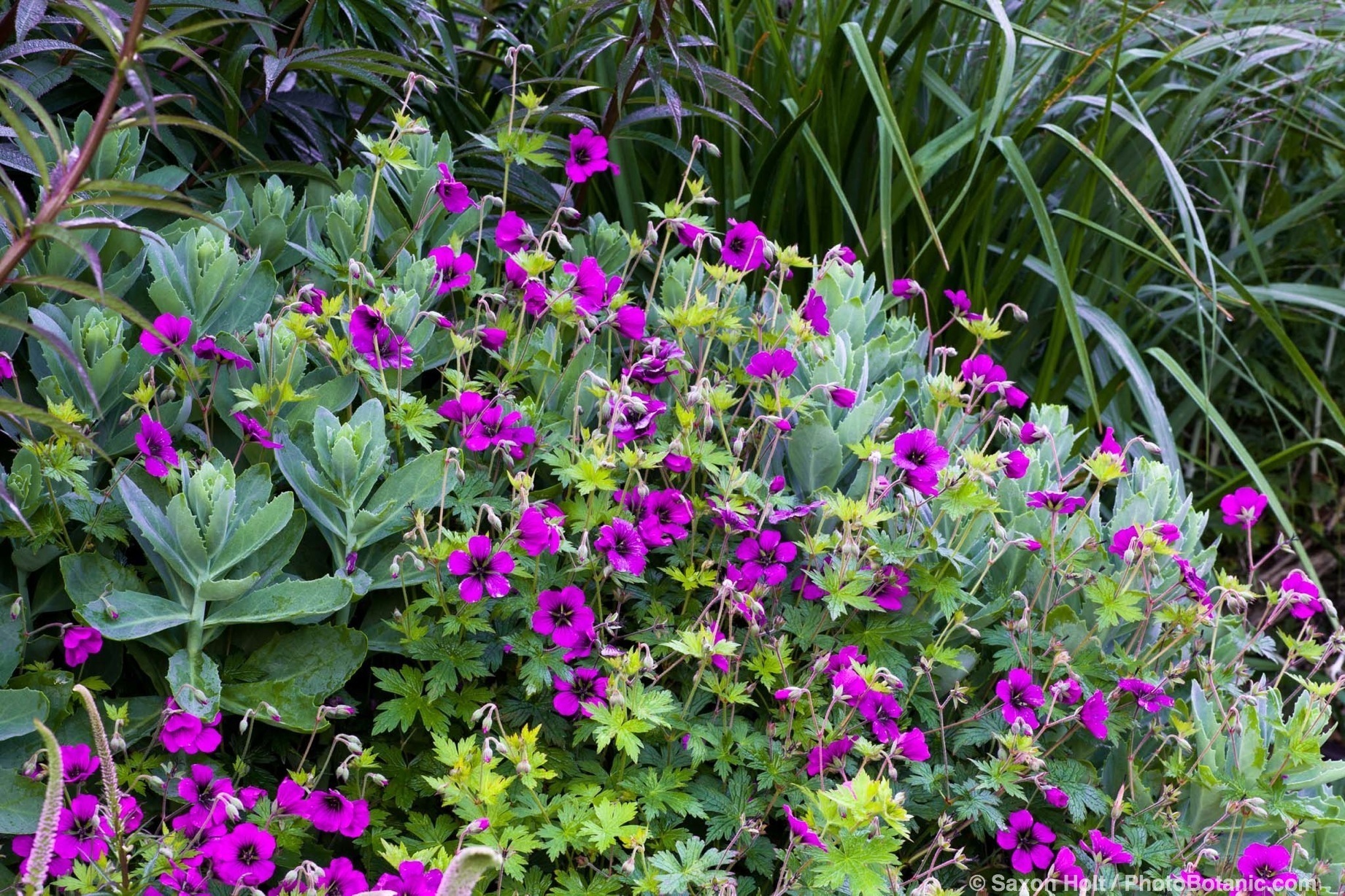 As you get more comfortable telling stories, you will be able to juggle multiple themes during a shoot, always thinking about what you are seeing and how one story relates to another.

Remember to tell your story from different perspectives, and try to tell the whole story. Get an establishing shot, a photo that shows a wide view of your theme within the garden context. Include details and close-ups. Keep circling back to your best plants.

Be open to supporting photos that may expand your theme or even change it. If your assignment theme is really not effective, and the photos just are not materializing, don’t get stuck. Let your camera go to what is happening in the garden.

While thinking about blue geraniums at Digging Dog Nursery, it was easy to see how Gary used other blue-flowering perennials, such as Nepeta ‘Walker’s Low’. 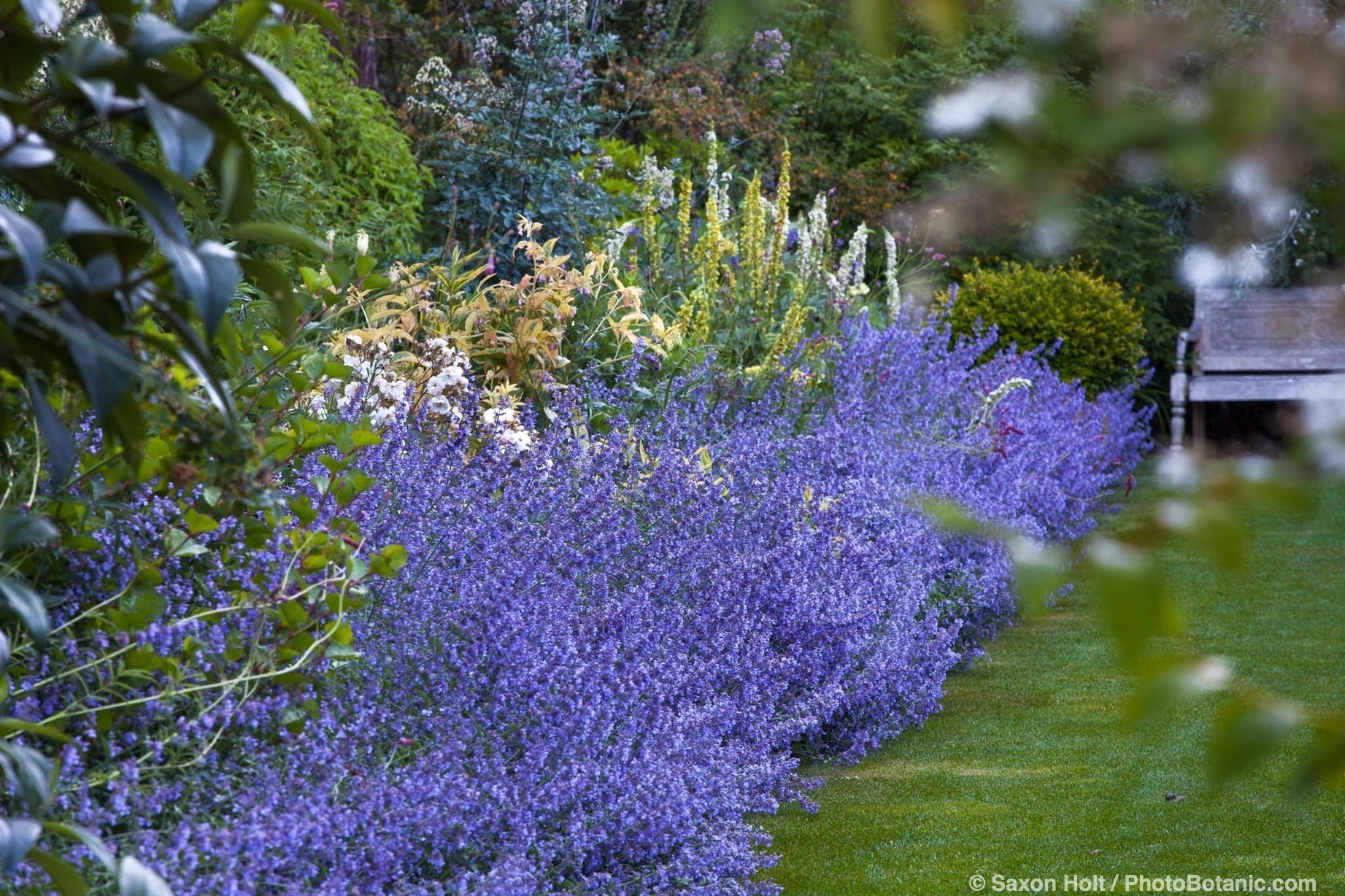 Now the assignment could change to “blue in the garden,” an expansion on the geraniums. I began seeing blue everywhere. 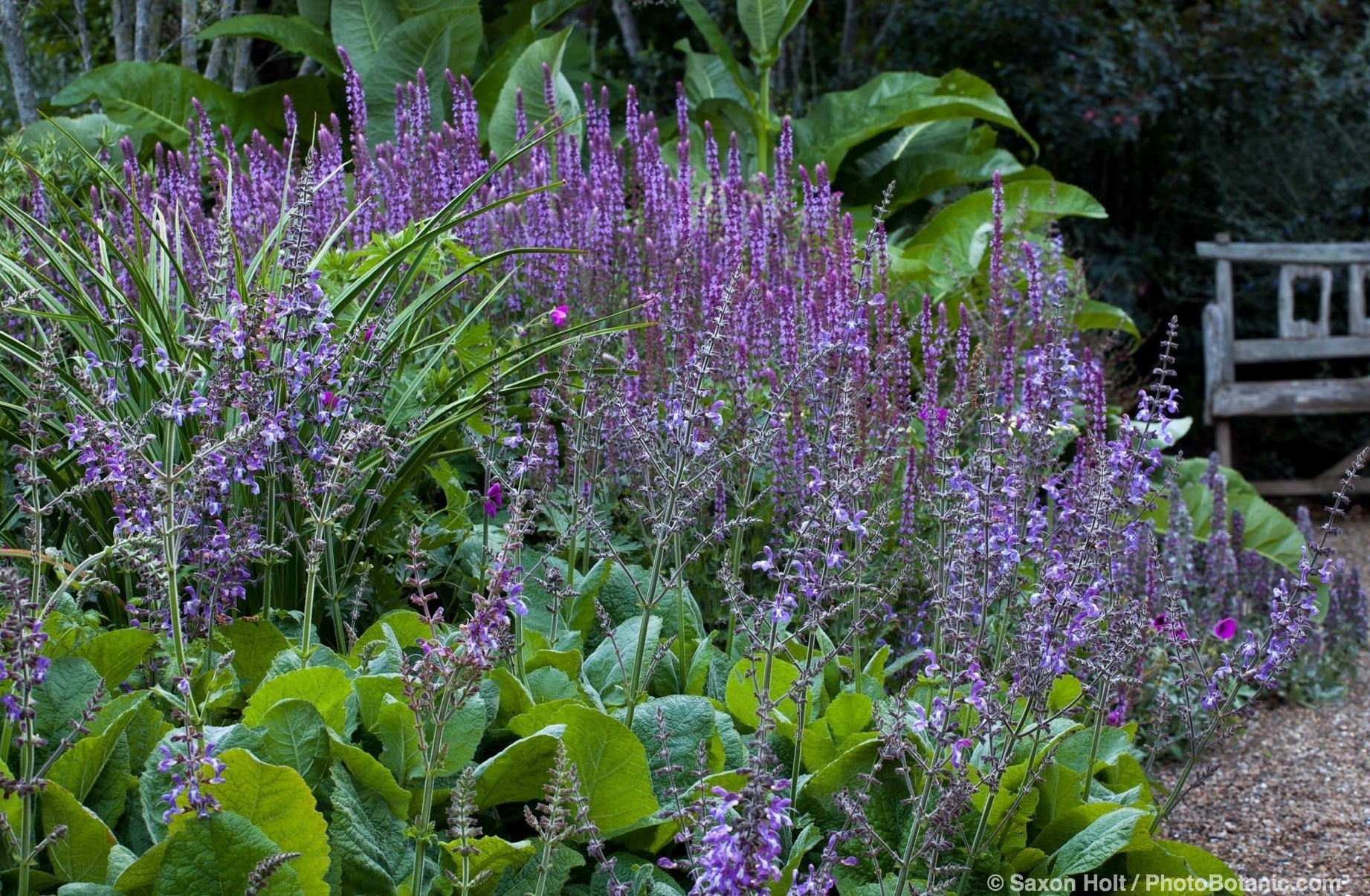 My original assignment was simply “Geraniums.” I got hooked on ‘Johnson’s Blue’ and expanded to all the blue perennials I could find.

By the end of the shoot I was working on multiple themes and having a blast as each theme played off the other. I circled the garden over and over, the light changing, my eye evolving, seeing new ways to combine the themes.

Do this for yourself, plan fro success. Start with a theme to give yourself an assignment, something you would like to explore as a gardener. Then open up to what you see in the garden, always remembering your original theme. Have fun.