Hard Light and Back Light 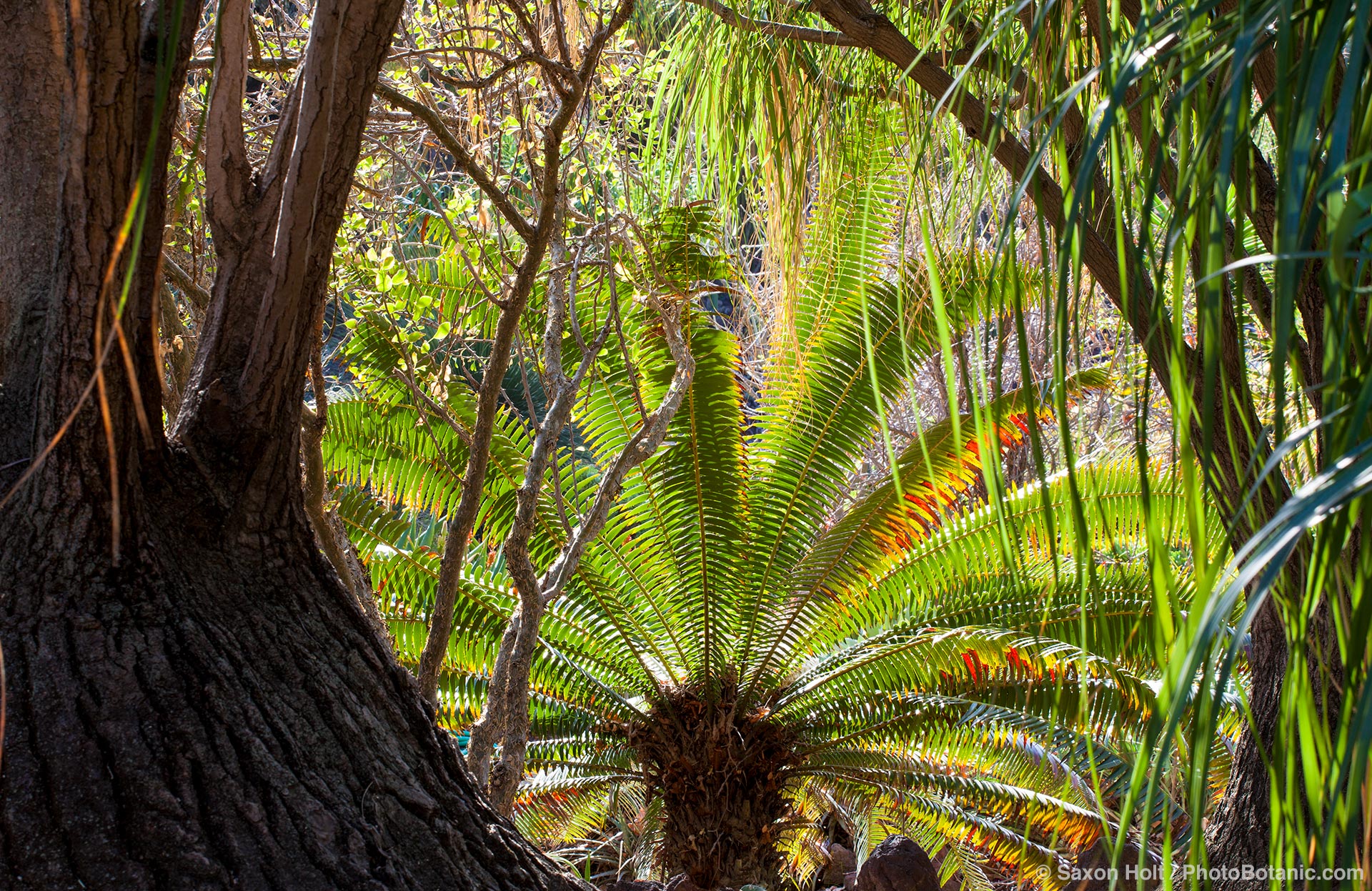 Usually I never shoot in harsh, hard light.  Bright, strong, contrasty light tends to have deep, black shadows with no color subtlety.  As a garden photographer, when the sun came into the garden, I would retreat to the shadows where the light was soft.

But I am also a California garden photographer and the sun is an important element of many garden stories.  People expect to see sunny California gardens, so whenever a photo can manage to show some bright sun somewhere in the picture, the scene will glow.

On a recent shoot, I found myself in the strong sun in the magnificent gardens at The Huntington in Southern California.  I was looking specifically for Cycads and found the photo above, backlit as I stood in the shade of a grove of Ponytail Palms (Beaucarnea recurvata).

I began looking for other, even more complex plant combinations: 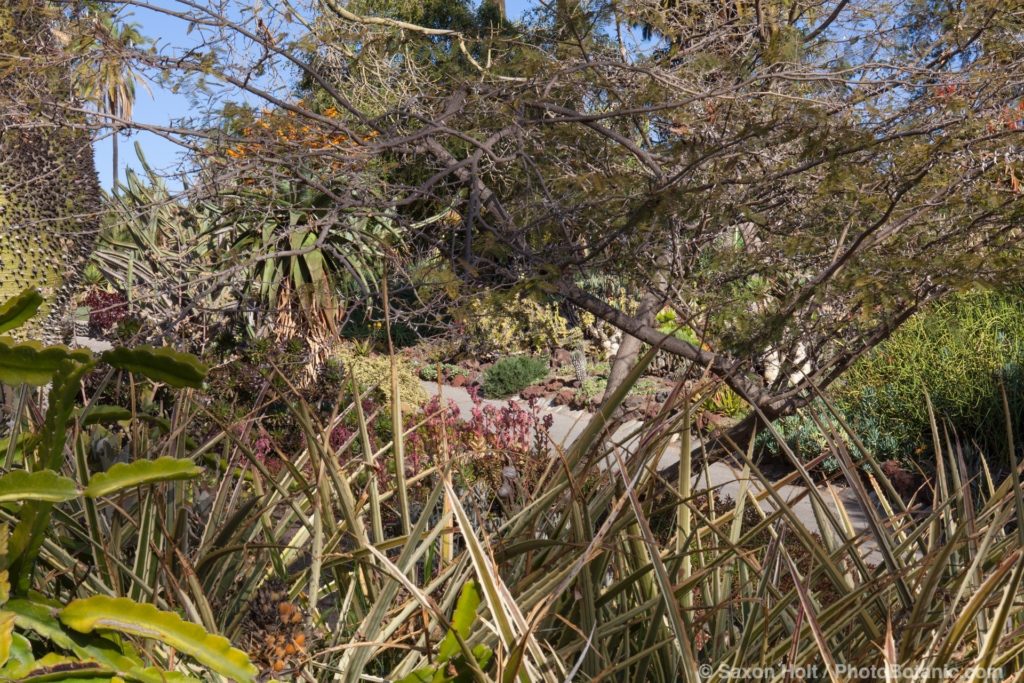 That is a downright terrible photo, with the sun behind me, but it serves as a great counterpoint to the exact same group of plants seen from the opposite direction, from the path looking back, for back light: 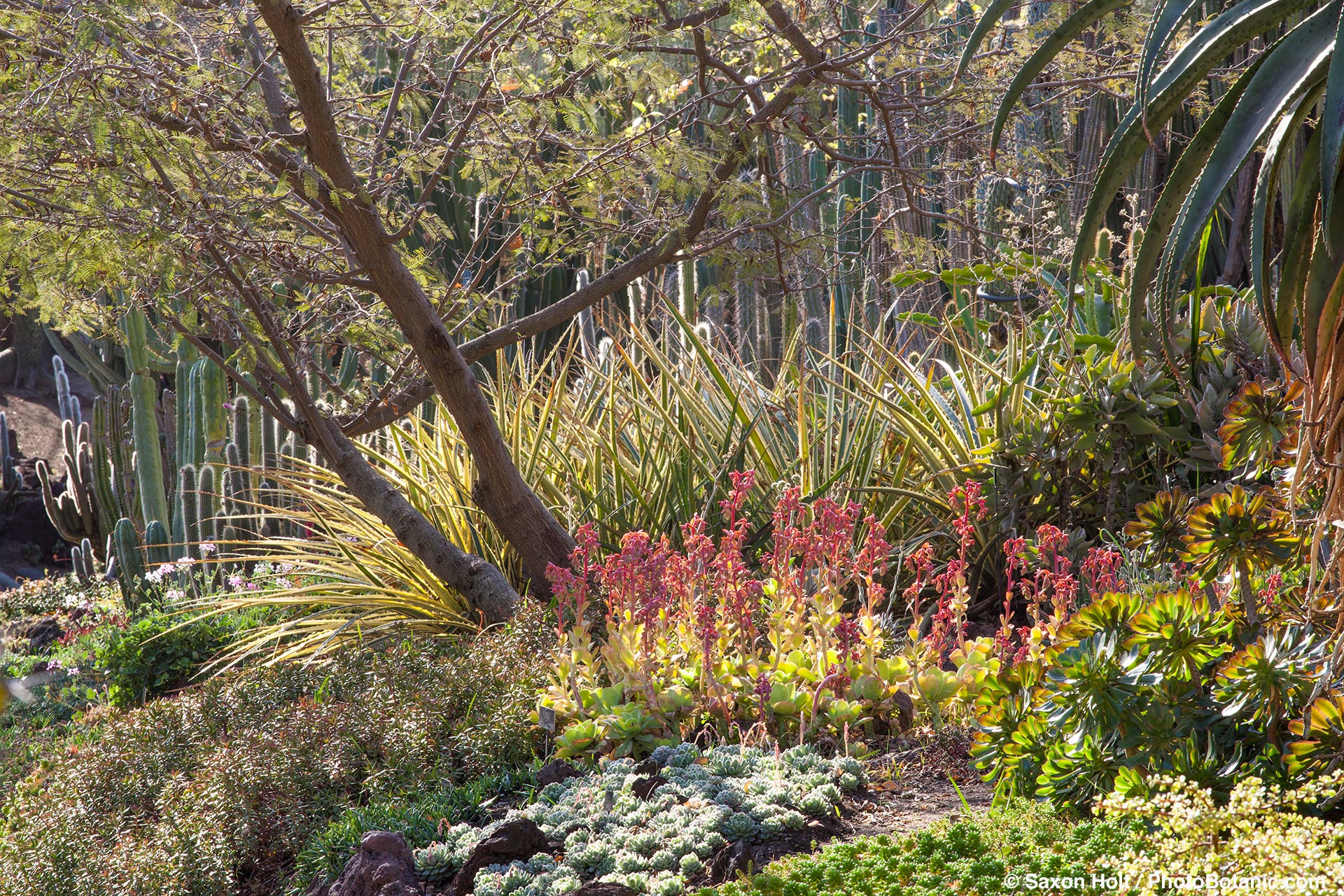 It really is the same plant combination – the two photos were taken five minutes apart.  The backlit photo was taken from the vantage point of the green plant by the path in the center of first photo, looking back.

Look even closer into the middle of the backlit photo, to see the wonderful spikey foliage of a bromeliad, the Variegated Hearts of Flame, Bromelia balansae ‘Variegata’.  Besides being amazed that a bromeliad can be a garden plant in Southern California, look how back light really explodes through the foliage: 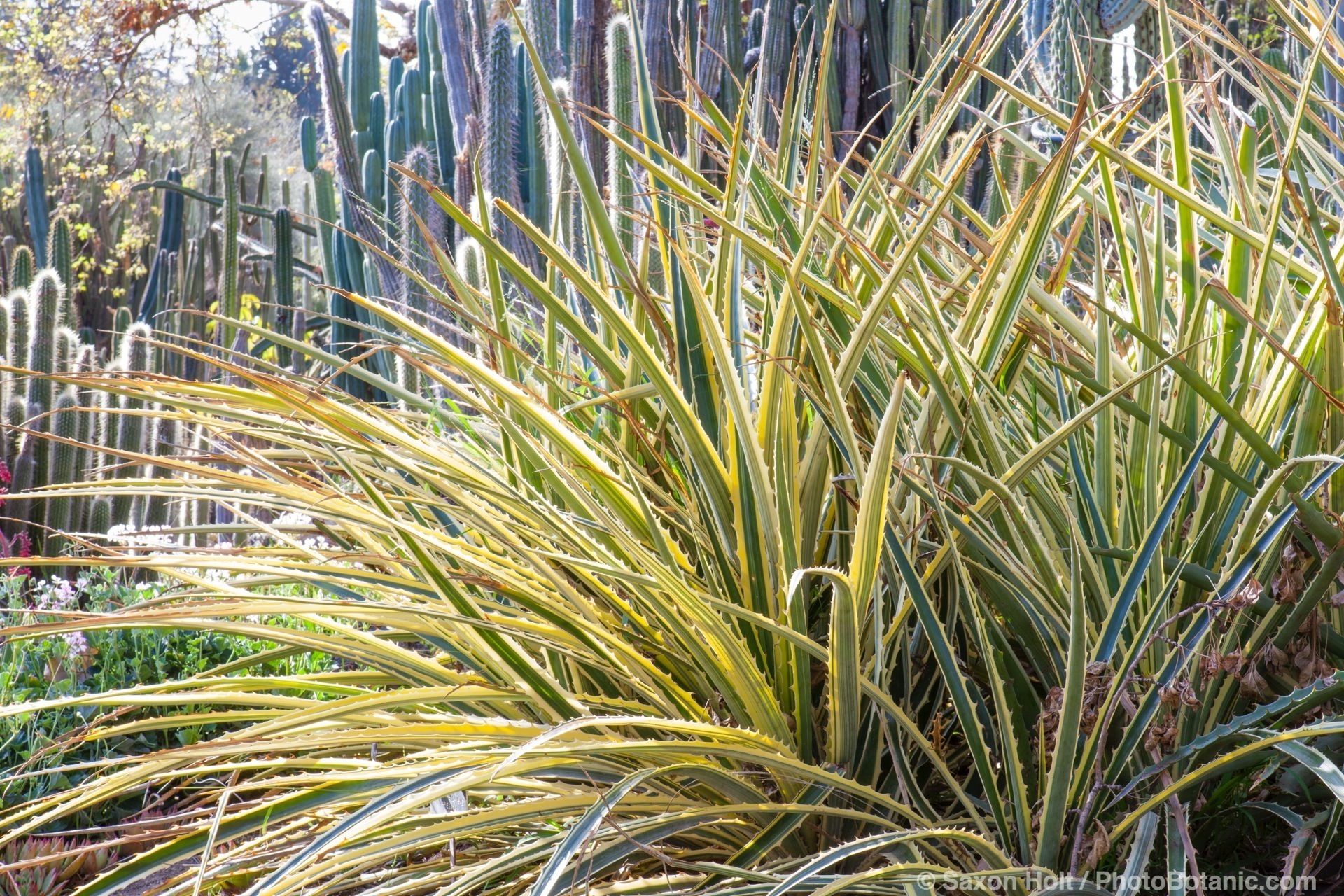 I was now in the Desert Garden which is full of mature succulents which often have nice strong graphic shapes that can make striking subjects.  I began looking for more photos as the sun got higher.

Once I would have given up on finding good photos in this light.  A photo like this group of Aloe would never sell: 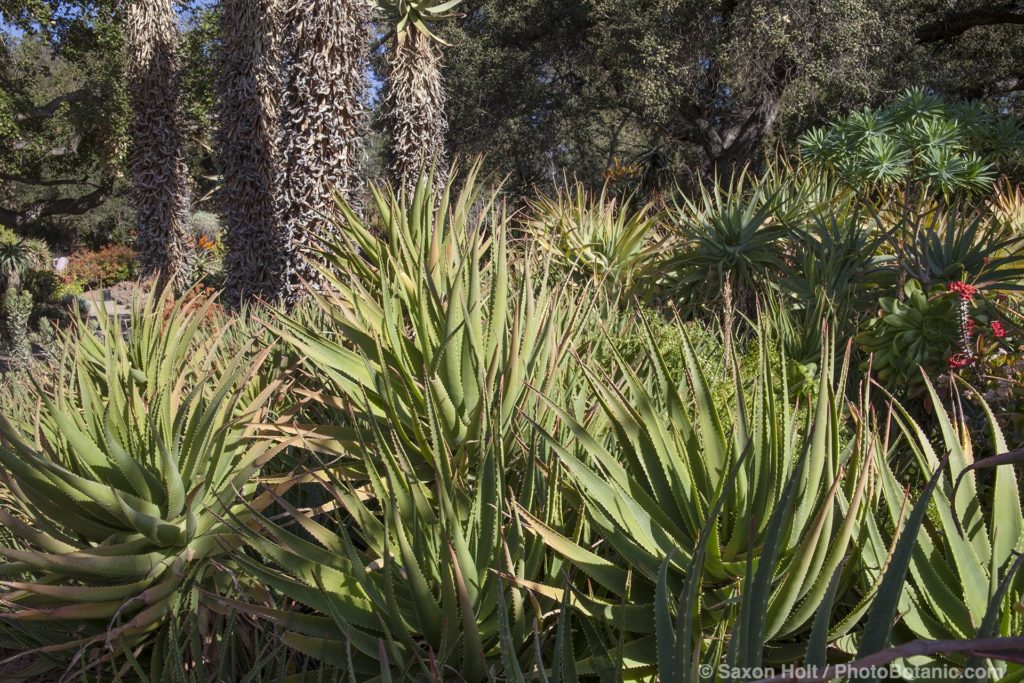 Aloes in harsh sunlight in the Desert Garden at Huntington Library Botanical Garden.

Ahh, but walk around the scene, use backlight, shooting back toward the sun, and it altogether changes:

The Aloe foliage is fleshy and transluscent.  The sun reveals it, back-lit and shining through.

Shall we look at another reason why we should break the Kodak rule of shooting with the sun over our shoulder ? 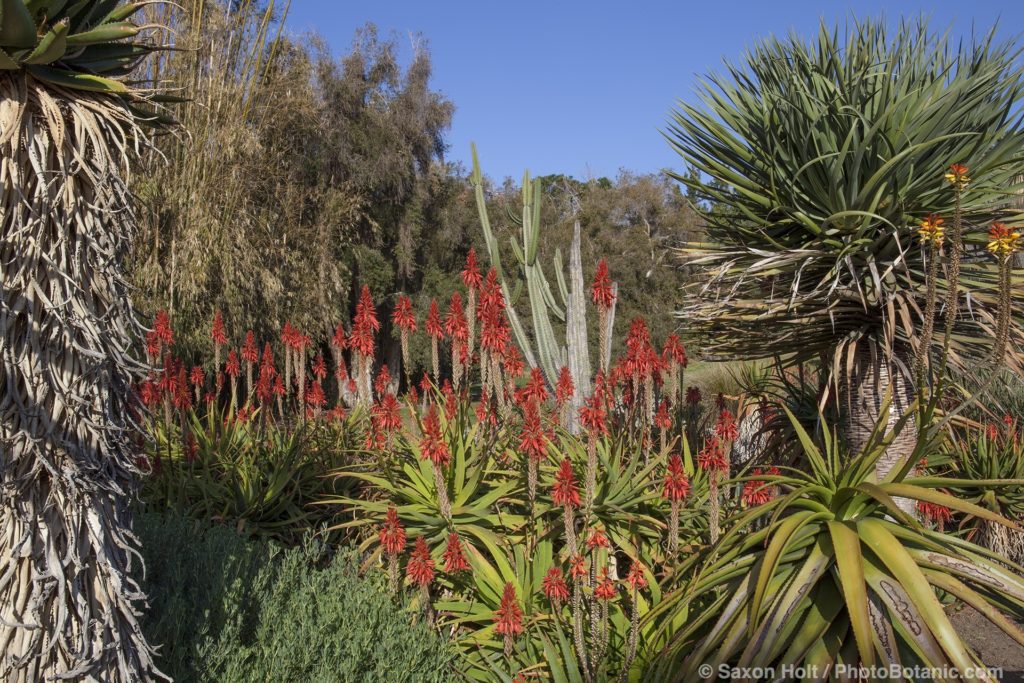 With the sun behind

I suppose some might like the heavy red of the Aloe flowers and the sun full on.  Until we look back toward the sun: 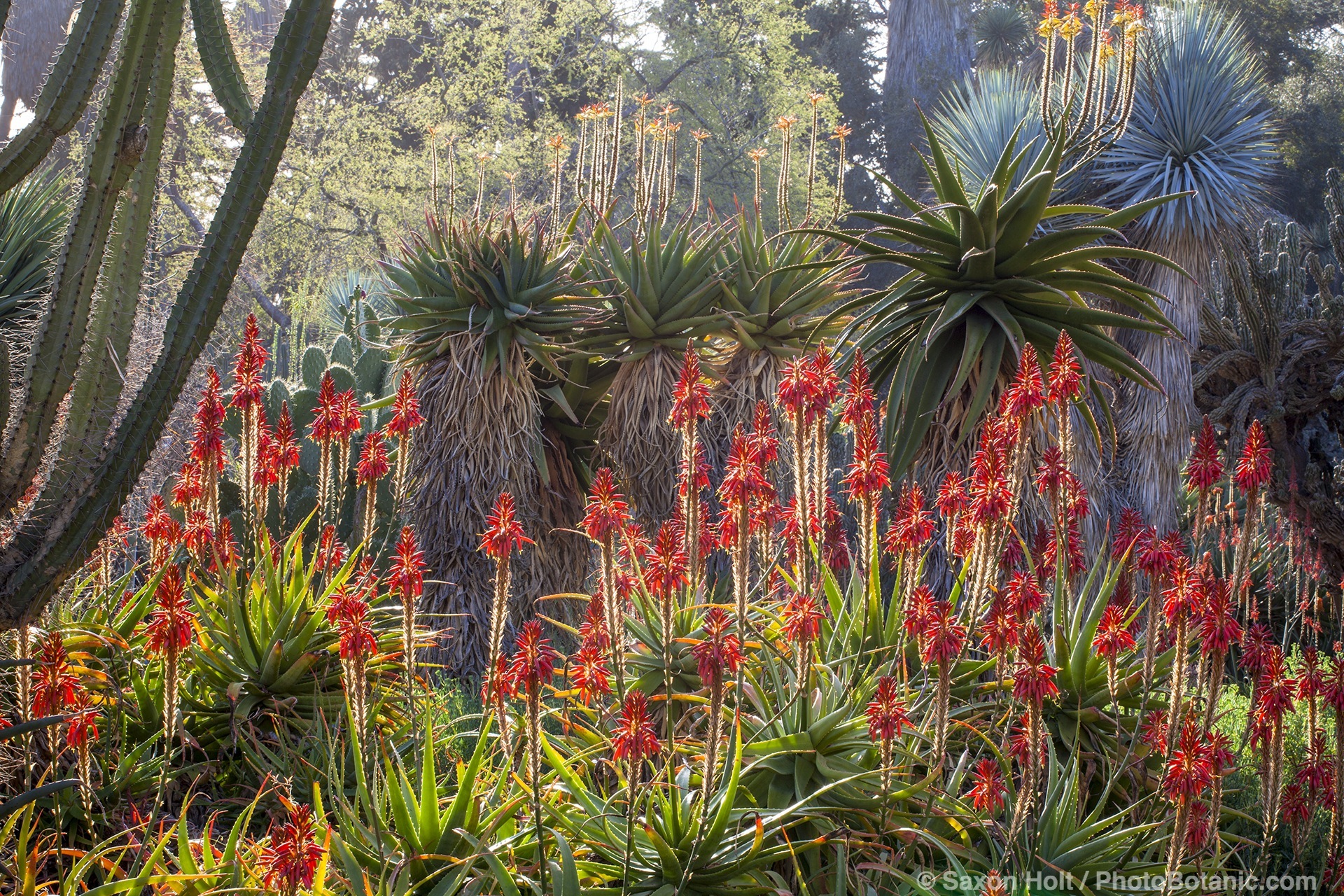 There a few technical tricks to making this work and I go into those tips in the PhotoBotanic Workshops, but don’t give up when the light is hard – make it work for you.