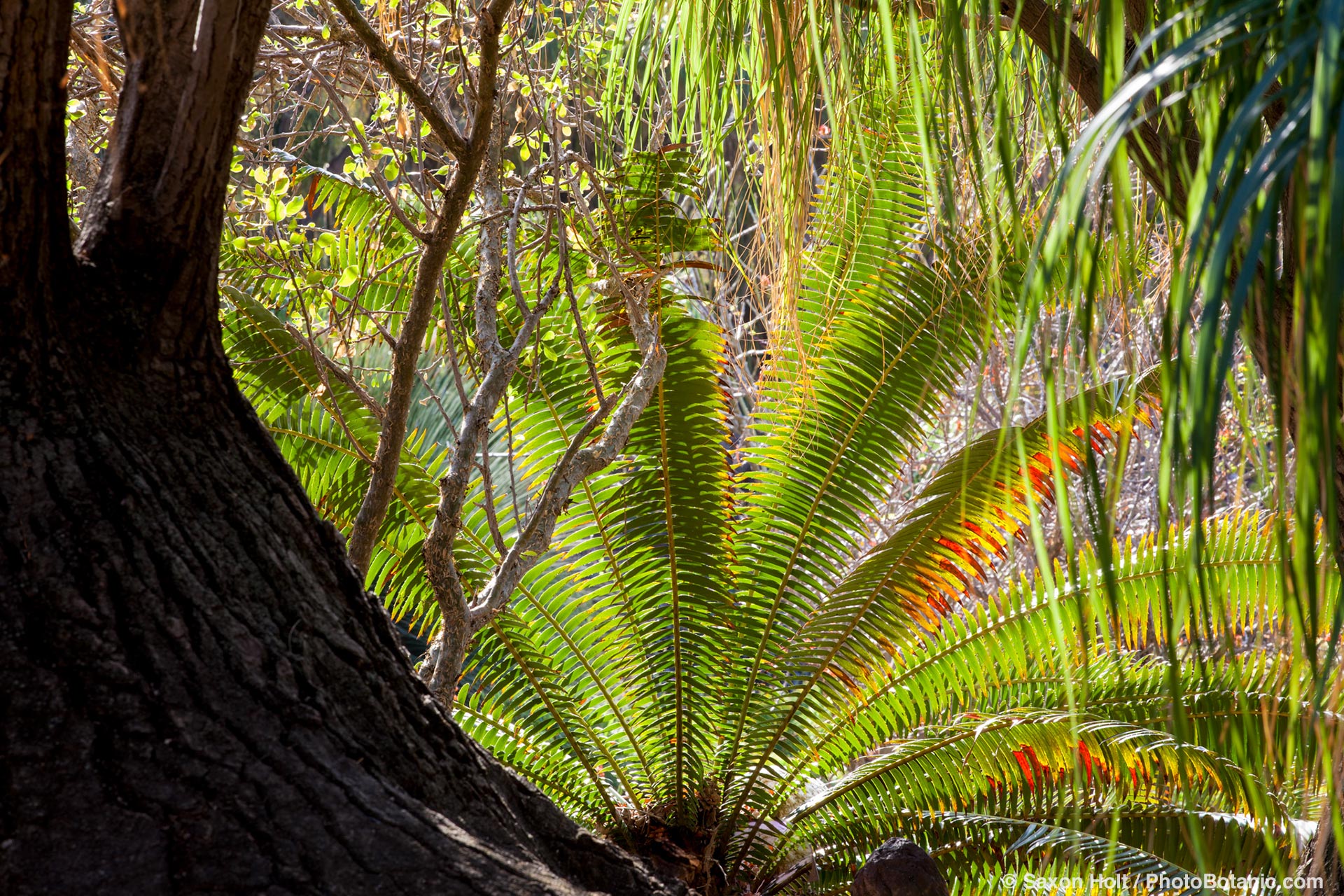 There was a time when I would never shoot in harsh, hard light.  Bright, strong, contrasty light tends to have deep, black shadows and no color subtlety.  As a garden photographer, when the sun came into the garden I would retreat to the shadows where the light was soft.

I always advise beginning garden photographers to find soft light, overcast days or very early mornings and late afternoons into twilight.  But there comes a time on a sunny bright day when you feel the light.  The sun sparkles.  It dances through a garden, marking everything it touches with crisp edges and glowing through foliage, like the stained glass of a cathedral.

On such days you can learn to make the light work for you and let the camera be a tool to capture what you want it to see.  Sometimes that requires breaking a few “rules”, some trial and error, and an acceptance of letting the story be the light itself.  Sometime you just hunger for the light.  Long winter days, rainy days, and days shut in for reasons we want to forget are made better when the sun comes out.

I never felt this more intensely myself after an accident confined me indoors.  That first sunny day I could get out and hold my little G11 camera up to the sun in my garden was a joyous day.  I don’t know whether being in the garden, making a photo, or feeling the bright sun was more important to making me feel better, but I was never so happy to be a garden photographer able to tell a story. 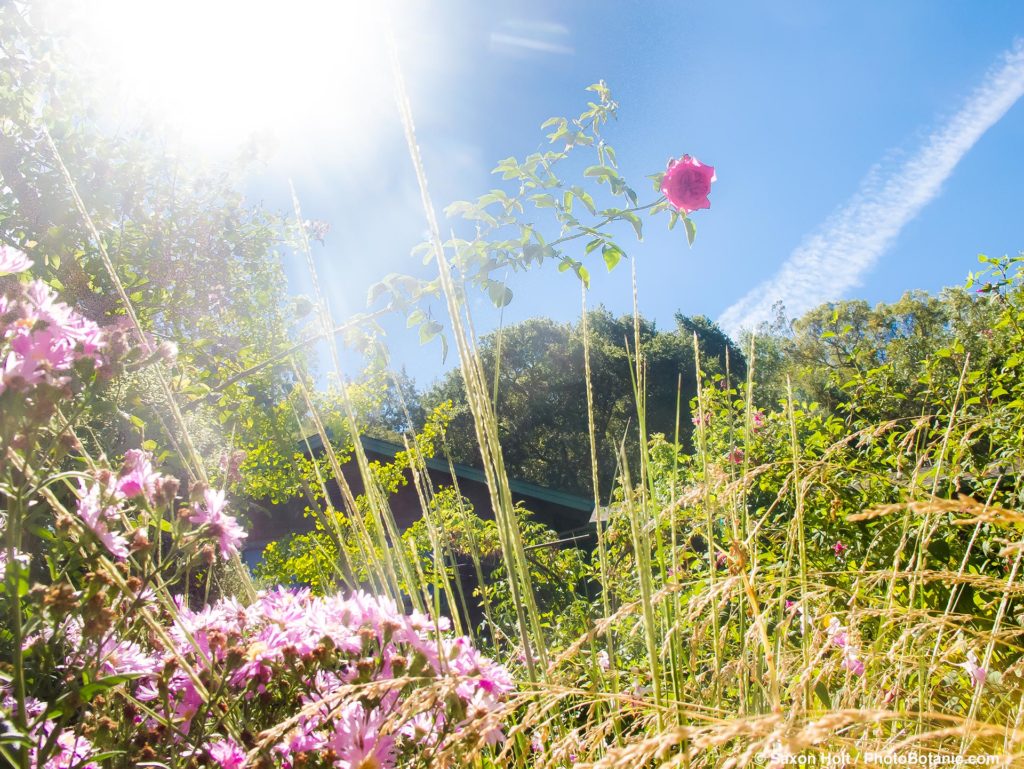 In my garden, feeling the sun, seeing the blue sky 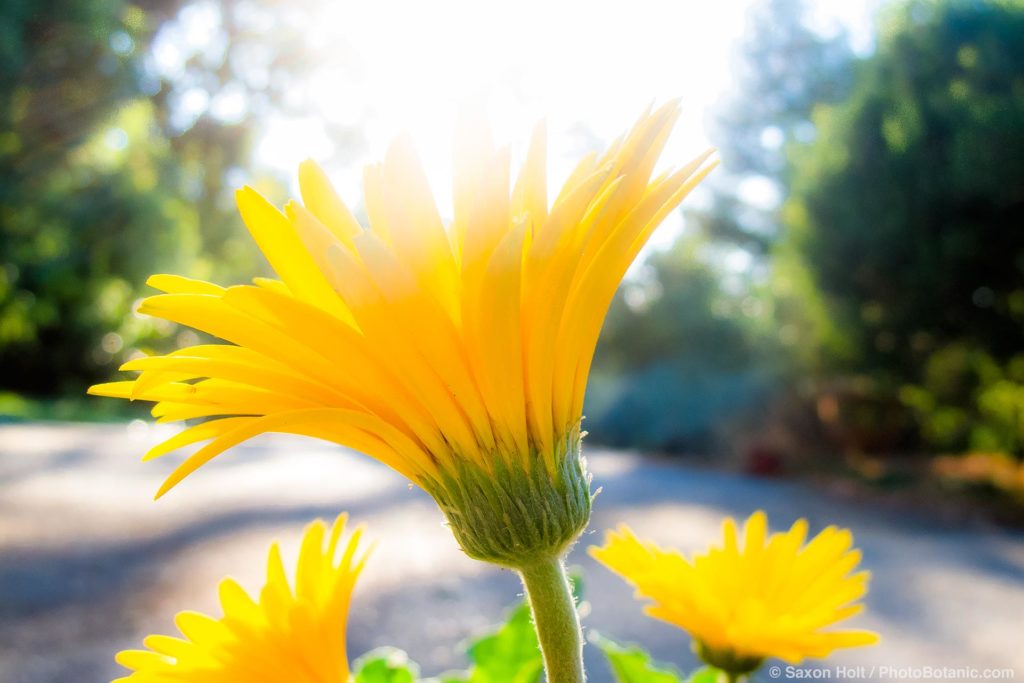 Yellow Gerbera – Warm Sun. How does that make you feel ?

I am a California garden photographer and the sun is an important element of many a garden’s story.  I learned to look for sunny opportunities, sometimes because a client insisted, sometimes because I had no choice.  Elsewhere I have written about finding the soft light, the exquisite clean sunlight of an early morning or the warm glow of evening light, here I will share a few lessons learned when hard light gave me few choices.

On a shoot in Southern California I found myself in the strong sun in the magnifiscent gardens at The Huntington Library.  As is common in California, the sun came up strong and with-in an hour of my dawn arrival the light was too strong for my normal shooting style.  I was looking specifically for Cycads and found the photo at the top of this page, backlit as I stood in the shade of a grove of Ponytale Palms (Beaucarnea recurvata).

Foliage often looks wonderful back-lit –  the stained glass window effect, and since the sun is low in the early morning, the potential for a full-on back lit photo presented itself.  Framing the glorious long leaf-like branches between the palms created a dramatic graphic composition.

As it happens, after shooting Cycads and Araucaria I found myself in the Desert Garden of The Huntington which is full of mature succulents.  It was a February morning and the sun was staying fairly low in the sky.  The sun is a good feature of a desert photo, it is often part of the story and succulents often have nice strong graphic shapes that can make striking subjects, so I was determined to make the light work for me.

Once I would have given up on finding good photos in this strong light.  Photographs tend to get very contrasty and unappealing;  these Aloe, photographed in bad light would never sell to a publisher: 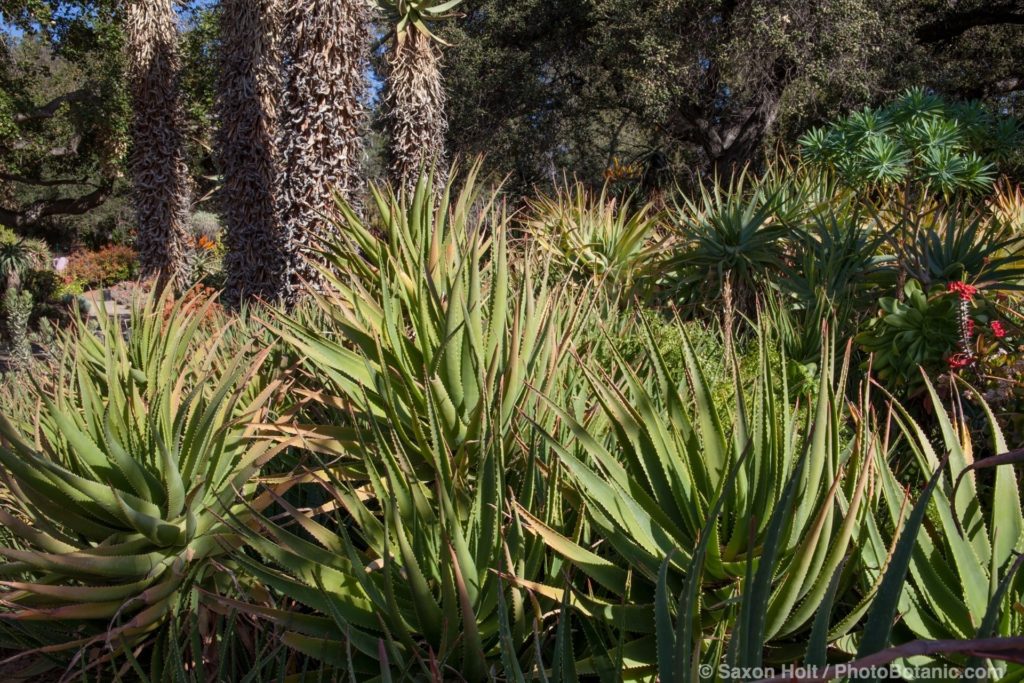 Ahh, but walk around the scene, shoot back into the sun and the scene altogether changes: 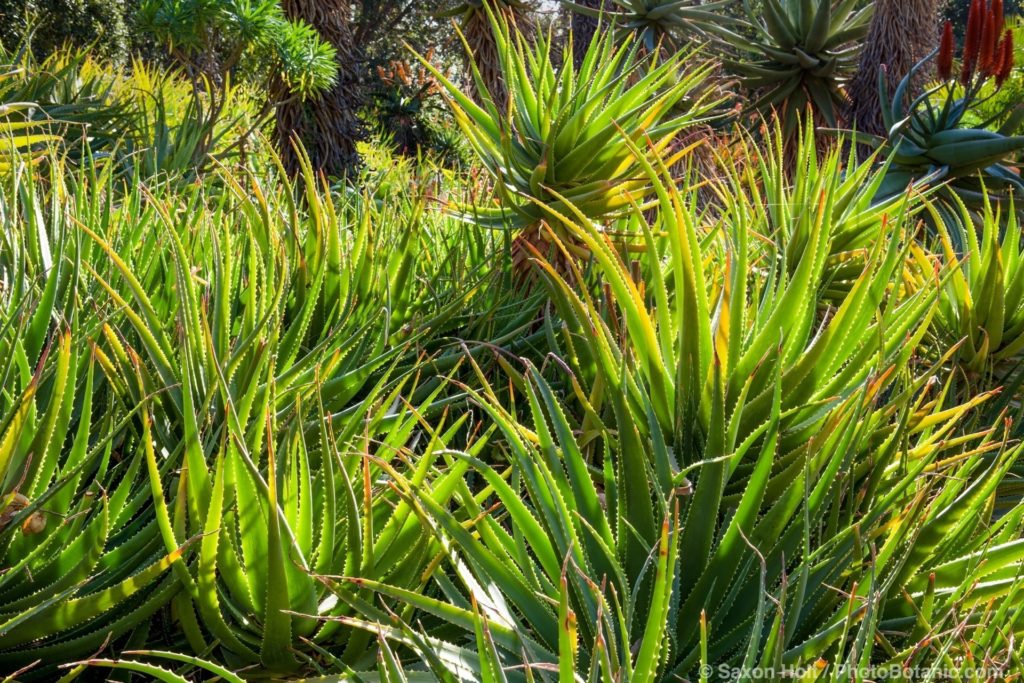 Backlit. the Aloe foliage is fleshy and transluscent.  The sun reveals it, back-lit and shining through.

I began looking for other, even more complex plant combinations on this now quite sunny day:

The photo above is a downright terrible photo, but it serves as a great counterpoint to the exact same group of plants seen from the opposite direction:

It really is the same plant combination, this photo taken five minutes later from the path in the middle of the first photo.  The low winter sun makes this possible – and I began to see many possibilities.

Look into the middle of the photo to see the wonderful spikey foliage of a bromeliad, Variegated Hearts of Flame – Bromelia balansae ‘Variegata’.  Besides being amazed that a bromeliad can be a garden plant in Southern California, look how back light really explodes through the foliage: 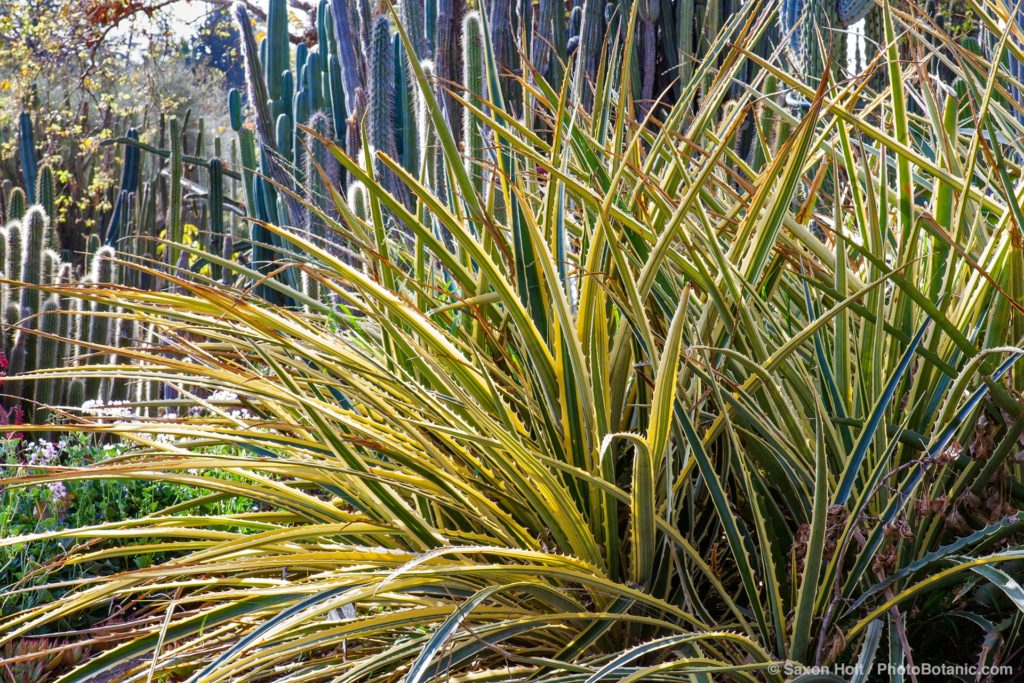 Looking beyond the Bromeliad, notice the tall cactus and another opportunity to let hard light work for you when.  Indeed, backlight sometimes creates opportunities impossible with soft light.  Here we see rim light taking affect. 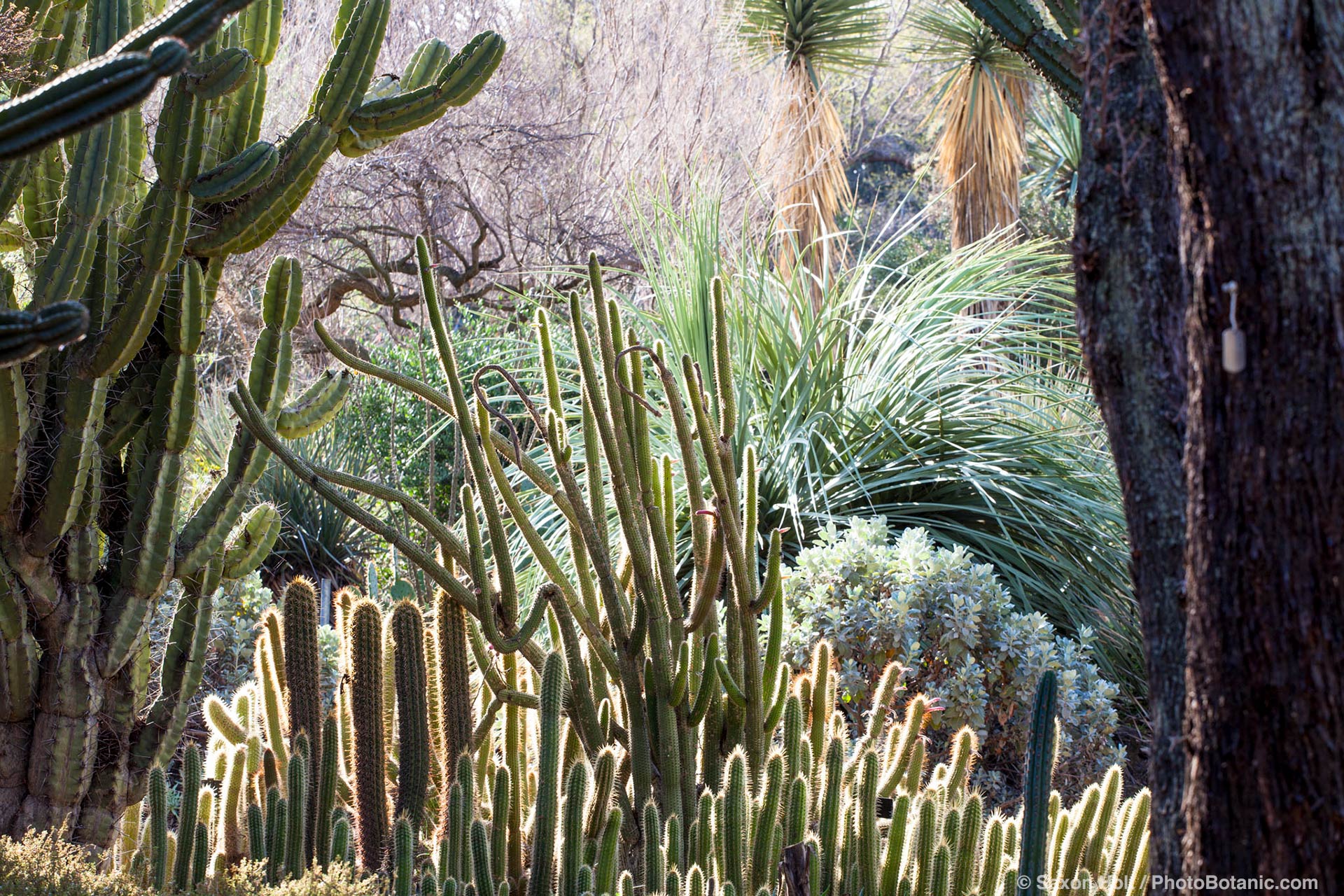 Rim light, the bright highlights created by sun coming from behind the subject and outlining the edges, is especially effective with thorny cactus, making the outlines glow.  In such cases you will want to overexpose what the camera meter will tell you so that the bright areas stay bright and the shadow areas have some detail, and are not completely black.  This photo is also made stronger by framing the edges with the darker cactus and allowing enough distant view to pull the eye deeper into the garden.

Once upon a time, in the earliest days of color photography, we were told to keep the sun over our shoulder.  I am not sure why, other than shooting toward the sun is difficult for a camera meter and back light can create lens flare, but when the light is behind us, the garden will look flat and especially contrasty.  Look at these red Aloes; now the sun is even higher. 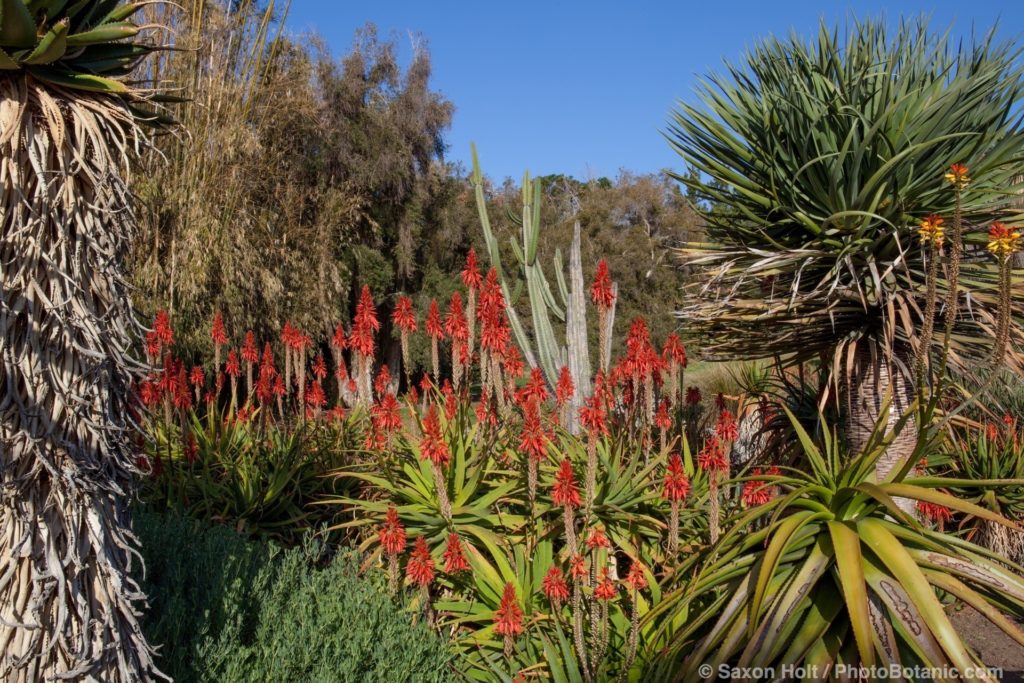 I suppose some might like the heavy deep red of the Aloe flowers in the full, direct sun.  Until we look back toward the sun: 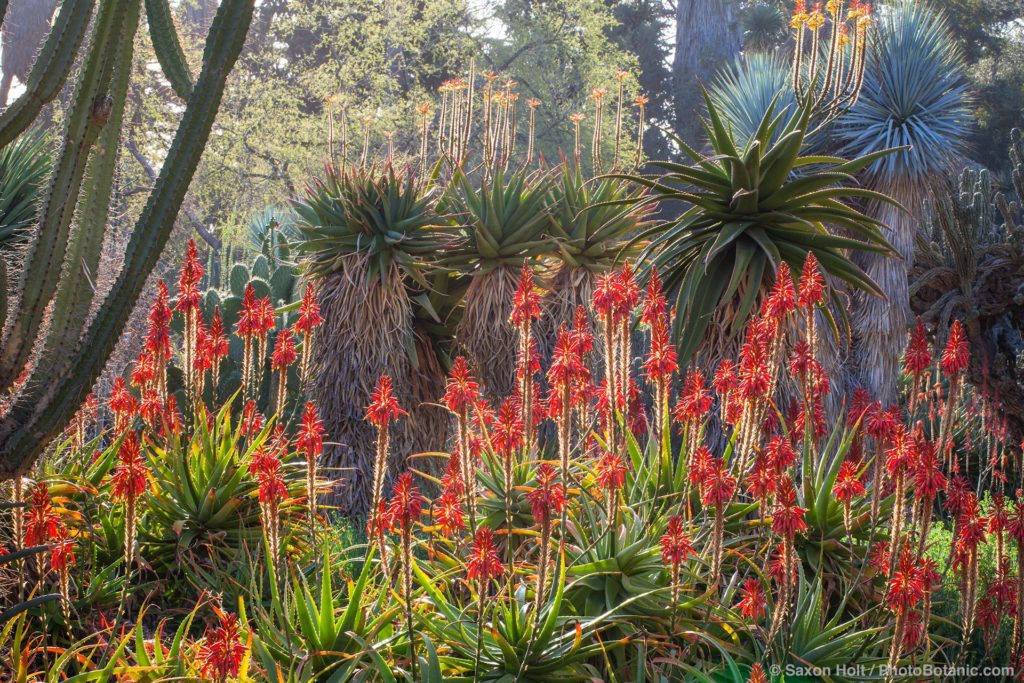 The sun now outlines the plants and makes the colors glow.  As I stood there, realizing how the light itself was transforming the garden, I searched for other compositions. 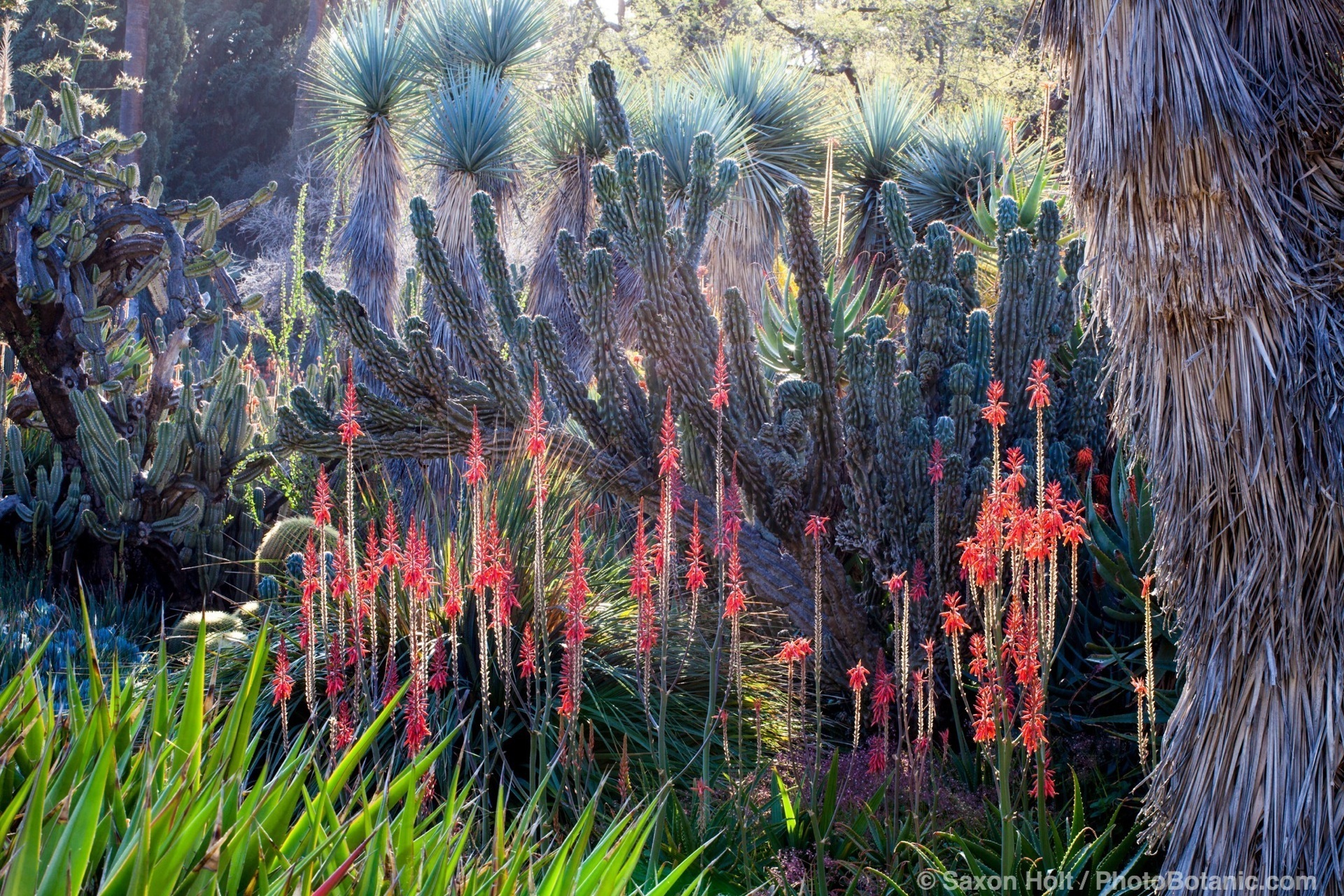 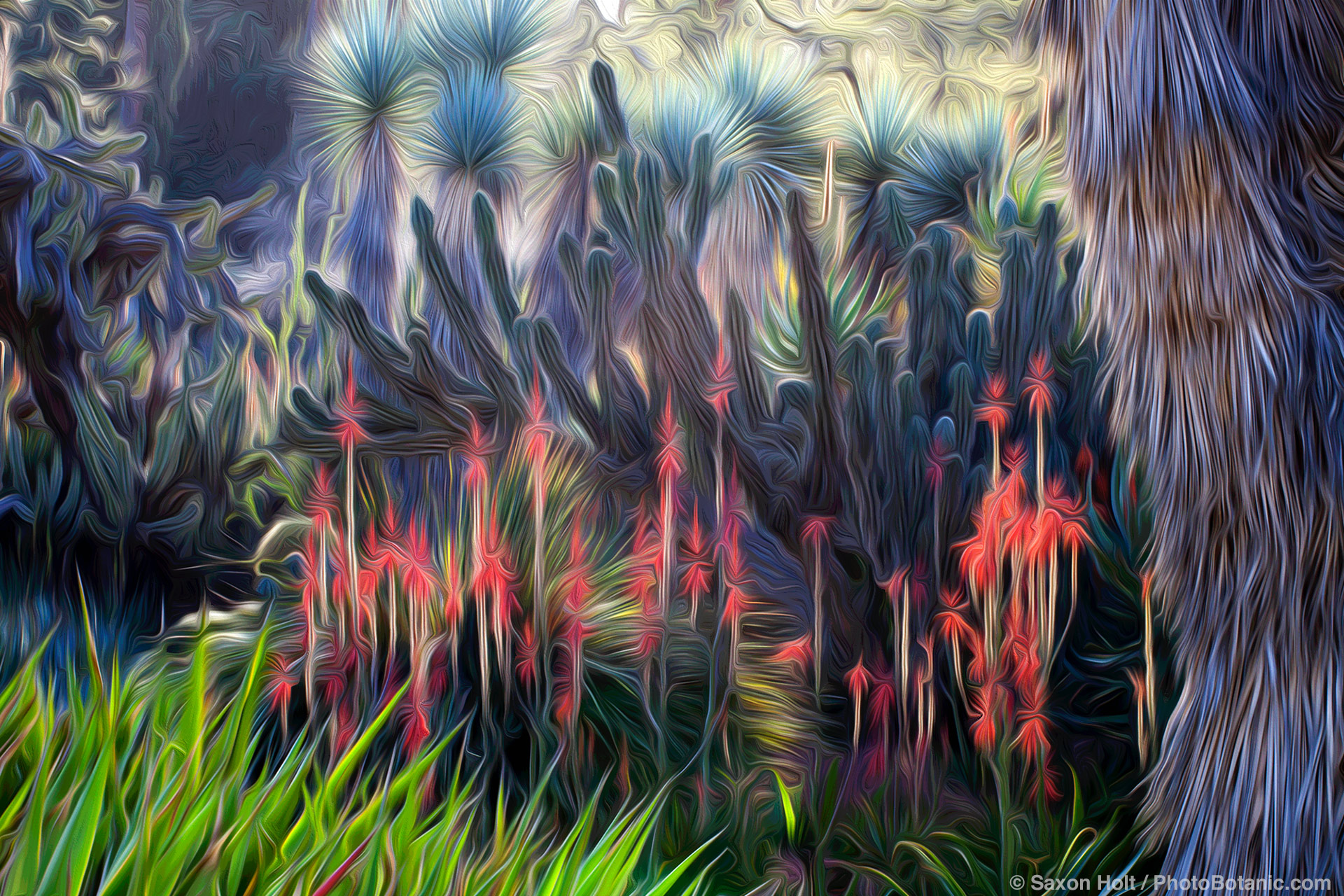 We sometimes have these magic moments as photographers, more so that other artists I think, because we become immersed in looking and can quickly act when we suddenly see what the fleeting light presents.  Sometimes the moment is gone in a flash, other times the instant of seeing comes from hours of watching the light move through the landscape.

This moment of contorted shapes, with the light swirling through and around the garden, I knew I would need some Photoshop tools to bring out the swirls.  The light was getting higher and I was losing the translucency but the light was still dancing. 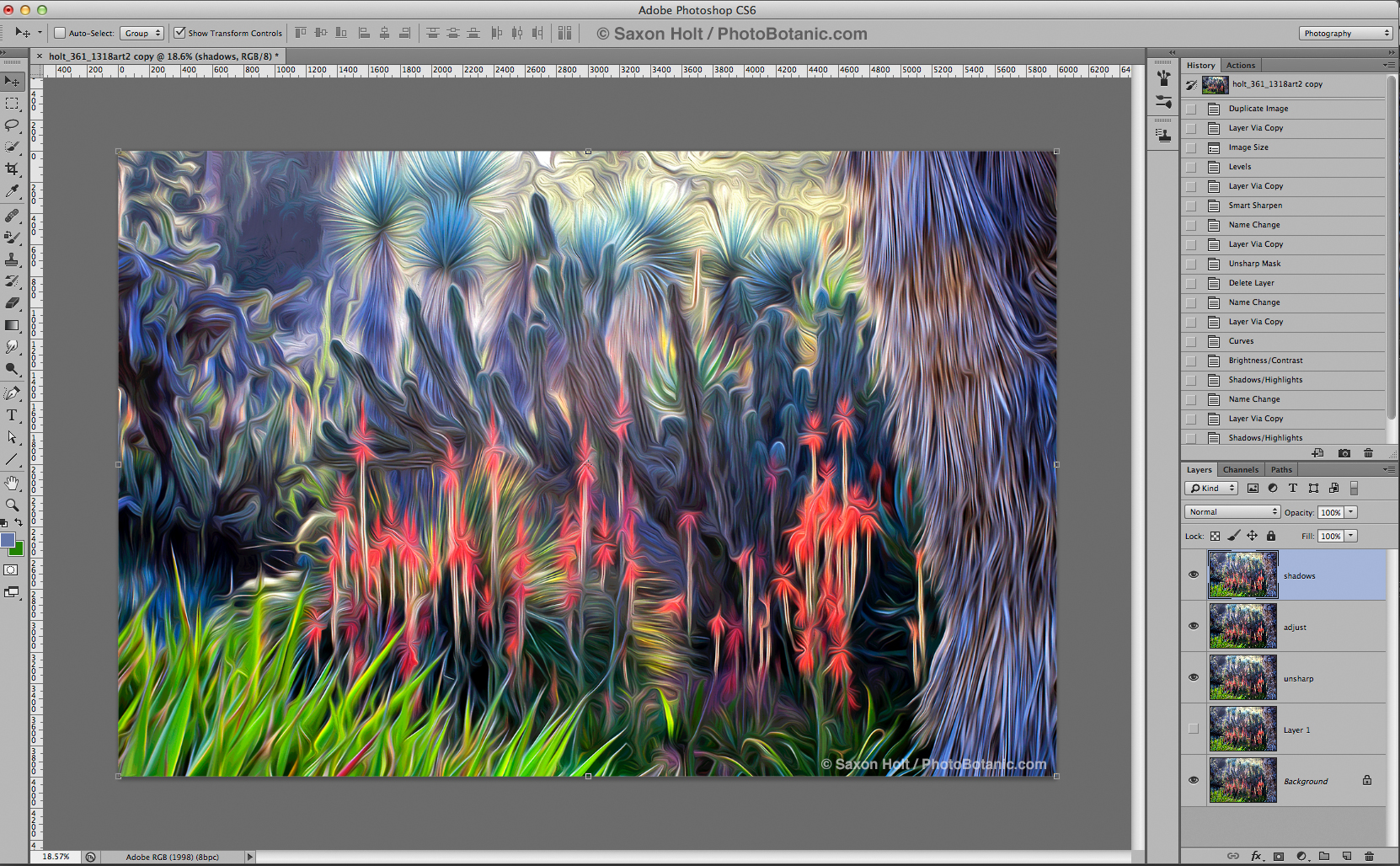 The technique to transform this image involves adding an art filter layer ( I used Photoshop Oil Paint here) to a medium resolution file size that can take best advantage of the filter and its control panel.  I then up-res the image and do quite a lot of adjustments to the enlarged image so that it can be printed as a big print.  Every time I work with Photoshop filters I use different techniques to get the affect I want, so there is no specific recipe that would be useful for another image.  The key thing is realizing the final print will not have the same pixel structure as a straight digital file, and will not “fall apart” as a large print.

This print is available in various sizes and  in the PhotoBotanic Store. 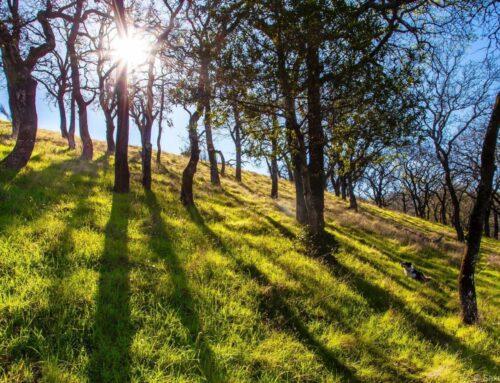 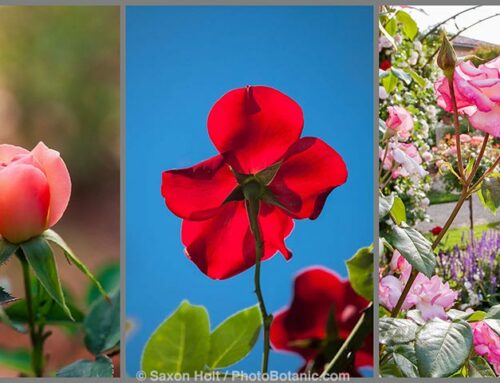 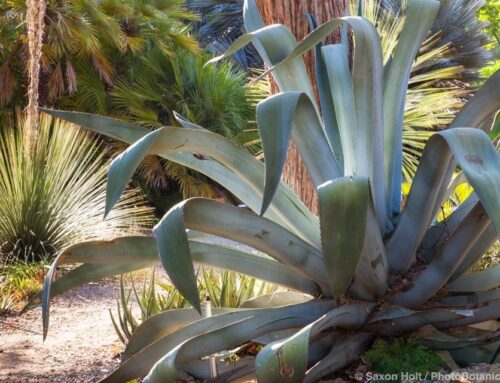