How to Photograph an Eclipse
Next

The 2017 superbloom in the California deserts was a sensation.

The superbloom began in late winter in the southern most deserts and progressed northward, even into late summer in the High Sierra mountains, a result of ample rain after five years of drought.

All the photos seen here are in the Sonoran Desert east of San Diego in the most southern part of California at Anza Borrego State Park, where the good winter rains brought a spectacle of bloom that, in turn, brought tens of thousands of gawking flower lovers to the desert.

Most were drawn to the vast fields of annual wildflowers that carpeted the broad valley floors between mountain ranges, but as a gardener I was attracted to the mix of perennials, shrubs, and cactus that were also having a superbloom. There was much for a gardener to learn about how nature combines plants, how she covers the ground, how the natural spacing and heights of plants work in the wild. 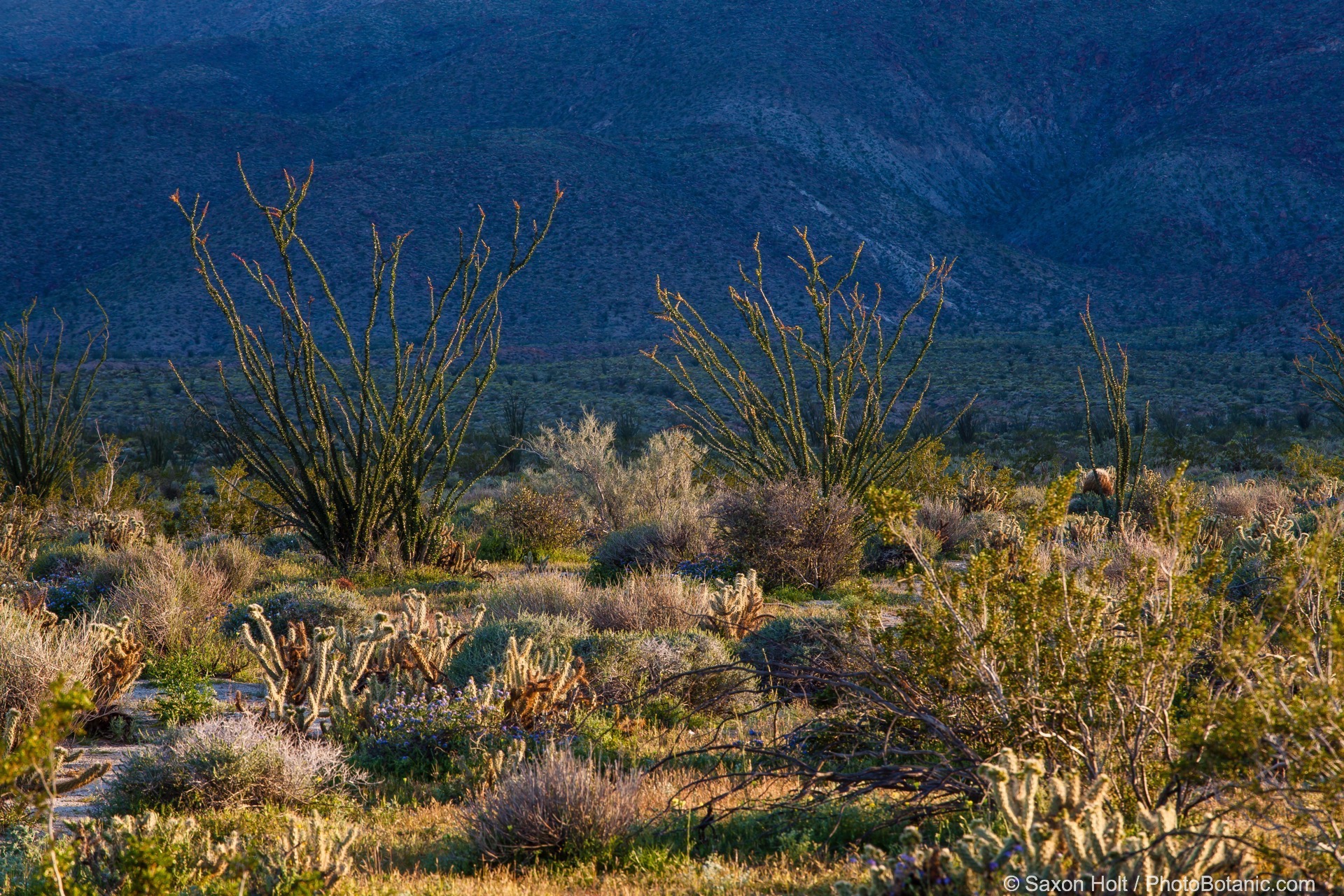 Before I became a garden photographer, and as I came to appreciate native plants, I took photographs that I hoped would inspire gardeners to bring native beauties into their gardens. Now when I photograph the native landscape, I can’t help but see the gardens that nature creates. After years of admiring gardens and learning to appreciate the mix of shape, color, and textures that a good gardener considers, along with bloom time, repetition, water use, hardscape, and borrowed scenery when deciding which plants to use in a design, I now take that knowledge back to the wild when I photograph. I see gardens everywhere.

I had never been to the desert for a superbloom and admit to being astonished by the acres of perennials and shrubs that were enjoying a spectacular year along with the annual wild flowers. I felt like the proverbial kid in the candy store, treats everywhere. I camped on a dirt road away from any trails and at first light just walked into this dream, eyes wide, alert to nature’s plant combinations.

To me, the highest form of garden plant design is the art of a mixed border, where different types of plants are combined to fill the vertical and horizontal spaces with complimentary shapes and colors.  Here is how Mother Nature interprets the mixed border in the desert. Against the background of the tall dark green, yellow flowering Creosote Bush this tapestry of succulent cactus and annual wild flowers would make any desert gardener envious. All that is needed to make this a garden in the real desert is the camera to frame it.

Cactus have become increasingly popular in drought tolerant Gardens, and garden designers often suggest softening their tough spiky look by planting annuals around them. Perhaps as seen here in the wild ? 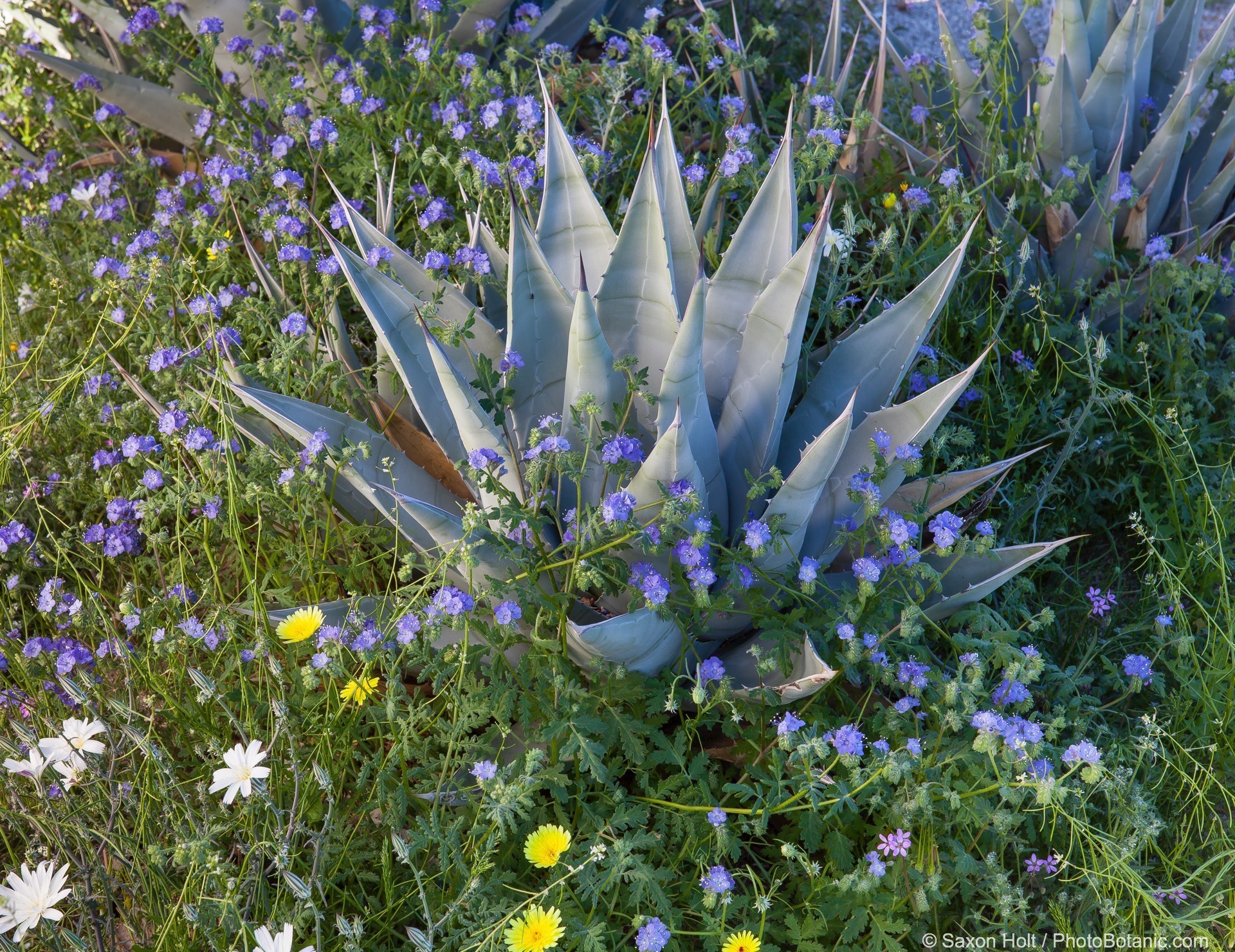 As I wandered in the desert looking for photographs I found myself working into the canyons and washes where the rocks provided background and shelter from the bright sun.  The rock formations helped create a sense of intimacy and also provided a bit of scale whereby I could really start to see garden vignettes, contained. Of course no constructed rockwork feature could match what nature provides. Fantastic.

The taller hills provide a background for these backlit Chola cactus so that one can almost imagine them placed in the garden with a building behind them. As the light streams into a garden a photographer looks for any opportunity to use backlight against a shadowed wall, as I did with these poppies in this sheltered desert canyon.

The narrow canyons provided great opportunities to see plants with rockwork and the natural erosion that was deposited in the dry washes created soft pathways of the finest crushed rock. 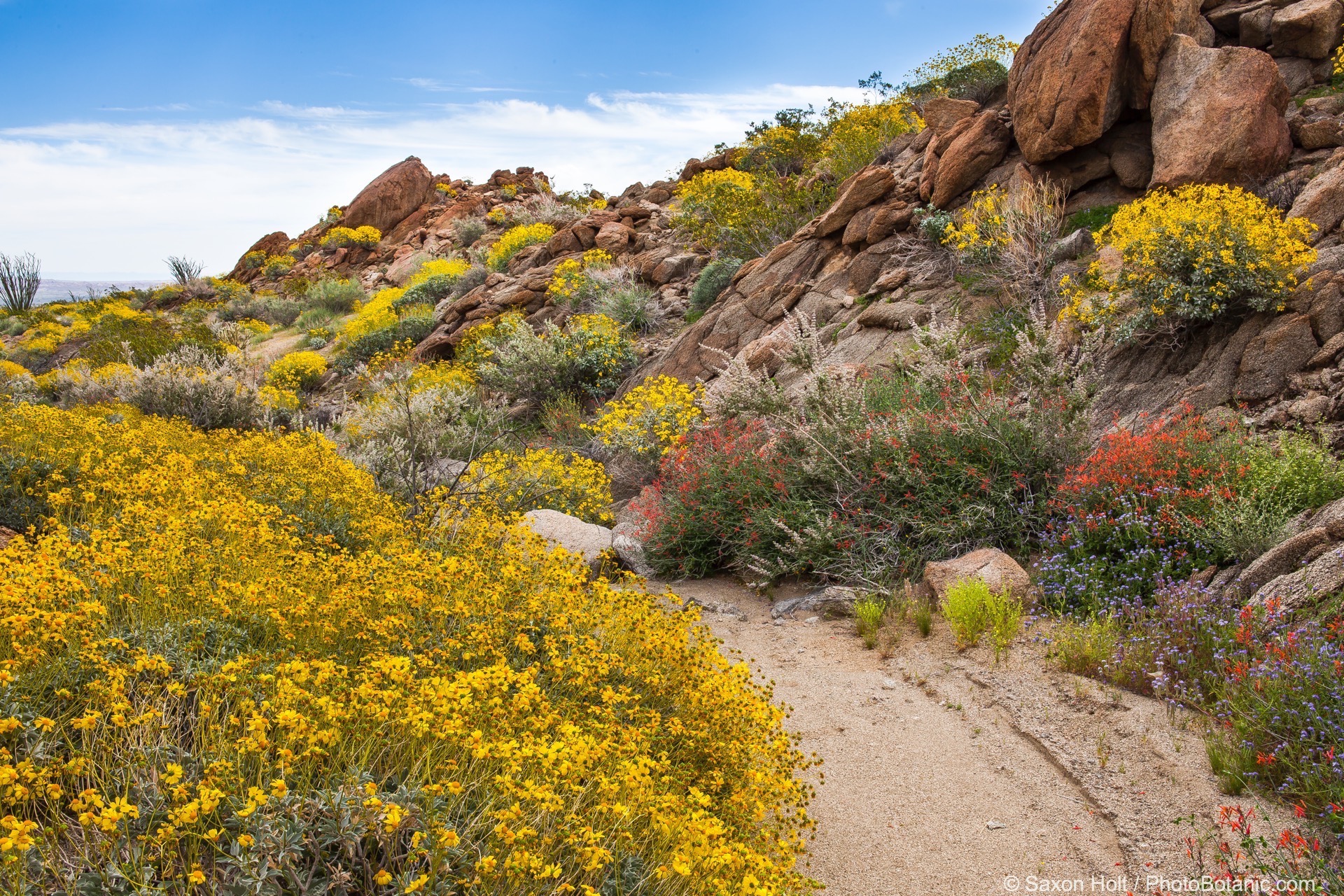 Along these pathways we see borders of flowering perennials spilling out on the paths against the background of the rock walls. Back in the larger canyons with more flat bottomland I sought out taller plants to frame my compositions, just as a gardener might design with vertical punctuation points to help organize the garden.  These Teddy Bear Cholla cactus (Cylindropuntia bigelovii) bear no resemblance to the little pots we so often see in nurseries. 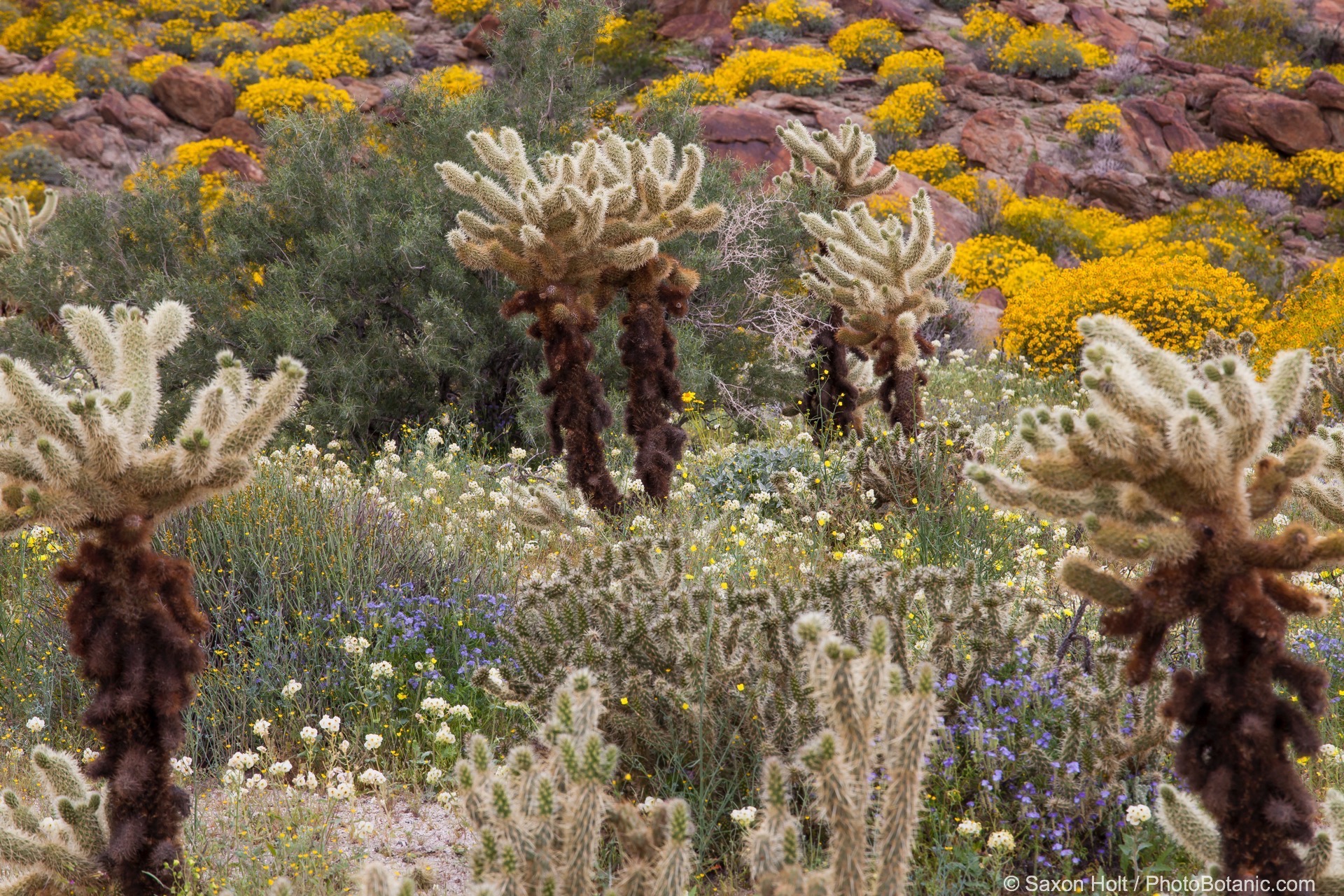 Another native shrub, Simmondsia chinensis, Jojoba shrub, in a bed of Phacelia. The Coyote Bush was a revelation.  It seemed almost as common as the Brittlebush (Encelia farinosa), it’s profuse yellow flowers set off beautifully by the dark green foliage. It would be a workhorse, the go to shrub for many mixed borders in the desert.

Here we see it amidst the Brittlebush and Ocotillo (Fouquieria splendens). Notice the beautiful gray leaves of the Brittlebush, a silver foliage prize sought out in the most sophisticated designs. The Ocotillo is a prized element too for many desert gardens; it’s explosion of vertical limbs is graphic and stunning. It’s tough to grow well outside of the desert because it requires hot dry soil with fast drainage.

But of course this is a trick of any naturalistic garden, finding plants that are naturally adapted.  Any of these vignettes I found in the desert would qualify as a garden. All you need to define it as a “real” garden is to add a bit of human construct to make it look a bit tame and intentional.  Perhaps a fence to claim it as a garden ? I found this garden as I drove through the small town of Borrego Springs, the headquarters of Anza Borrego State Park.  This garden, effortless in Borrego Springs, would be virtually impossible to do and the sprawling cities along the heavily populated, coastal regions of California. Here in this place, the gardener simply embraced the native landscape.