Rain Drops and Broccoli
Next 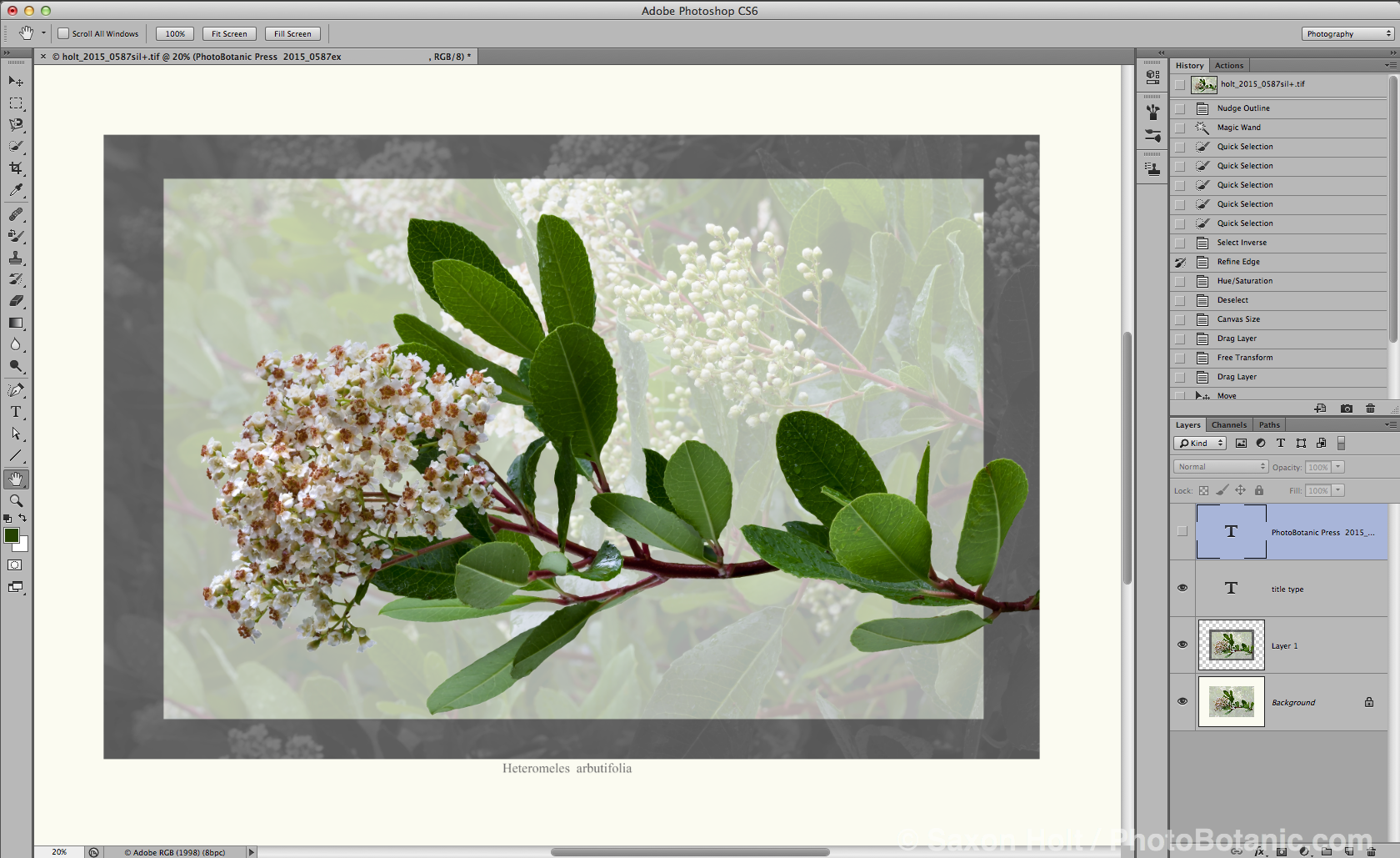 I have added another California native shrub to the extraction series, Toyon – Heteromeles arbutifolia.  Extractions are photobotanic illustrations that are inspired by classic botanic illustrations done in a studio, but have the feel of coming from the garden, of being extracted from a scene.

By extracting the illustration from a photograph, I feel as if I am giving specific context to the viewer and celebrating the real plant as found in nature.  Sometimes when we see a drawing of a plant we are not quite sure it is real – a photobotanic illustration leaves no doubt.

The process is tedious but a delight as the branch begins to emerge.  It can be broken down into sections and I will illustrate them with screen captures showing the evolution.

I begin with visualizing a branch within the shrub that can be isolated.  The image is then enhanced to bring out details, followed by creating a mask to separate it from the background.  After the background is faded and the branch is now extracted, I crop into the overall scene to create a dark border that makes the branch jump out with some 3 dimensional qualities.  Finally I add extra margins and type. 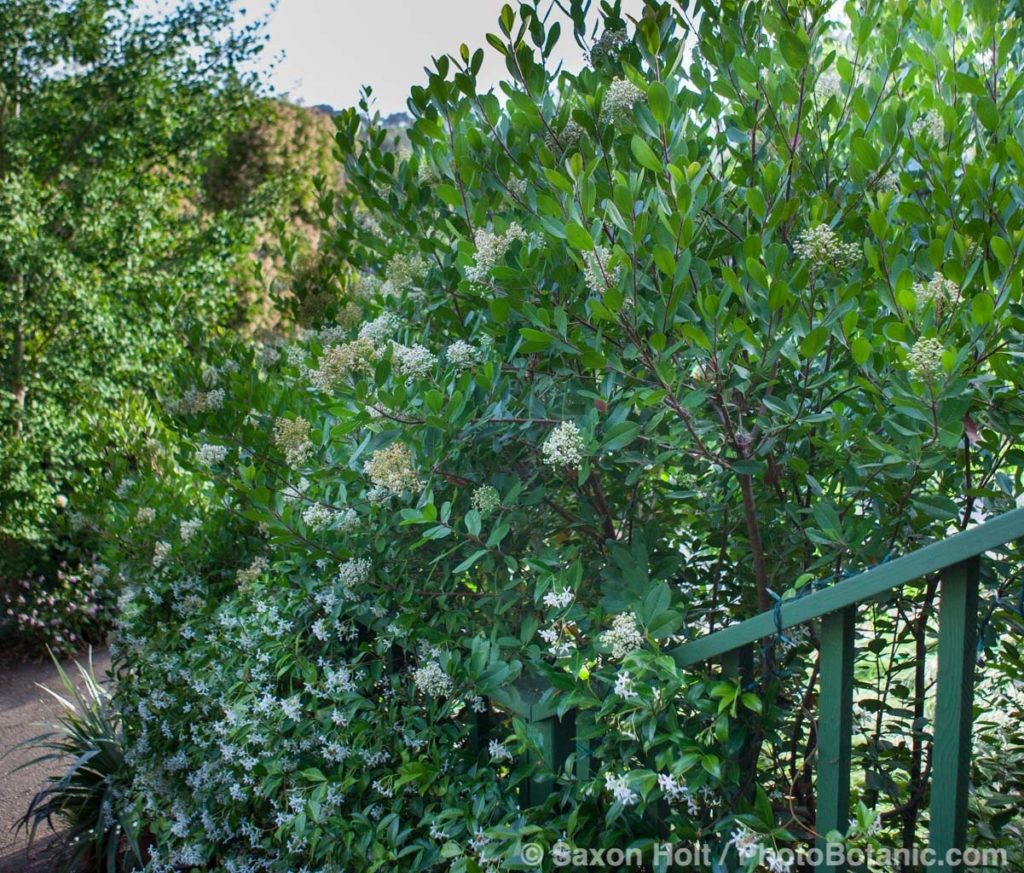 It starts with the plant in the garden, and this Toyon is planted by my front steps to be a hedge that hides the structure.  It is very happy in my garden, grows fast, and needs to be pruned twice a year.  I will have to prune it soon after flowering, though that removes the berries that form late in the summer.  Toyon is also known as Christmas Berry and this particular one has yellow berries, the cultivar ‘Davis Gold’.

I look for a branch that will silhouette itself with the extraction process.

Toyon branch extracted from the garden.

As part of the process, I enhanced some of the details, giving them an illustration filter. The filter I used here is from Topaz Labs and is called “Clean”.

As with any filter that plugs into Photoshop, there are specific controls to get just the right effect without overdoing it.

If you look at the far right side of the next screen you will see the various sliders that are available.  Be sure to move the slider to see the different settings on the right. I did not want to make the affect too obvious and used the more subtle settings in the left side (before) image.

The “Clean” filter from Topaz Labs.

After enhancing the details I began the selection process of isolating the branch.  In Photoshop there are several very powerful and very specialized tools to select parts of an image.  The selected part looks like marching ants and you can the make a mask that allows selective changes to those areas not covered by the mask.

In this case, the mask covers up the branch so that I can make the background lighter, but not all the way to white which would resemble an illustration.  I want to leave some of the garden scene in the background so that the branch seems extracted.

The mask selection process is very exacting.  There are many small openings between the flowers that need to be masked.  For those familiar with the selection tools, I began with Quick Selection Tool for the overall outline, then used the Magnetic Lasso tool to “stick” the marching ants to the edges.  Then, at 500% magnification, I use the Polygonal Lasso Tool to slice out the tiny curves that the Magnetic Lasso could not garb.

Next begins the process of putting the photo onto the paper with borders.  I expand the canvas size of the file, and when you do this, Photoshop gives you color choices to fill the new, larger area.  I use a very pale ivory to give the paper bit of tint. I like to give the extraction series a lot of extra room when I expand the canvas size because I will be adding type, and in the end, after printed on art paper, I will rip the edges to give it a deckled look.

To make the branch seem to jump off the page I add a dark border.

The process of creating the border requires making a new mask so that I can darken just the outer edge.  I am sure to cut the mask so that the leaves and small red branch are excluded from the mask and the darkening. 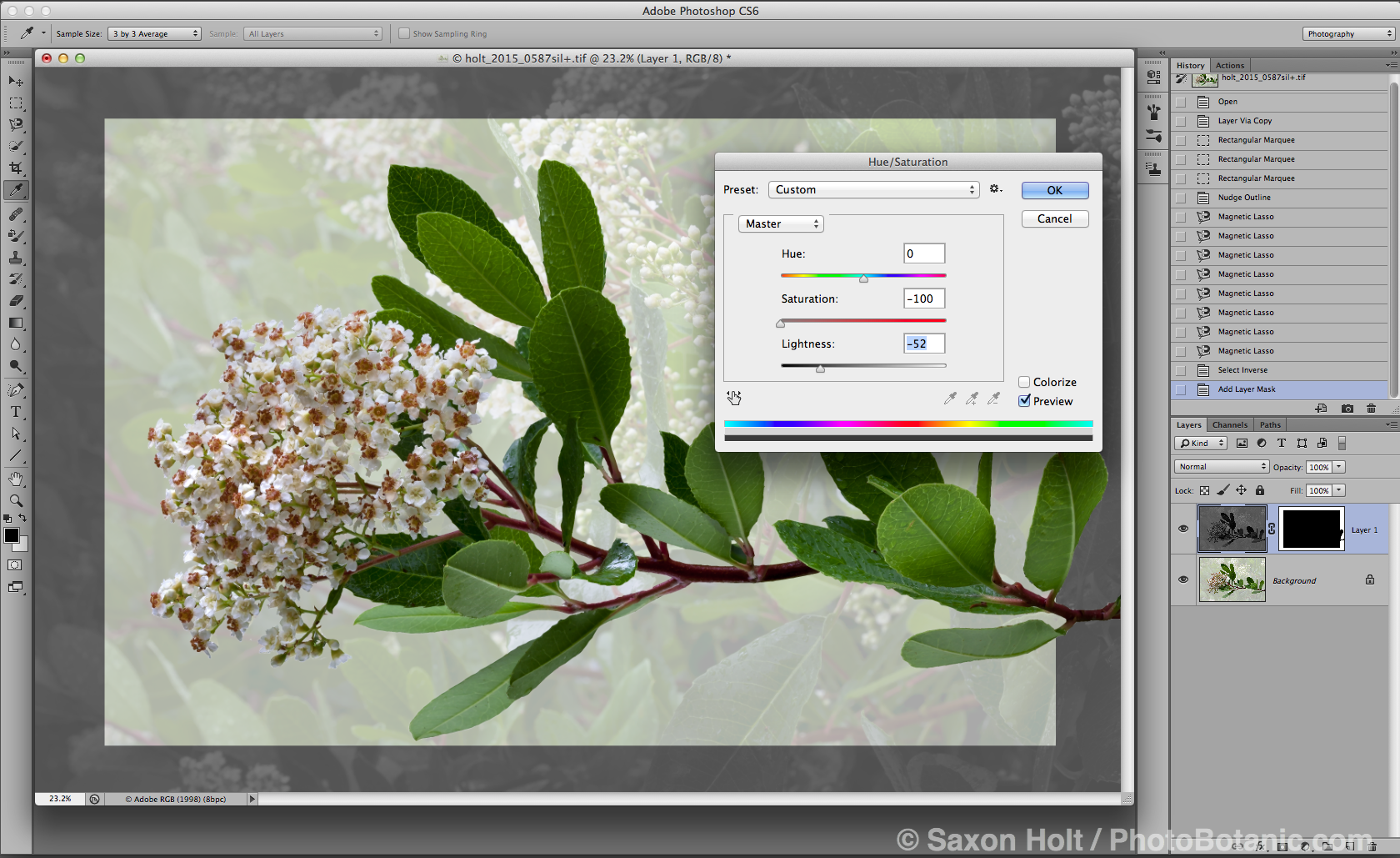 The image is now ready to have the type layers.  One layer right under the image is for the title, and one type layer is for the PhotoBotanic Press file identification and copyright.  I assume anyone wanting frame the image later will hide the lower line of type behind the mat. 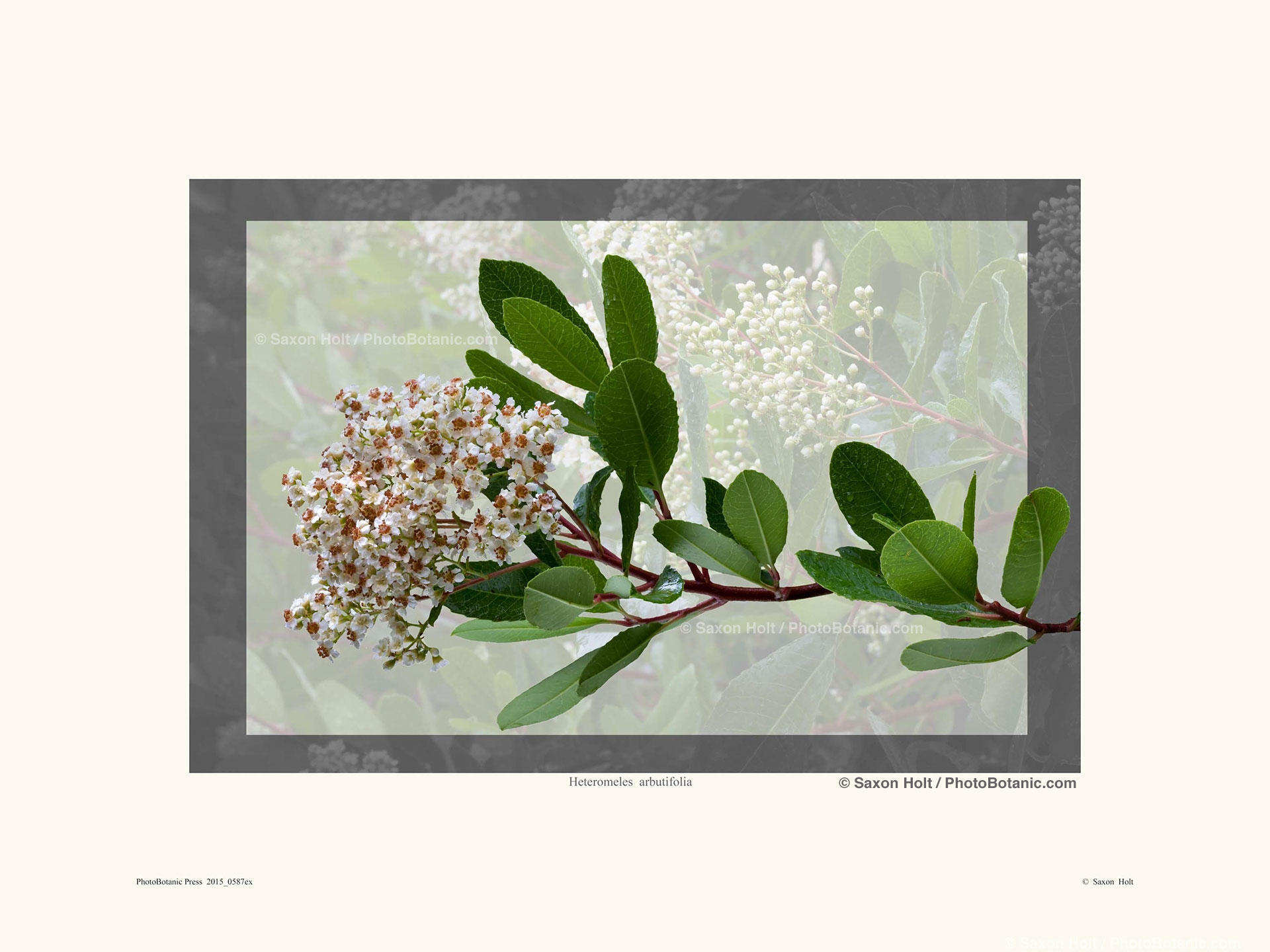 The original signed giclée print is a limited edition of 5; notecards and reproductions, unsigned, can be found in my store at Fine Art America.