4.0 Intro - The Camera and Computer
Underground in New Mexico 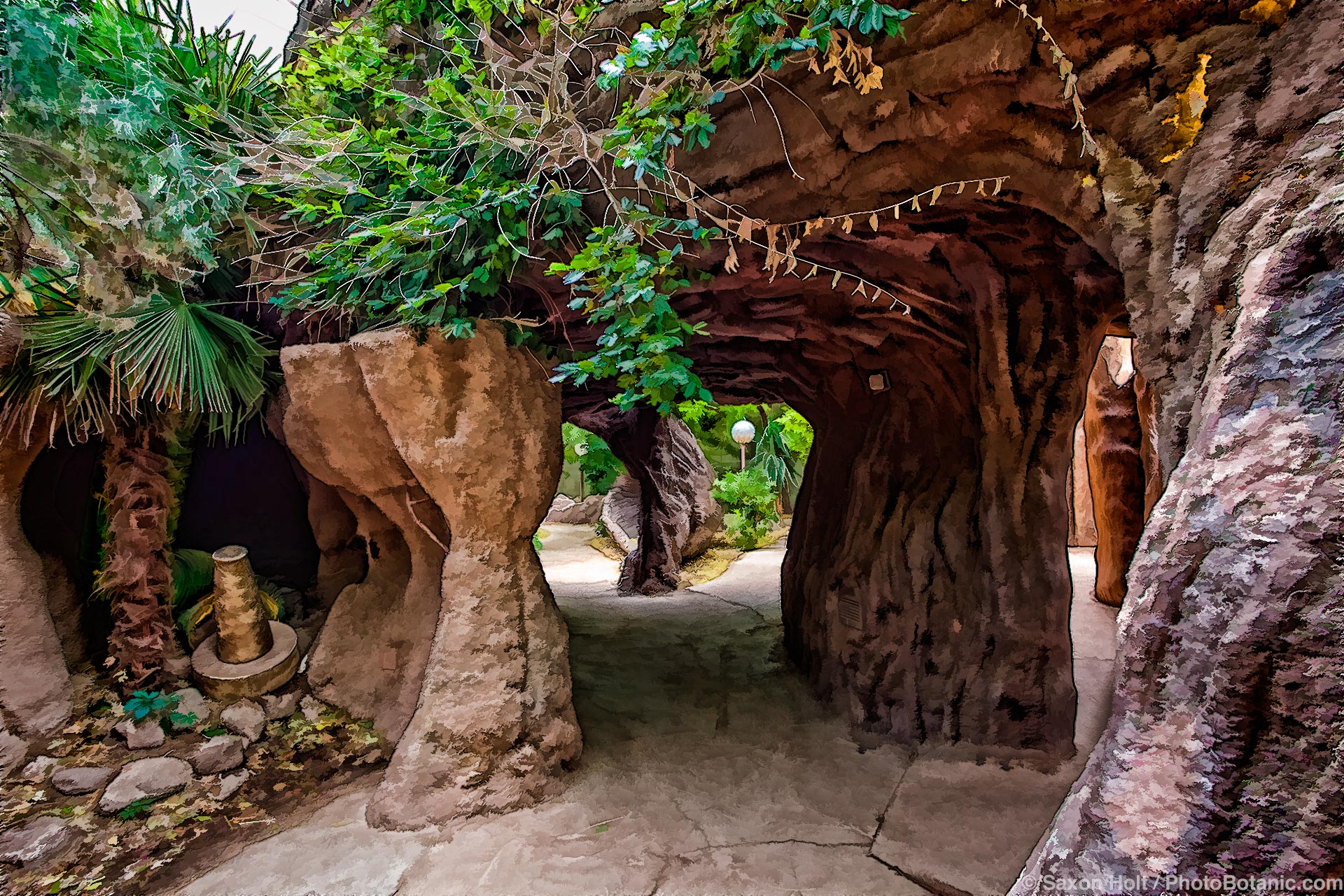 The Gopher Holes – Saxon in Wonderland

The Rio Grande Botanic Garden in Albuquerque, New Mexico has a most clever Children’s Garden.  Short of actually being in a garden, where kids can plant (play in the dirt) and harvest their own snacks, this place is sure to get kids excited about gardening.

A series of underground tunnels, resembling gopher holes intertwine in a wonderfully complex maze.  Fun to explore – hard to photograph.  It’s a good thing I always use a tripod. Before I get into the special techniques need to make the opening shot, lets look at the garden.

It’s a big garden, an oasis in the desert with many access points to learning.  Here is a map showing the various Sections. I am always on the lookout for public gardens that help local gardeners know what works in the region and that showcase native plants.

I confess I knew nothing of the garden other than there were some expansive lawns for picnicking and was a bit surprised to see several sections of the garden that used native plants. Whenever I find a new native plant for gardens I am both bewildered that I did not know it and delighted to photograph it with hopes of encouraging gardeners to discover it too. The Wahootree ? 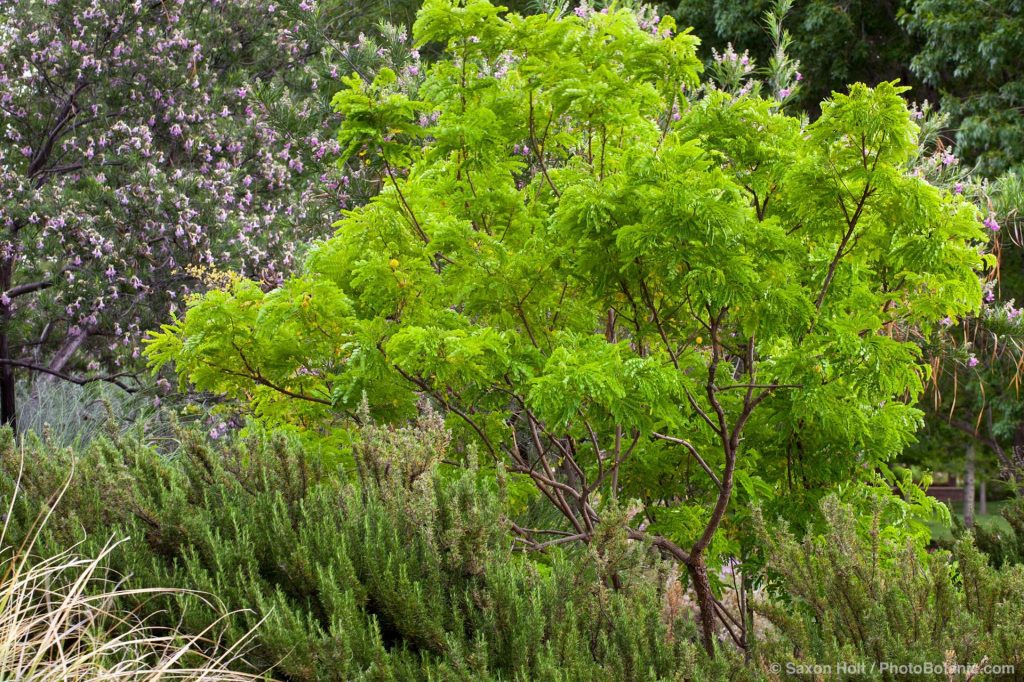 Leucaena retusa also known more commonly as a Goldenball lead tree is native to Texas and parts of New Mexico, and then when I found out it has a common name of Wahootree I was doubly delighted.  Graduates of U of VA are ‘fondly’ known as Wahoos.  Need I say more ?  Oh yeah, small tree for dry hot sites; and lovely with its bright green pea-like foliage. Wonderful Achillea was covering the Xeric garden, a meadow in all its glory.  Note to self:  add this to the next edition of The American Meadow Garden. 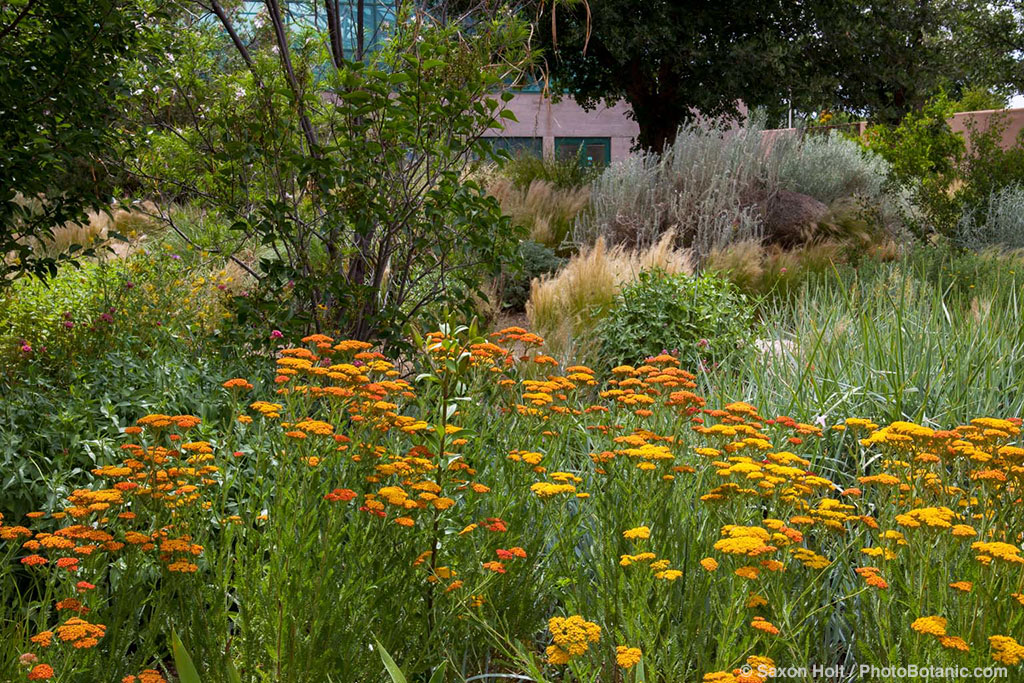 But most unexpectedly, I almost literally stumbled into the Children’s Fantasy Garden. 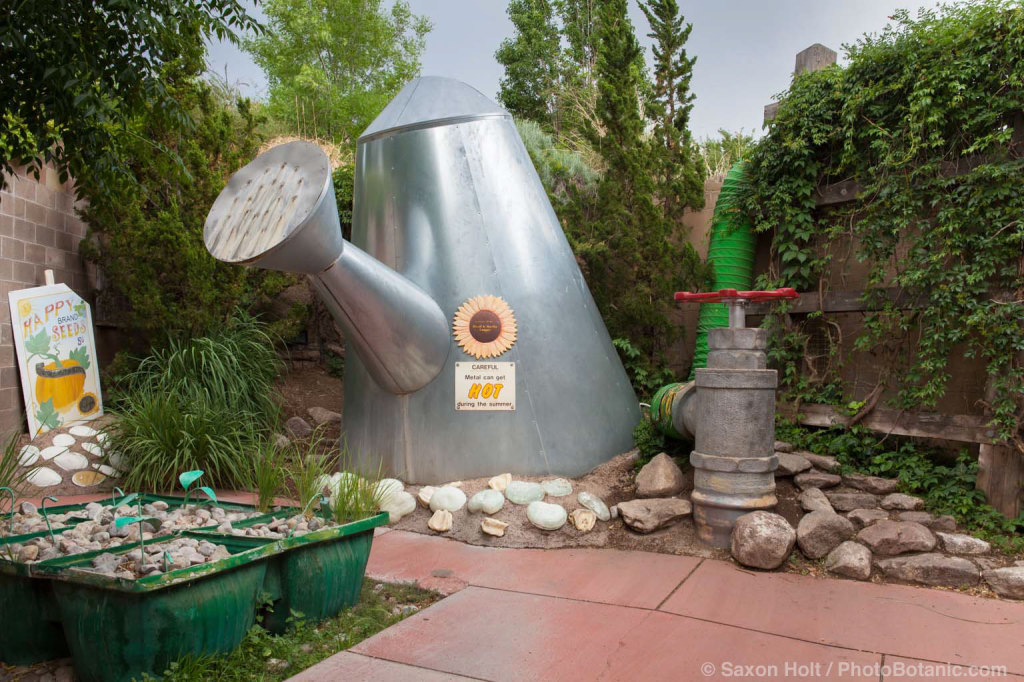 I felt like I had fallen down the rabbit hole.  Everything was out of scale. As I walked past an oversized flower pot and under a huge flower “growing” out of it, I noticed a bee working on pollination. A hidden speaker suddenly erupted, and was startled by intense buzzing . What fun!  As a parent I worried that little ones would by now be crying.  As a big kid I was grinning ear to ear. I went through the maze and truly got lost, making many wrong turns, finally entering a series of tunnels – gopher holes. 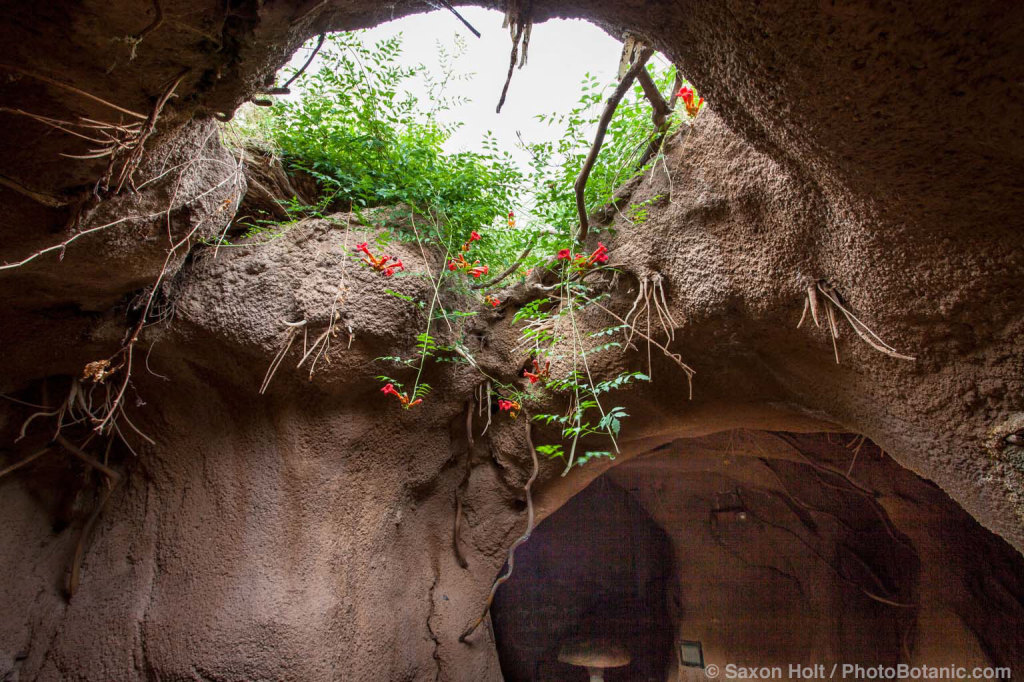 Light came through a series of holes open to the sky as if I were a gopher looking up. While I delighted in being underground in New Mexico, taking photos was a huge challenge.  It’s dark in those tunnels; and the sky is bright. A great time to use a Photoshop technique of merging different exposures, expanding the dynamic range of the camera sensor.  Many cameras now have built-in HDR (high dynamic range) settings that will automatically use multiple settings. I do HDR merge in the computer during post production where a single tool in Bridge will merge the frames I select.  The key to making it work is to use a tripod for tack sharp (and unchanging) focus and thus NO change in composition when the multiple images merge; and being sure to adjust the exposures by means of shutter speed, not the aperture setting which subtly changes focal depth of field. 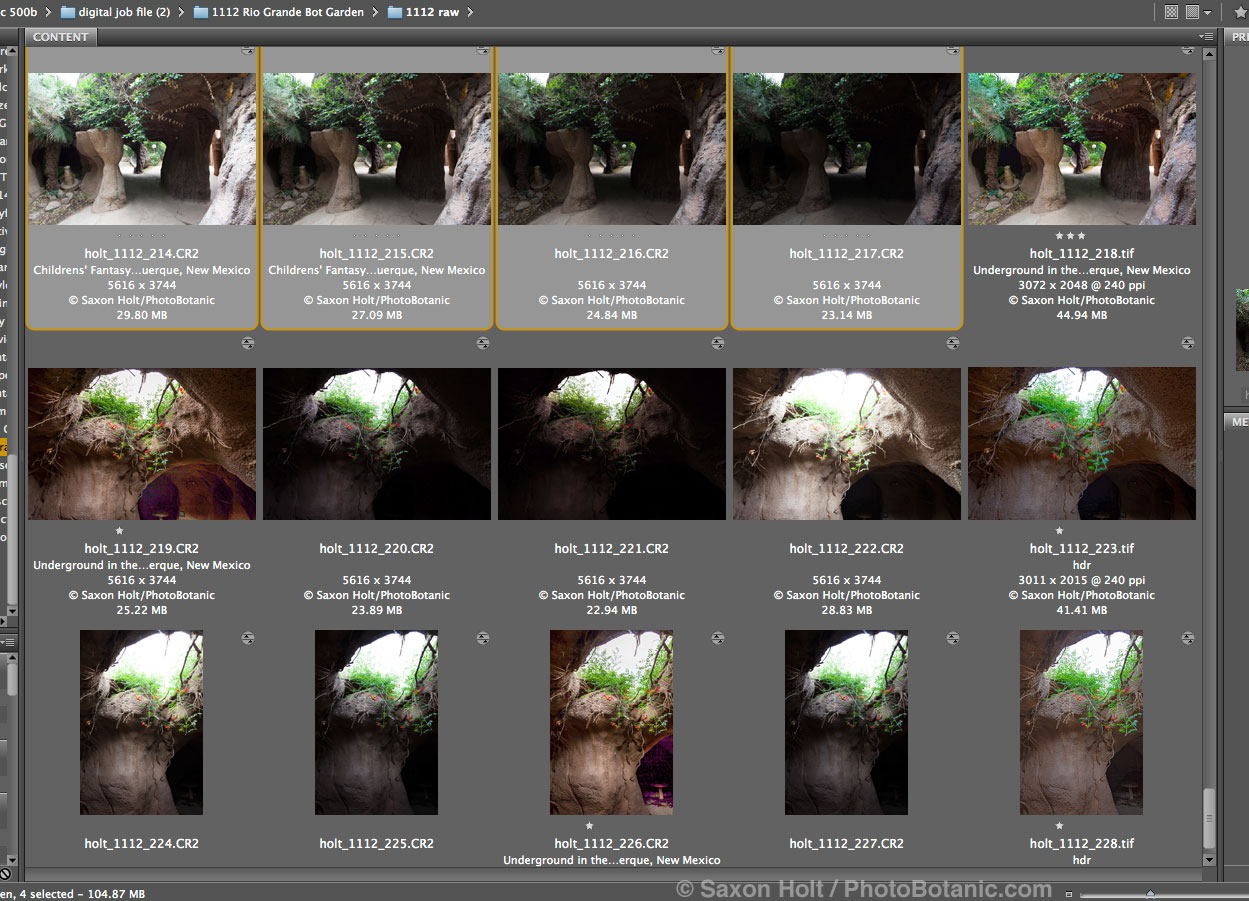 Often these merged images initially look ghostly and flat but that is easily corrected with other tools. 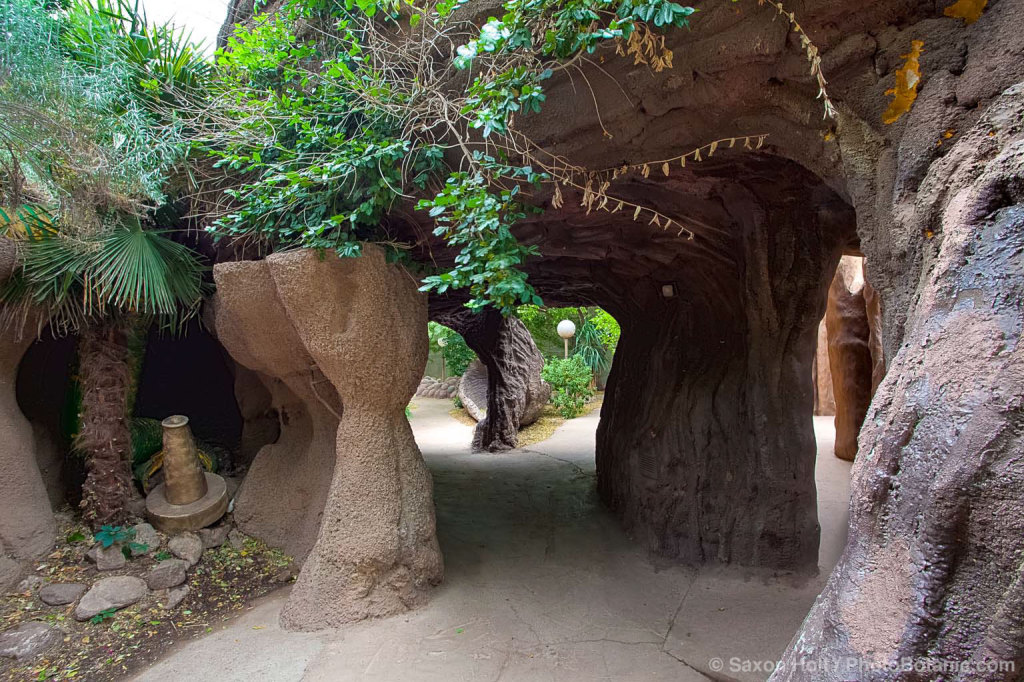 In this case I still wanted to enhance the scene, create a little fantasy and went back into Photoshop pulled out my Topaz Simplify plug-in filter, and began to play. 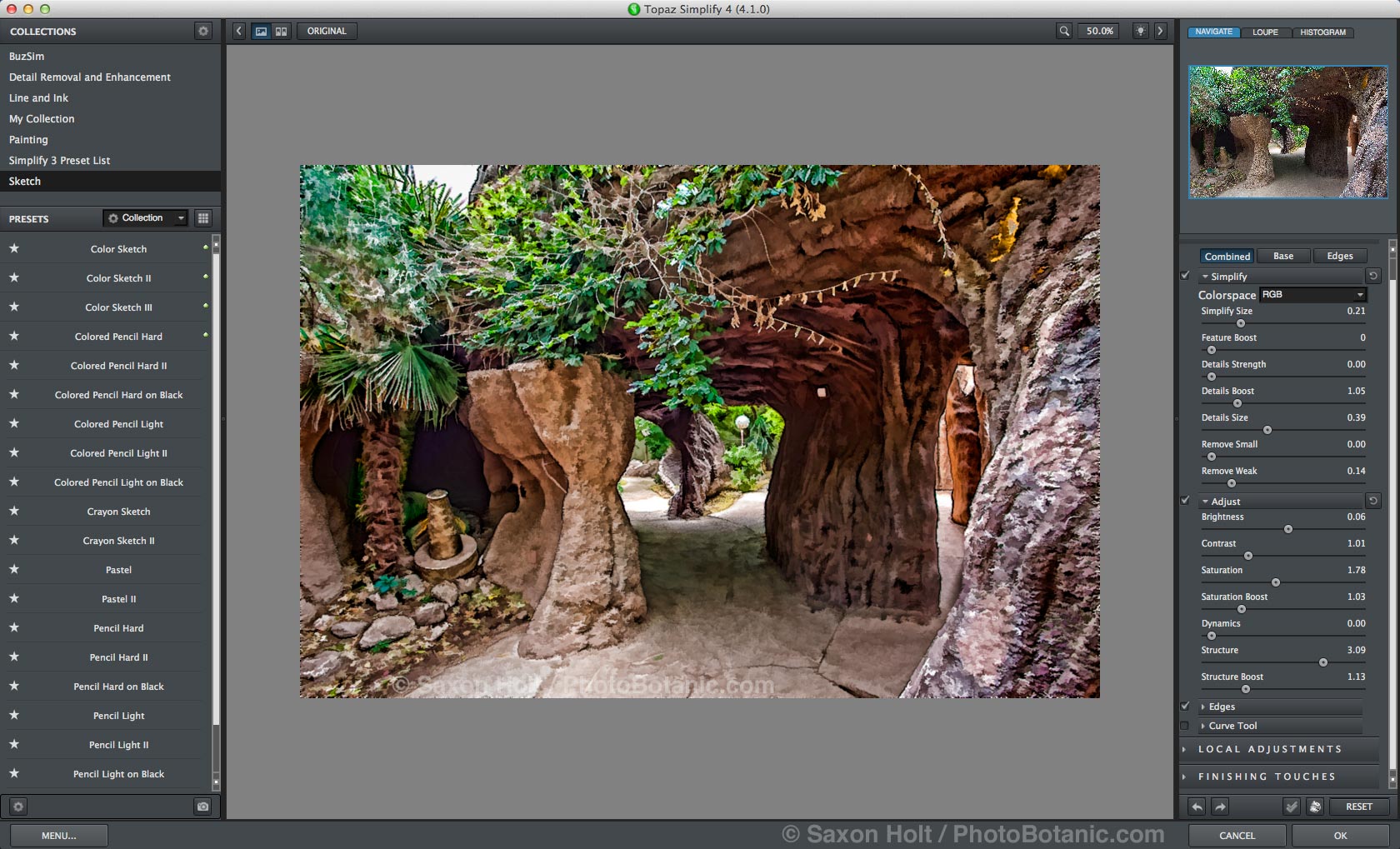 I love these filters and all the various settings that allow each photographer to create artistic effects, fine tuning to their exact needs.  I was looking to get the effect of an illustrated book.  I was in Wonderland after all. 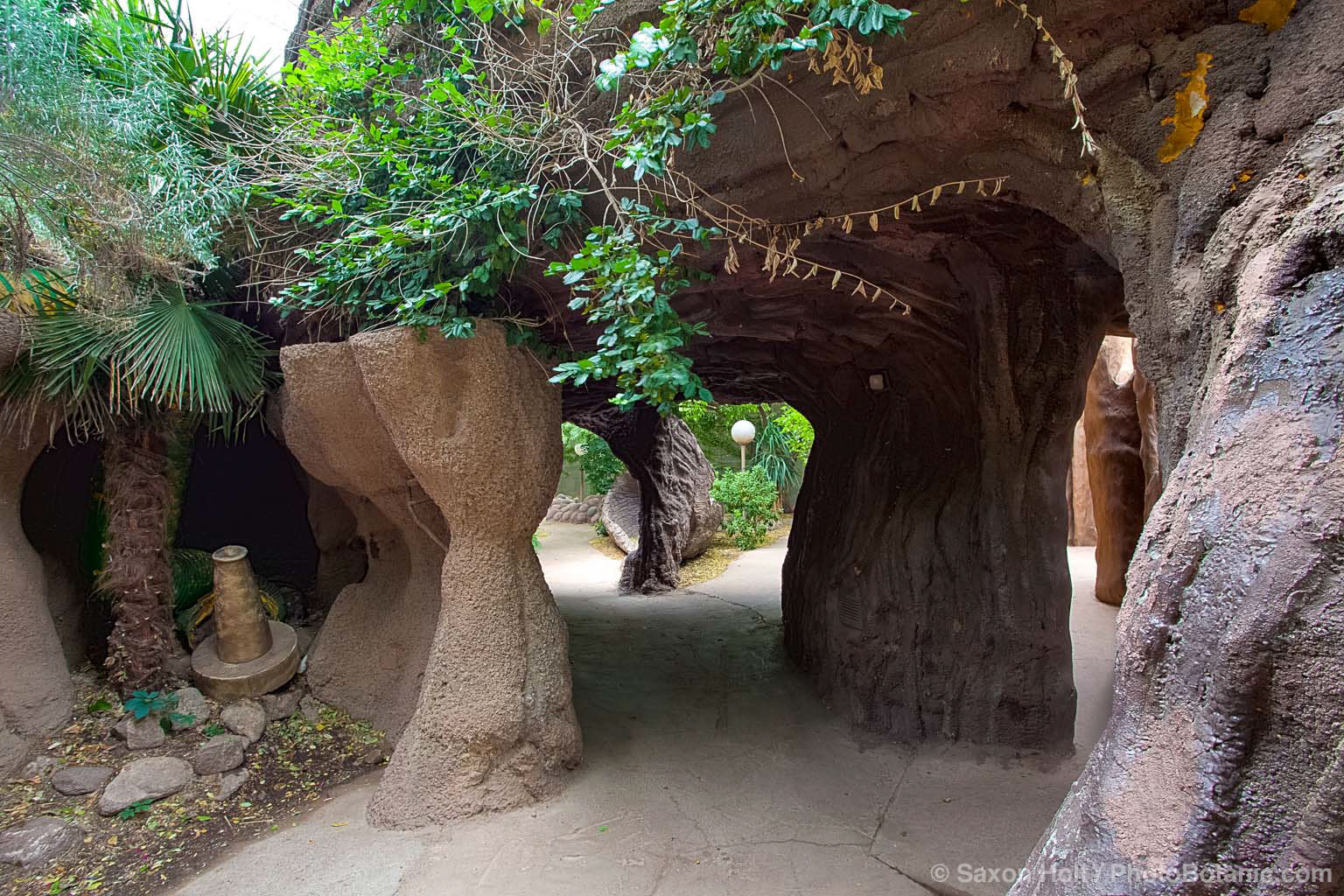 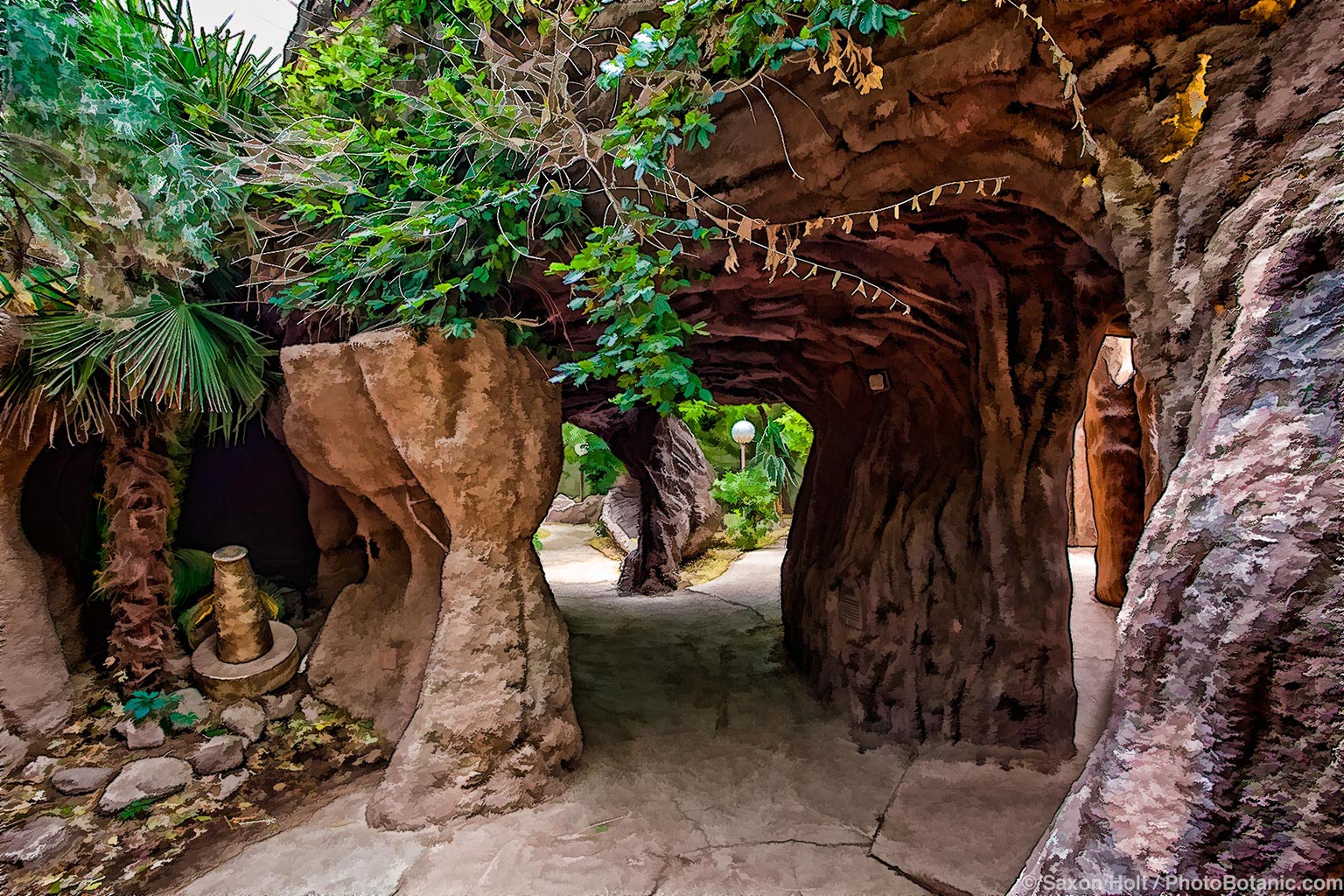