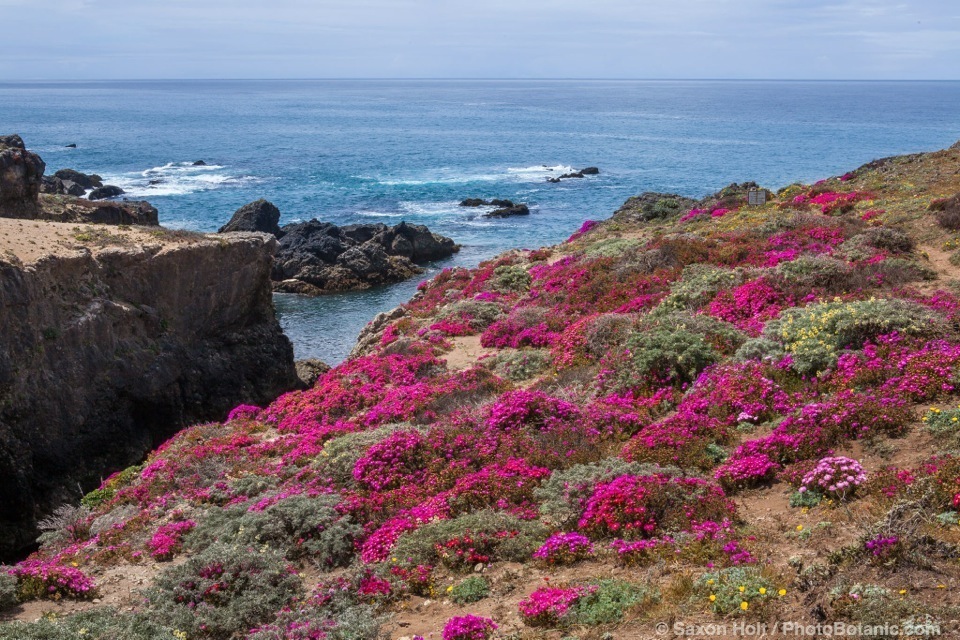 Yet, despite the hundreds of homes built and thousands of lots, The Sea Ranch has preserved the natural integrity of the land and views of the ocean.

The bluffs, meadows, and forests are preserved due to farsighted local developers who loved the land and brought in a master landscape architect, Lawrence Halprin, who wrote:

“At The Sea Ranch we have developed a community based in wild nature and sustained by its beauty. We have an important responsibility here. What do we bring to this environment and how do we alter it? I feel myself a custodian rather than an owner of it. . . . I feel I owe constant vigilance and care for its poetic and spiritual survival. I hope those who follow me feel the same” – The Sea Ranch . . . Diary of an Idea.

Only California native plants are allowed to be planted on any visible landscaping at The Sea Ranch, and even within the very limited, very small fenced garden areas, no non-native may be taller than the fence.

The character of the land has been preserved.  The original Monterey Cypress hedgerows that protected the original ranches became the landscaping motif for developing clusters of houses around open meadow areas of the California Coastal Terrace.

Lawrence Halprin: “I realized then that it was this character that I hoped we might achieve at Sea Ranch, a feeling of overall place, a feeling of a community, in which the whole was more important and more dominant than its parts. If we could achieve that – if the whole could link buildings and nature into an organized whole rather than just a group of pretty houses – then we could feel we had created some- thing worthwhile which did not destroy, but rather enhanced the natural beauty we had been given.” (The Sea Ranch Covenants).

As part of the development, public access has been preserved at designated trails and especially at the Sea Ranch Lodge, with its historic old ranch buildings, where paths through meadows to ocean vistas are part of the commitment to share the natural landscape that The Sea Ranch celebrates.  As such, one would think it would be a showplace of native ecology, a place visitors from all over the world can see firsthand the stunning interface between the ocean and the land, and see how native plants define the habitat.

Instead, it is one of the most disturbed plant ecosystems on the coast, covered with non-native and invasive plants.  It is being loved to death, for where ever humans go, weeds will follow. The most used trails at Bihler Point, in the expansive Coastal Terrace meadow, below the Sea Ranch Lodge, is a textbook example of a disturbed ecosystem, covered with non native grasses, mustards, and thistles; and now, especially at Black Point, encroaching iceplants.

Despite the good intentions of the Comprehensive Environmental Plan, saying the “challenge was to demonstrate that people can inhabit a beautiful and fragile land located along a wild stretch of the California coast without destroying it”, the native plants are being overwhelmed by invasives.

It is particularly sad to see the ice plants overwhelming the natives, not just because “iceplant is a succulent, it takes and stores water and nutrients from the soil, making survival much more difficult for native plants.” (California State Parks Bulletin), but visitors think they are a natural part of the California Ocean Bluff ecosystem.  Every happy tourist I encountered hiking the bluffs on recent visit was surprised to find out the bright colorful flowers were not native.

Whenever possible I directed wildflowers lovers to a wonderful, nearly intact community of native plants at the peak of flowering atop a bluff overlooking a cove on a different part of Black Point. 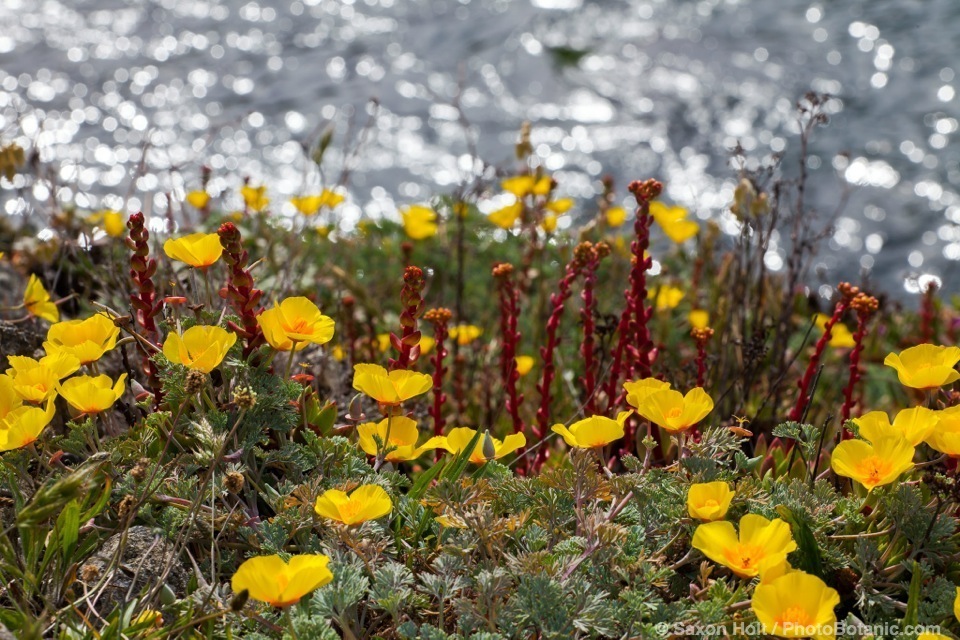 This succulent, Dudleya farinosa, known as Bluff lettuce, or Powdery Liveforever, clings to rocky outcroppings all along the coast, but here it must outcompete the invasive succulents, two varieties of Carpobrotus, both C. edulis (not flowering) and C.chilensis (flowering)

“Within those coastal areas, it’s a very serious problem,” said botanist Peter Connors, reserve manager at the UC Davis Bodega Marine Laboratory. “It sends runners out over the surface and it will cover over all the surrounding grassland, and exclude everything else. It’s almost a total loss of whatever plant community was there in the first place.”

The masses of bright flowers have their own beauty until one realizes they are choking out the natives, changing what the casual visitor thinks the California Coast is supposed to look like.

“Iceplant increases soil salt content and blocks light for other species. Salts released by iceplant favor salt-tolerant species (like itself) while inhibiting grasses. This decreases the density and cover of annuals. The plant decomposes slowly, leaving biomass in place for several years.” PlantRight

Most of the ice plant invasion is currently contained to parts of Black Point, out of sight from the Lodge, but the Coastal Terrace at Bihler Point right in front of the Lodge is so disturbed it can hardly be called natural.  The massive carpet Rattlesnake grass (Briza maxima) is so prevalent it seems beautiful.

In one area mustards dominate.

Ugly Italian thistles snarl the habitat and the views.

Bringing attention to this issue begins the process of restoring the habitat.

The Planning Committee developed a Comprehensive Environmental Plan, a Sense of Place that states: “This land, with its breathtaking vistas and rich biotic communities, both delights the eye and restores the spirit. It has been from the beginning, and continues to be to this day, a cornerstone of The Sea Ranch sense of place . . . The environment continues to be restored and nurtured . . . The Sea Ranch designers prioritized restoration of the natural setting at the onset of their project”

Restoration and nurturing can begin with a modest management of the annual weeds by simply cutting them before the seeds mature, giving the natives a chance to restore themselves. A more aggressive restoration, that might become a model for visitors to learn about California native ecosystems would require establishment of native perennial grasses and sedges, and pulling out the ice plant by hand.

Our natives are prettier than the aliens anyway.  The Sea Ranch has the opportunity to showcase local endemics such as this yellow, coastal version of our native poppy, Eschscholzia californica.

The spectacular scenery of the Coast draws visitors from all over the world, delighting in the native world.  Let’s give them an authentic version of our ecosystem.

Cactus Point of View at Superbloom