How to Win a Photo Contest - Fill the Frame
Next

Geranium aficianados will be happy to know that Robin Parer’s book on Geraniums is done and about to be delivered to the publisher, Timber Press.  I got to shoot some final mug shots at her backyard nursery in Kensington, California using the black background style she and photographer Donn Reiners created. 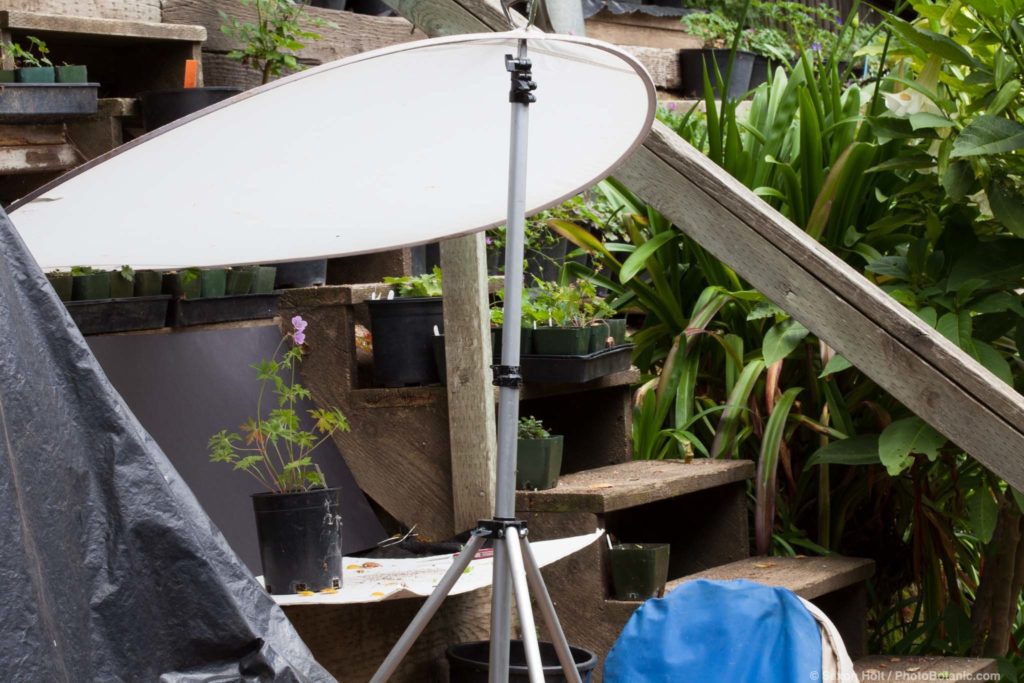 I don’t know how Donn began photographing the series but I used a simple jet black matte board, put her nursery stock on a white foam core to reflect light, and used a simple overhead scrim to soften the light.  Shooting macro photos is frought with difficulties – in particular wind and depth of field.  It can be quite a challenge to get a sharp image through out the frame when shooting out doors.

Fortunately it was a fairly calm day, and I shot lots of exactly the same image to be sure I got one that would be tack sharp.  There are some wonderful macro photos that focus on one small edge and create a dreamy abstract image, but these photos needed to resemble a botanic illustration – my favored style – a PhotoBotanic illustration.

Knowing the photos would be fairly small mug shots in the book gave me leeway to crop the final image, so I was able to back off from a super tight composition planning to crop tight later.  Even so, several of the geraniums were not sharp front to back.  In those cases I planned to use a focus stack technique which sandwiches multiple images that are focused on different areas.

After I merged this image (from 4 separate files) then cropped it, I still had to manipulate the background – which was never actually black.  After exposing the camera meter for the flower, the background became dark gray.  Here too, the post production computer work allowed me to create an adjustment layer in the image file so the background could go black.

Then finally, for my personal pleasure, after I saved the files for the book, I went a step farther and added a bit of a filter affect to give a painterly affect.  Subtle unless you look for it, but now it is no longer a mug shot but a PhotoBotanic illustration.  What fun.