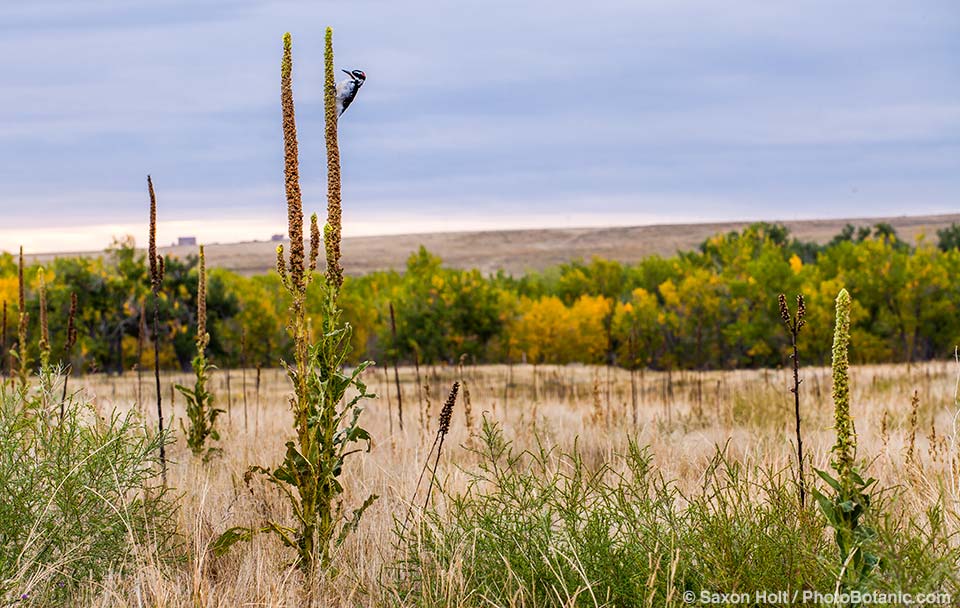 There is something about prairies that makes them particularly hard to photograph. 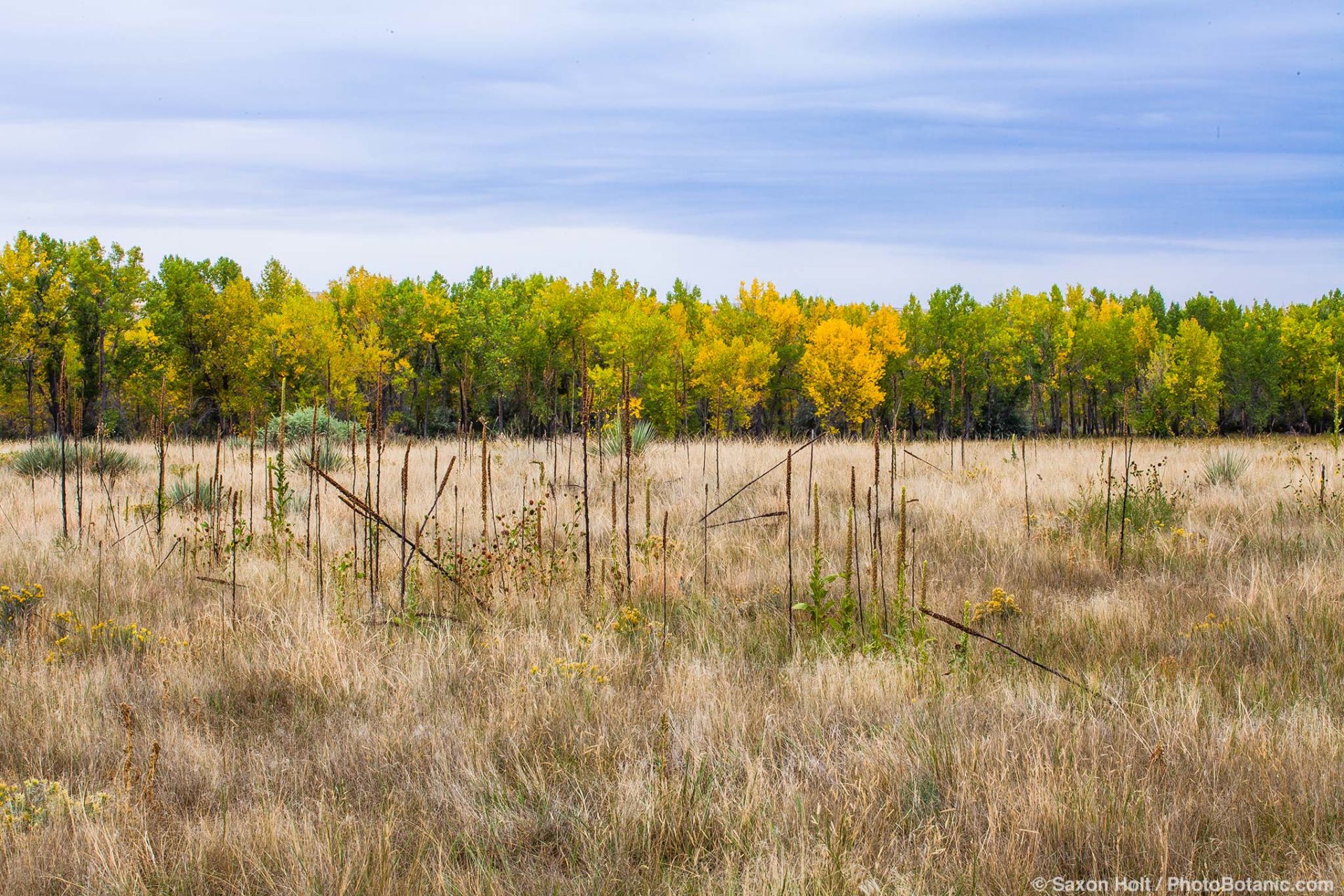 They are, in fact, panoramas, sweeping vistas that need to be framed in wide horizontals. That is a problem for a photographer on several levels.  For one, when you look through the viewfinder you’re given a fairly typical rectangular canvas to compose the photograph.  It is hard to “see” a panorama within the frame.

And then there is the nature of the wide angle lens: it will distort, reorient, or curve any straight line it sees. You really don’t want to have that horizon line to have any curve.  The composition will be a lot cleaner if the horizon line is exactly parallel to the top and bottom of the frame.

However, when you are making a panorama you should be pre-visualizing the final composition, the one that you will crop later, when the horizon will not be dividing the scene in exact halves. But for the initial capture, do put the horizon line dead center. In the center of the lens the horizon line has no curve.  For this I am assuming you’re using a wide angle lens.  Telephoto lenses do not have the distortion problem, but it is unlikely you will be trying to capture a vast landscape with a telephoto lens.

Prairies are surely vast landscapes, and I put these lessons to good use during my visit to the short grass prairies of Colorado. My visit to the West Bijou Ranch, a working ranch east of Denver that is managed by the Savory Institute gave me a great insight on grazed prairies. Using holistic rangeland management practices the Prairie was beautiful even on overcast autumn days.

The morning I visited I was nearly overcome with a different kind of beauty, enveloped in birdsong like I had never heard. I could hardly work with the camera, I just wanted to imagine heaven.

Much of prairie beauty is felt in bigness of it; the utter, expansive quiet filled with only birdsong, and the in-your-bones connection to the big planet underneath your feet. And I had it all to myself, with only the ranch manager, who was never closer than half a mile away. I delighted in the solitude of the prairie but made few photos.

Mostly I made panoramas.  I did not get the early morning dawn sweeping dawn light I had hoped for, but was greeted with rain clouds.  For the panorama below I knew I wanted to feature the sky and have it dominate the upper two thirds of the final composition, but nevertheless, to start I put the horizon line in the center to keep it straight. 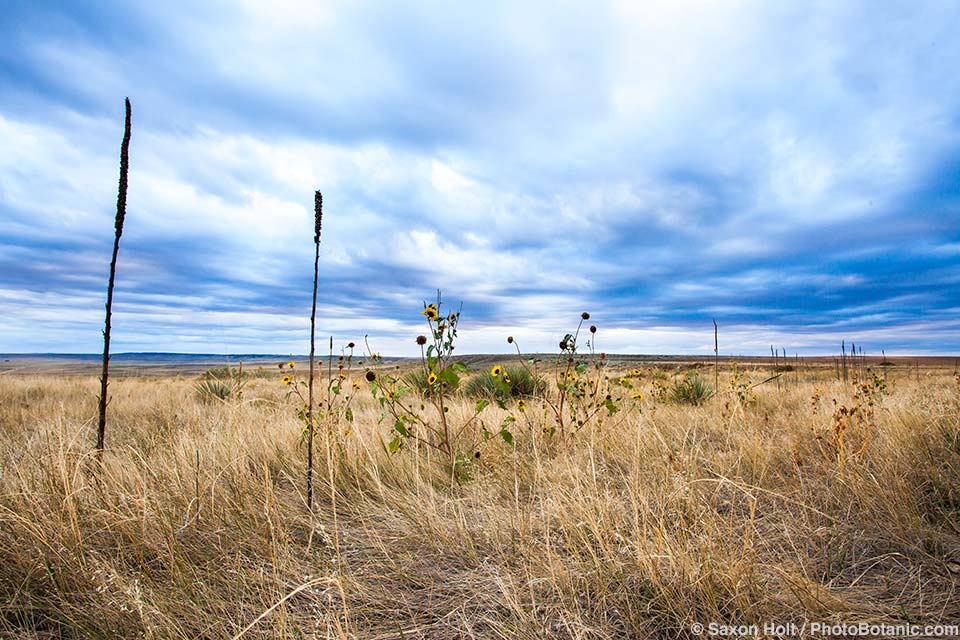 Then when I got into my postproduction work I could crop it to the strong horizontal.  Note I was able to find the vertical lines of those mullein seed stalks to tie the sky and land together.

Running through the ranch is Bijou Creek from which the Ranch takes its names. The creek creates a riparian corridor which is dominated by cottonwoods that were just beginning to color up for the fall.

Imagine the panorama in this next photograph, and consider what the ultimate cropping might be.

The trees give an extra shape to consider, the clouds are not nearly as interesting as the previous photograph, and note there are a lot more stalks of mullein.  See the cropping?

I will crop underneath right to where the vertical lines begin, and I’ll crop down nearly to the top of the trees so that they dominate the upper space of the final composition.

Somehow that framing feels right.  There are no exact proportions for panoramas.  I used to try to make them all three times wider than tall, but now I just go by feel.

And I try to put myself into landscapes that make me feel expansive.

More photos the the West Bijou Ranch are in this new gallery.