I found an old friend in Sacramento’s Old City Cemetery this spring.  I visited the cemetery to help the local Rose Society preserve the historic rose collection found there.  The roses form a collection of found roses from old homesteads and cemeteries dating back to Gold Rush times. 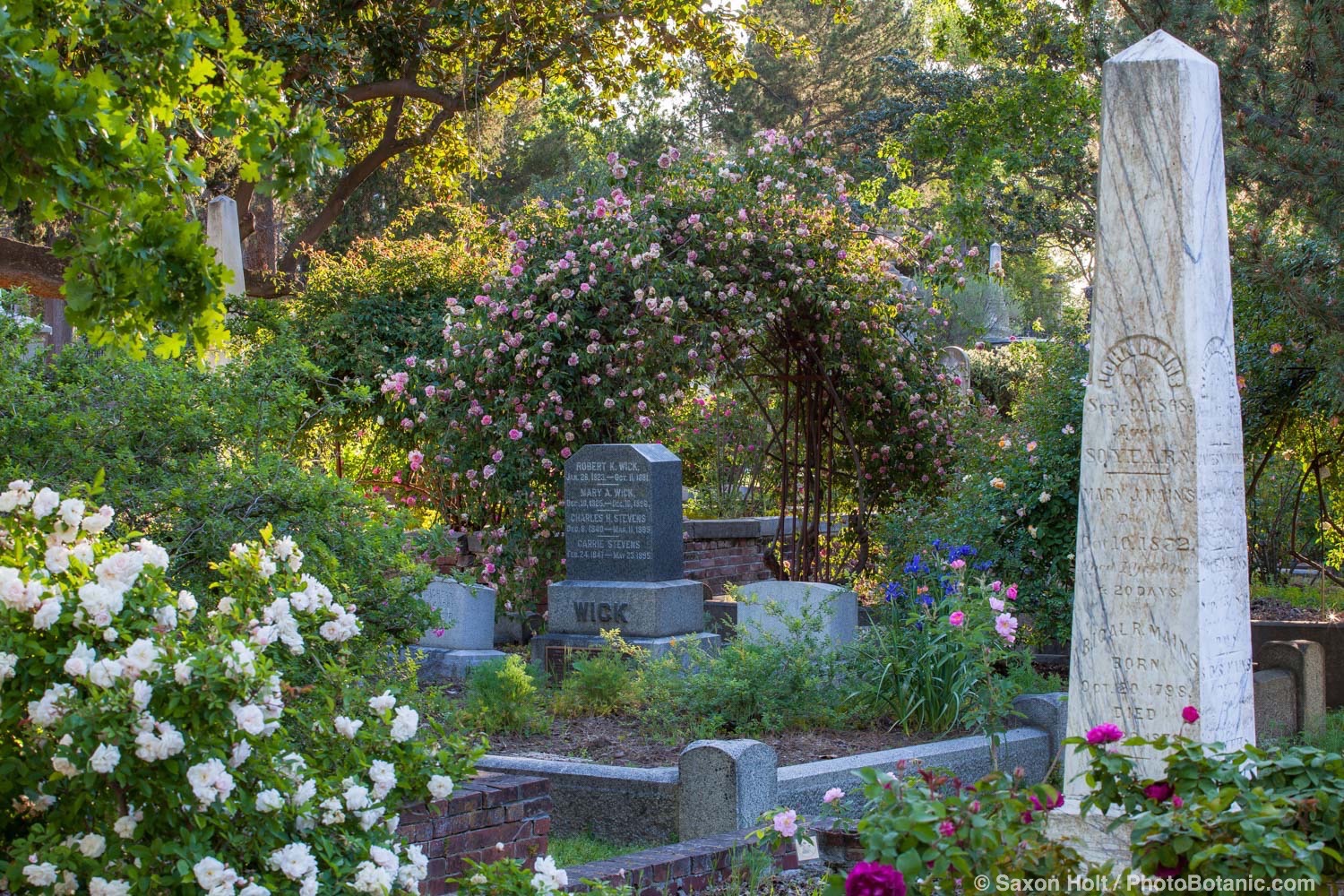 Roses were often planted in cemeteries of pioneering families as they migrated across the country, making cemeteries a source of many roses now lost to cultivation, because hybrid roses began to dominate commerce by late in the the 19th century.

Interestingly, even old hybrid tea roses that were bypassed by later introductions are found in the cemetery, such as ‘Mme Caroline Testout’ – dating from 1890. 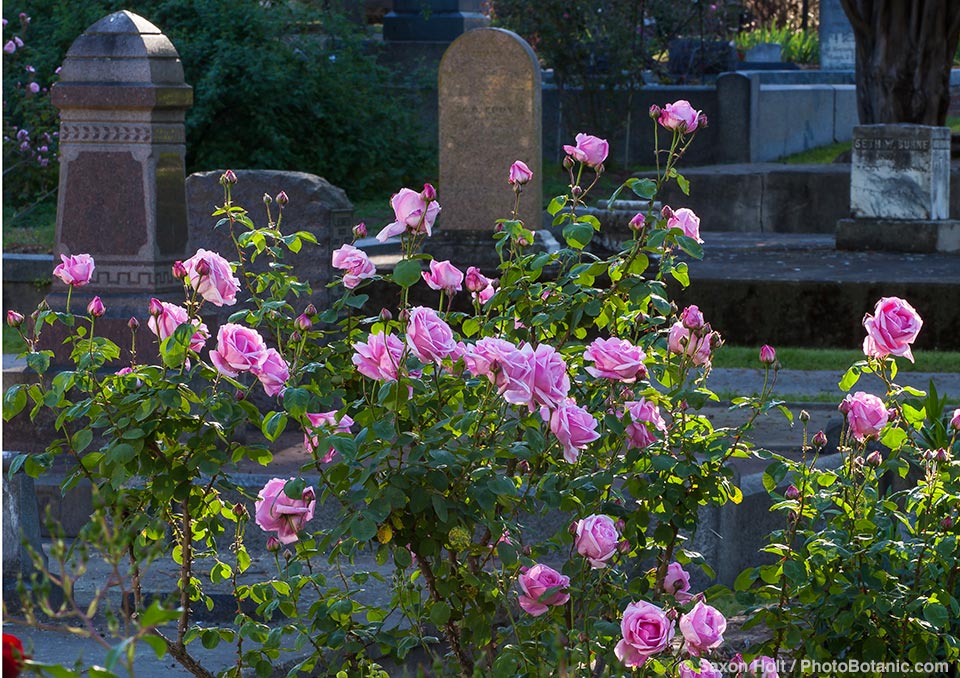 In Sacramento, the Cemetery Rose group coordinates the work of preserving California rose history and keeps up the rose garden at Old City Cemetery.  I wrote a blog post for Gardening Gone Wild in support of those efforts, and have spent today in conversation with Anita Clevenger, who is spearheading the preservation efforts and identified the roses for me. 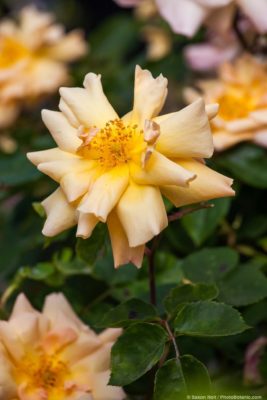 I was delighted to hear stories about the names of the roses, such as ‘Car Wash’, rescued, yes, near an actual car wash that was about to be demolished for a new development.

Not all the roses are so obscure and some are planted in the garden as important roses from California’s gardening history, such as ‘Fortune’s Double Yellow’ also know as ‘Gold of Ophir’ which seems appropriate to me, given all the gold mines once found in the Mother Lode.

When the Scottish plant hunter, Robert Fortune, discovered the rose in a garden in China 1845 he explained:

“On entering one of the gardens on a fine morning in May, I was struck by a mass of yellow flowers which completely covered a distant part of the wall; the colour was not a common yellow, but had something of a buff in it, which gave the flower a striking and uncommon appearance. I immediately ran up to the place, and to my surprise and delight found that I had discovered a most beautiful new yellow climbing rose.”

‘Fortune’s Double Yellow’ didn’t do well in England but was popular all through California, even naturalizing in some areas of Southern California. 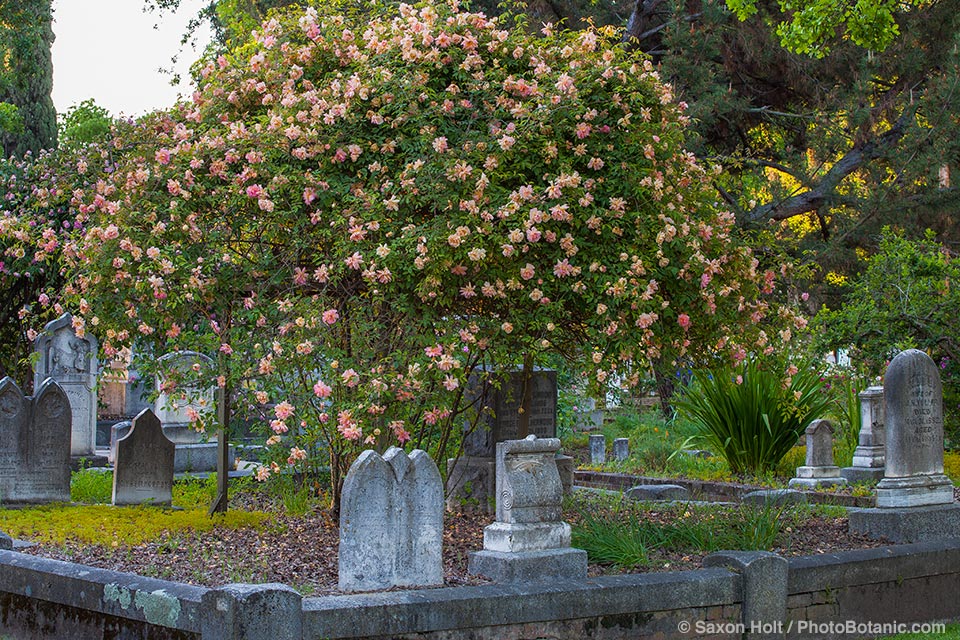 It is still found in unexpected and out of the way places in California, and is and unmistakable showstopper when it blooms.  I know because I have done u-turns when driving down back roads. 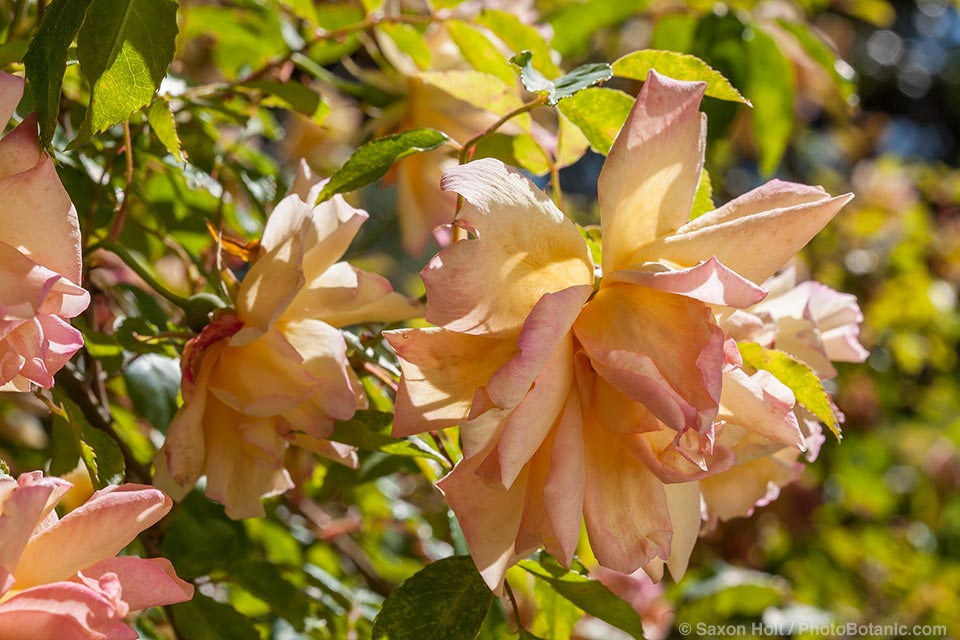 Some the original names of the roses found in the cemetery are lost and are named for where they were found such as the ‘Car Wash’ Rose above, or ‘Ferndale Red China’ which came from the cemetery in, yes,  the town of Ferndale. 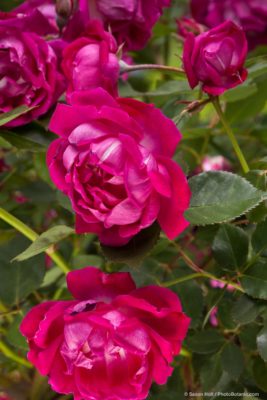 And then there are roses named after the folks who found them such as Florence Bowers from South Carolina, who saved this rose in her garden and gave it to friends.  ‘Florence Bower’s Pink Tea’ eventually found its way to California. 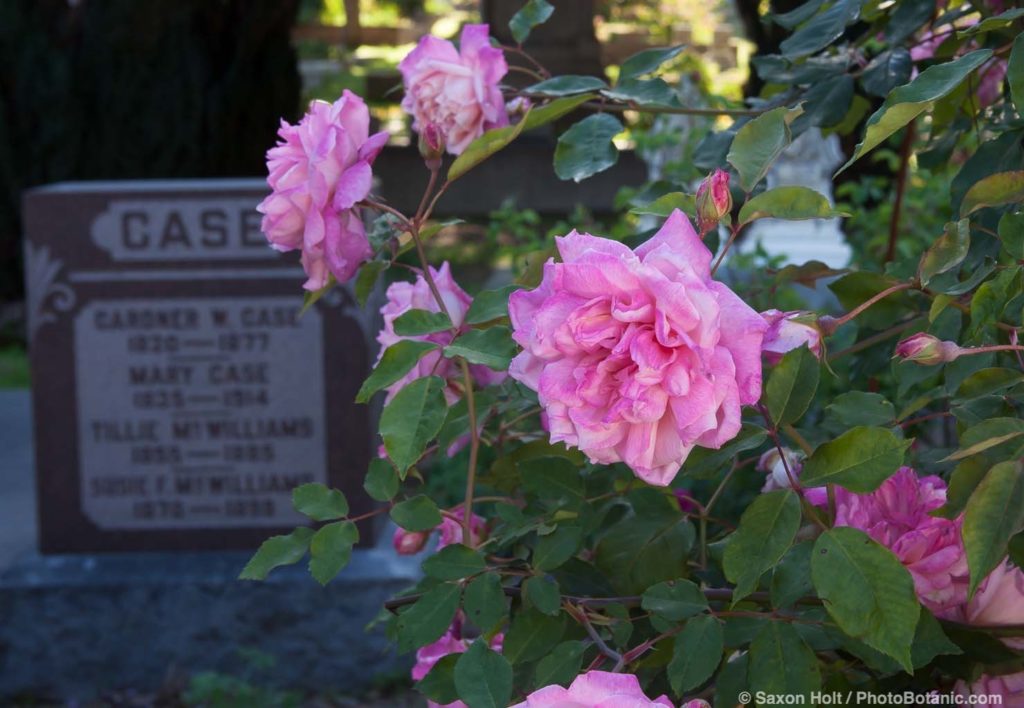 Which brings me to finding my friend in the cemetery.  When I first became a garden photographer, Phil Edinger was one of those writers who was always generous with his knowledge and passionate about plants. I sure did not expect to see him in a cemetery.  Then, in the Sacramento Old City Cemetery I found ‘Phil Edinger’s Noisette’. 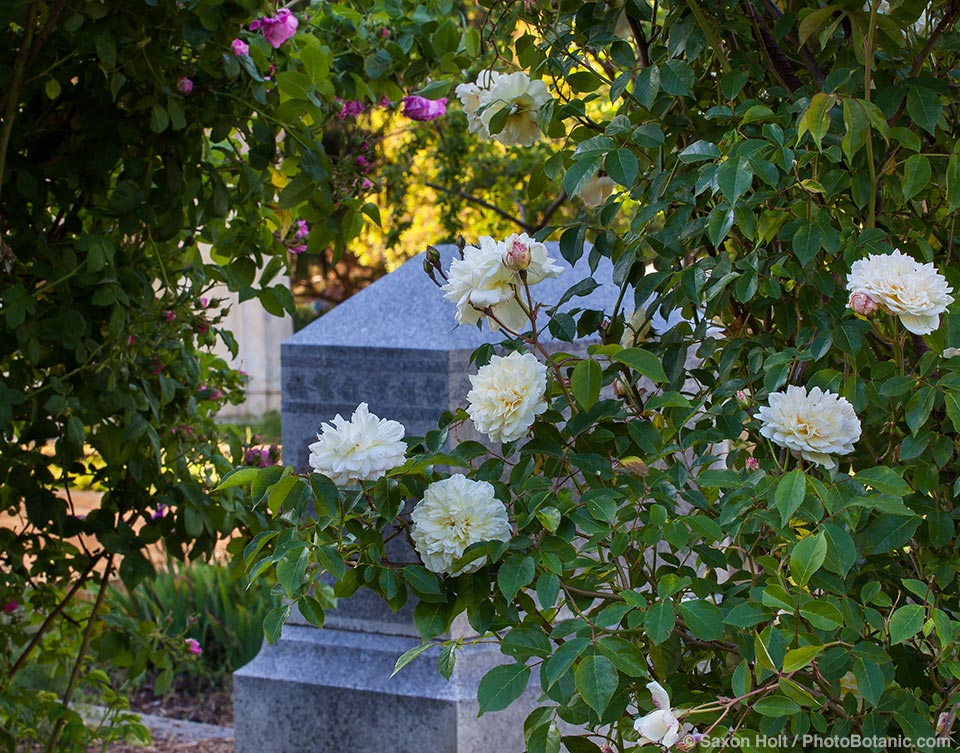 I did not know the name until today when Anita gave me all the identifications. I knew Phil liked old roses and last saw him in 1998 when I photographed the book “Heirloom Roses” with Rayford Reddell (still available on Amazon for, get this, $.01) but I always thought his expertise was iris. 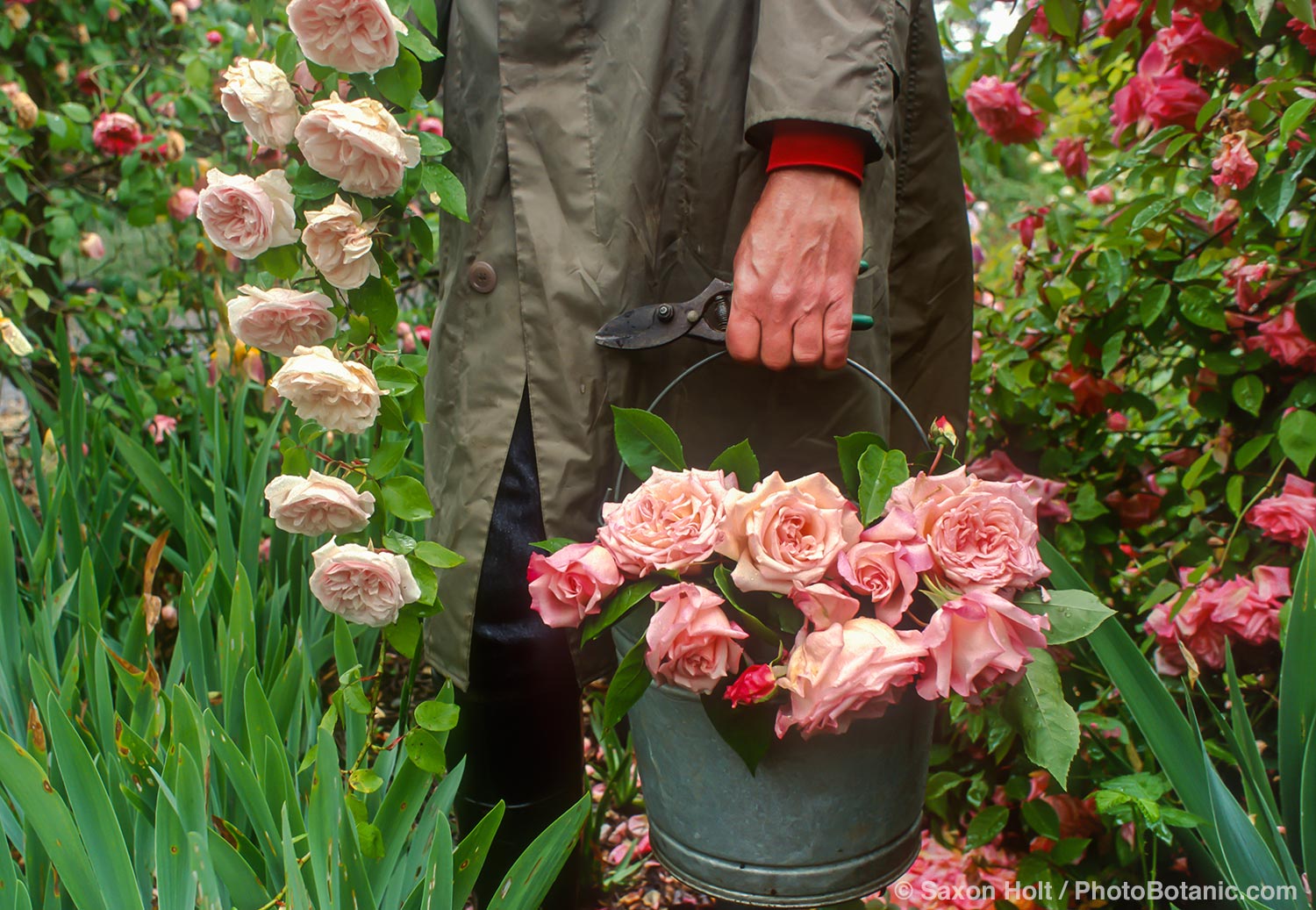 Phil Edinger with bucket of the old rose ‘Maman Cochet’

Have some fun exploring old cemeteries.  No telling what stories you will find.

The Heritage Rose Foundation is a great place to find more information about old, heirloom roses and many of the roses in the Sacramento Cemetery are for sale through the Heritage Rose Group catalog.

A new gallery of these roses is found in the PhotoBotanic Archive: Sacramento Cemetery Roses.