When The American Meadow Garden was published in 2009 I felt that John Greenlee and I were at the forefront of a new idea in gardening. Among gardeners who were concerned about the health of the planet, lawns were being reconsidered, meadows seemed such a logical evolution. 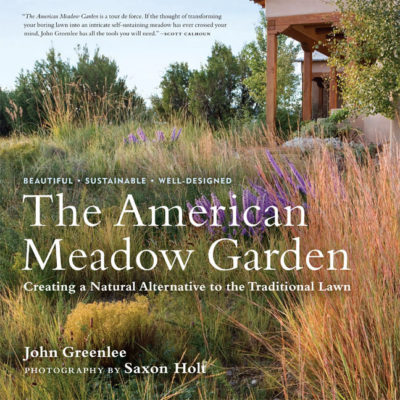 I wanted to find examples of garden meadows throughout the country and was disappointed not to find very much in the East Coast.  Only after the book came out did I meet Larry Weaner. Once I saw his work it became pretty clear I had not looked hard enough.

Now Larry has his own book, written with Thomas Christopher, which is just been released from Timber Press: “Garden Revolution – How are landscapes can be a source of environmental change.”

While meadows are prominent features of Weaner’s gardens, he takes a broader environmental approach, urging gardeners to understand the natural forces at work in the landscape that will make our gardens easier to implement and easier to sustain.

I made a point to meet Larry in his Pennsylvania office and begin to discover his passion for natural systems. While he does not even mention his home garden his new book, I love the simplicity of his backyard where he lets seedlings sprout and moss thrives in the shade as a perfectly adapted lawn substitute.

On a subsequent trip Larry introduced me to fantastic projects in Connecticut, so different from the West Coast, yet so clearly attuned to the natural systems.

One of the biggest tenets of Weaner’s designs is to prepare well and get out-of-the-way, to let nature maintain what happens. If the plant choices are well thought-out whatever happens will naturalize, so of course, he uses native plants.

On large projects, such as the one above, the “garden” becomes an homage to the native landscape and becomes almost indistinguishable from it. On smaller projects, simply replacing an old lawn with well chosen natives allows it to become a flowering meadow

While the principles are quite easy to comprehend, implementation is not nearly so easy as it sounds, so read the book. And you really should go see him speak whenever you have the chance.

Larry is now making several appearances in support of the book in conjunction with the Garden Conservancy. I am fortunate that one will be near me on the West Coast at the Heather Farms Garden Center in Walnut Creek on September 29.

There is another Conservancy event on the Washington DC in November 1 and he regularly lectures to garden groups in the East, as you can see on his active events calendar at Larry Weaner Landscape Associates.

If you are really lucky, as I was one day in Connecticut, you will get to tour a garden with students as Larry explains how a meadow system works firsthand.

He is an important voice guiding the future of sustainable garden design.  A Revolution ? His sort is most welcome.

Connecticut Meadow – Gallery of photos from a Larry Weaner garden in PhotoBotanic Archives.