Let’s go beyond the basics of photographing roses. In the Rose book I covered photographing roses in gardens, then the hero rose, macros, lighting and composition, and a fun chapter about bouquets. Now I would like to share three advanced techniques that go beyond basics.

Over the years I have been asked to illustrate roses for some very special projects and learned a few tricks that have allowed me to make beautiful prints.

I will show the botanic illustration technique I used when photographing the Smith & Hawken rose books with rosarian Claire Martin, a focus stacking technique to create incredible depth of field with close-up photography, and then show you the PhotoBotanic extraction process whereby the rose is illustrated within its garden setting.

The two rose books that I illustrated were completely influenced by the great botanic illustrator Pierre-Joseph Redouté. I pasted stickers of his work on my camera case for ready reference.

Illustrators have the luxury and creative license to make the roses look perfect, with flowers, buds, leaves, and stems all perfectly proportioned and balanced with in the frame. The photographer may have perfect roses to work with, and the plants may be perfectly healthy, but you can’t just lay down a branch and take its picture.

For the 100 photos shot for each book, each rose became an illustration. I created a makeshift studio out of a bright white painted piece of countertop that I carried between gardens from Los Angeles to Portland as the rose season progressed, working in the garages and living rooms adjacent to the rose gardens with my portable studio lights.

Perks of the job – days spent with perfect roses.

Each day of the shoot 8 to 12 roses were determined to be at their peak and enough were picked to be broken up and then reconstructed looking carefully through the camera viewfinder to make the illustrations.

Roses look to the sky not the viewer, and even the best branch on the best day will not have every one of its flowers, it’s buds, and leaves in perfect condition. So I had to piece together these roses, it occasionally took as many as 11 parts to assemble the photographs. Almost all of the roses themselves were clipped from their stem so that I could have them face the camera using little bits of clay underneath to prop them in place.

I tried to study the roses and study Redouté’s work to create realistic fabrications. If you look carefully at the plates in the book you will see how the roses were put together.

When we had to replace an imperfect leaf with a better one, I was sure to look for a node on the stem and put the fresh leaf in place so that it looks natural. It is interesting to note that the leaves were more likely to wilt then the flowers as I tried to work quickly once we put any particular rose under the lights.

It was a bit harrowing at times, trying to get the rose pieced together on the countertop, but it was even more fun, fussing over every bud and flower so that it looked natural and in proportion.

After so much effort was done to make the photographs resemble botanic illustrations, I was a bit disappointed that the format of the book was so narrow that most of the roses look cramped. So after the books were done, I selected a number of my favorites and printed them in their full glory as Giclée prints.

They are available as limited edition prints, in the PhotoBotanic Store.

This next project was to create a series of high-end dinnerware that honored vintage roses. The individual flowers had to be isolated for the designer to apply to the cups, saucers, and plates in differing proportions.

They were to be close-up studies and had to be tack sharp. This is practically impossible in normal macro photography, as I talked about in chapter 2.  Focus depth of field is very shallow when working at extreme close-ups.

However, the computer allows the photographer to merge multiple photographs, each focused slightly differently so that a final photograph can be composited as one very sharp image with maximum depth of field. This is a technique called focus stacking – each image is layered on top of each other and smashed together in the computer so that everything is sharp. 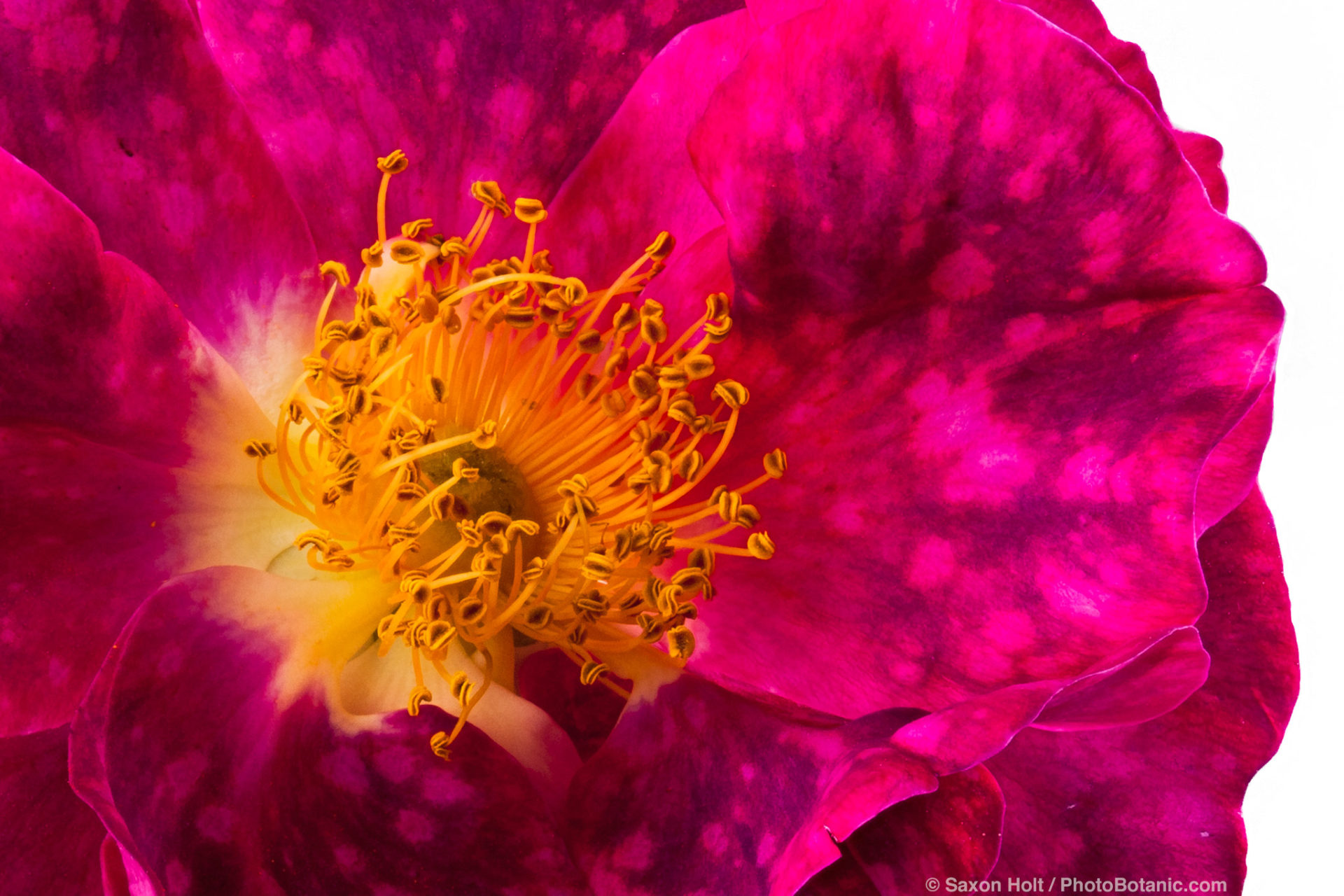 To do this I set up my studio in the garage, as I showed in chapter 3. There is no wind in the studio and by using strobe lights each image is crisp and razor-sharp.

I use a very basic setup with soft box lights on either side of the rose, which is set in a very simple vase. Then I set up the camera on a tripod right over top of the rose to make my exposures.  You must a have a camera with a macro lens that can be manually focused.  Be sure to turn off the auto focus control.

It’s critical that the rose and camera not move during the series of photographs since the entire sequence of photos must be stacked together.  Only the focus ring of the lens moves, about 2 millimeters at a time, as I gently re-focus and take the next photo, shooting from the top of the rose to the back of the furthest petal.

It does not make any difference to the computer whether you shoot top to bottom or bottom to top. In fact, I often shoot both to be sure I have a back-up set of images to work with, and a  complete series covering all the overlapping petal edges.  It can be a dizzying, eye-blurring exercise to follow the sharp focus points through the rose.  I always practice the focus sequence a few times before actually taking the photos.

Depending on the rose, I usually took 10 to 12 different  pictures, each at the same exposure setting. 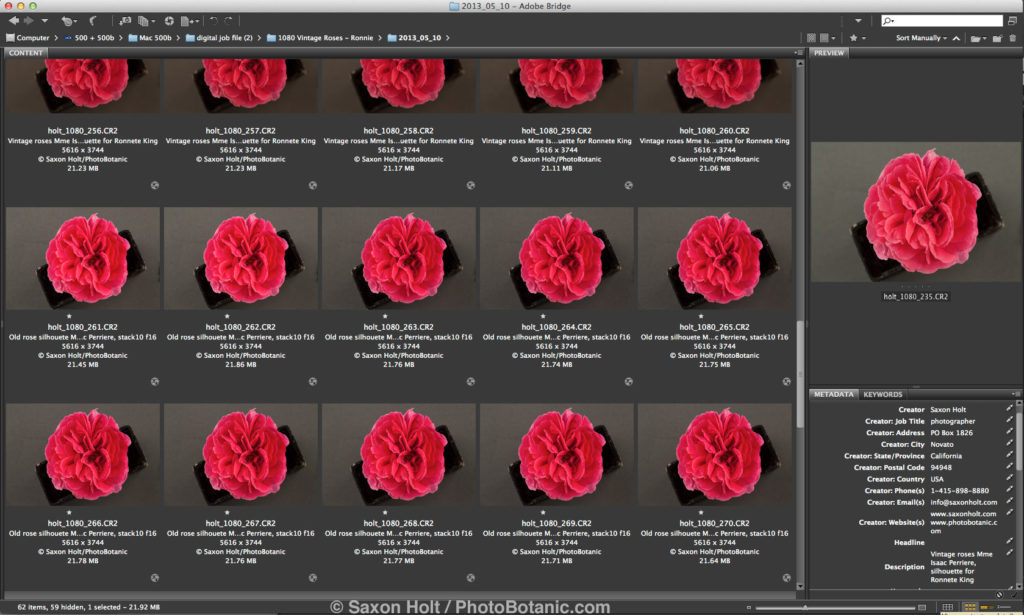 You can’t tell from that image above, that the only thing that changed on each exposure was the focus, but each image became a slice of the final composite. I use a software tool called Zerene Stacker, which is a plug-in to Photoshop that merges the images into one.  I find Zerene Stacker superior to Photoshop’s own tool as Zerene has brush tools that allow minute adjustment to each layer when one layer sometimes overrides another.

Once I have the composite photo I do work in Photoshop to create a mask that will isolate the rose from the background. For the dinnerware project I left all of the roses on a clean white background, but for myself, I wanted to make a series of prints I could sell. 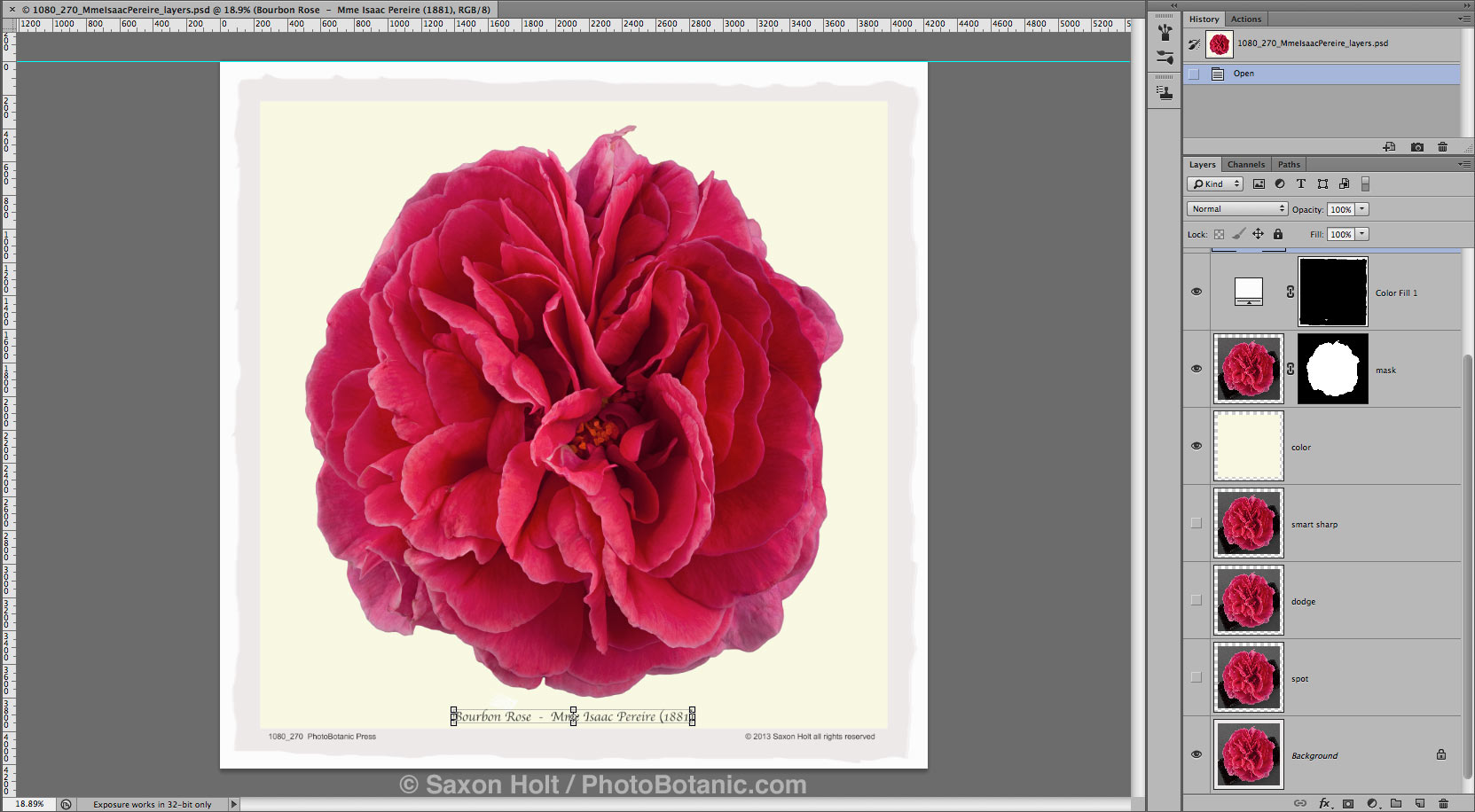 Instead of the white background I used an ivory color and added type in the manner of botanic illustrations, very similar to the engravings by Redouté that inspired the Smith and Hawken prints. 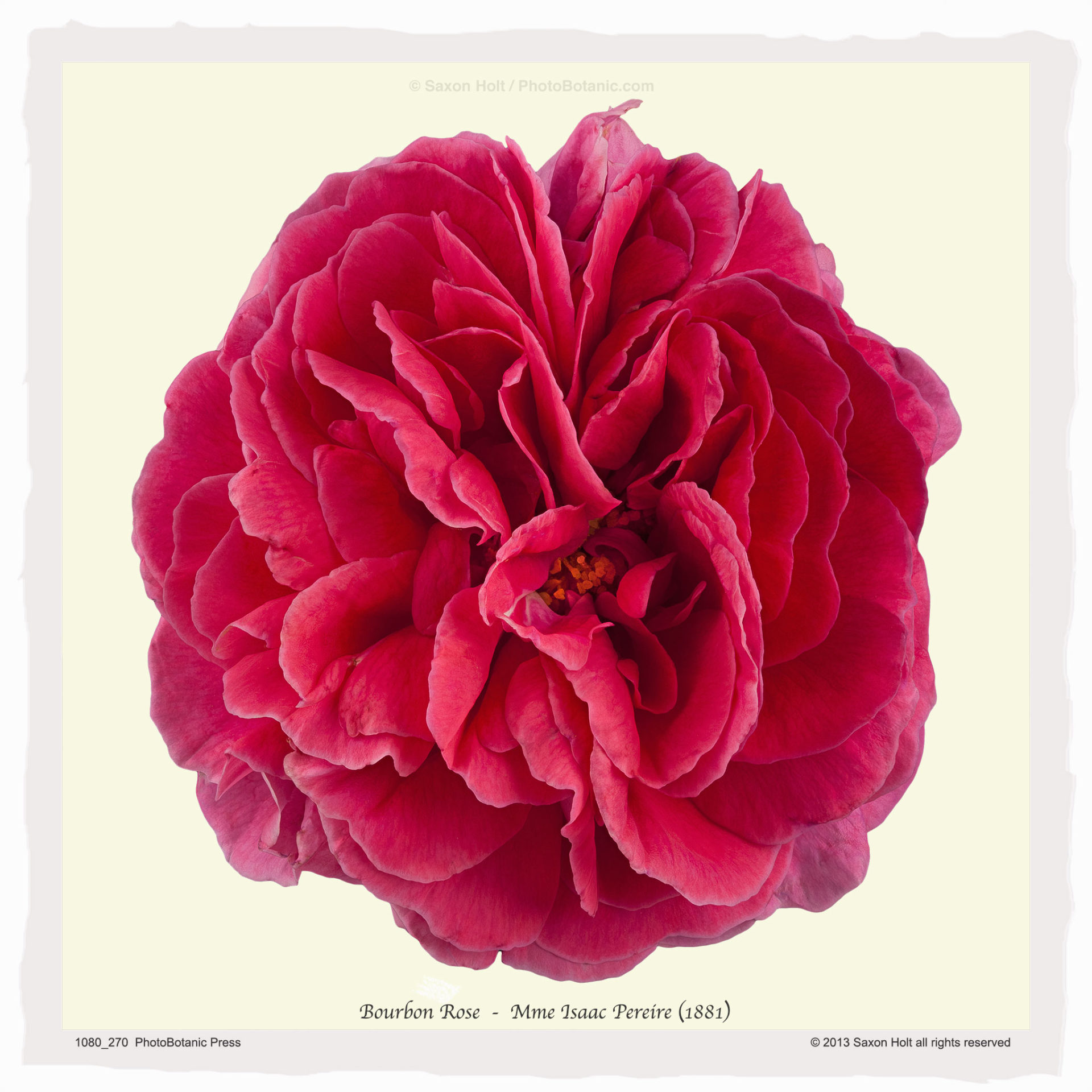 If you look closely at that image you will see the ivory paper color is set off against a pale gray which is actually part of my photographic printing process, as I want to show the photo paper as well as the choice of the cream background. I can put my copyright and file number on to the actual paper which can be hidden in framing.

I really like to evoke the look of classic botanic illustrations which were originally pages of books.  Going this extra step of separating the background from the paper honors that process.

Another botanic illustration technique I use shows the real flower directly from the garden, extracted from nature exactly the way it is. 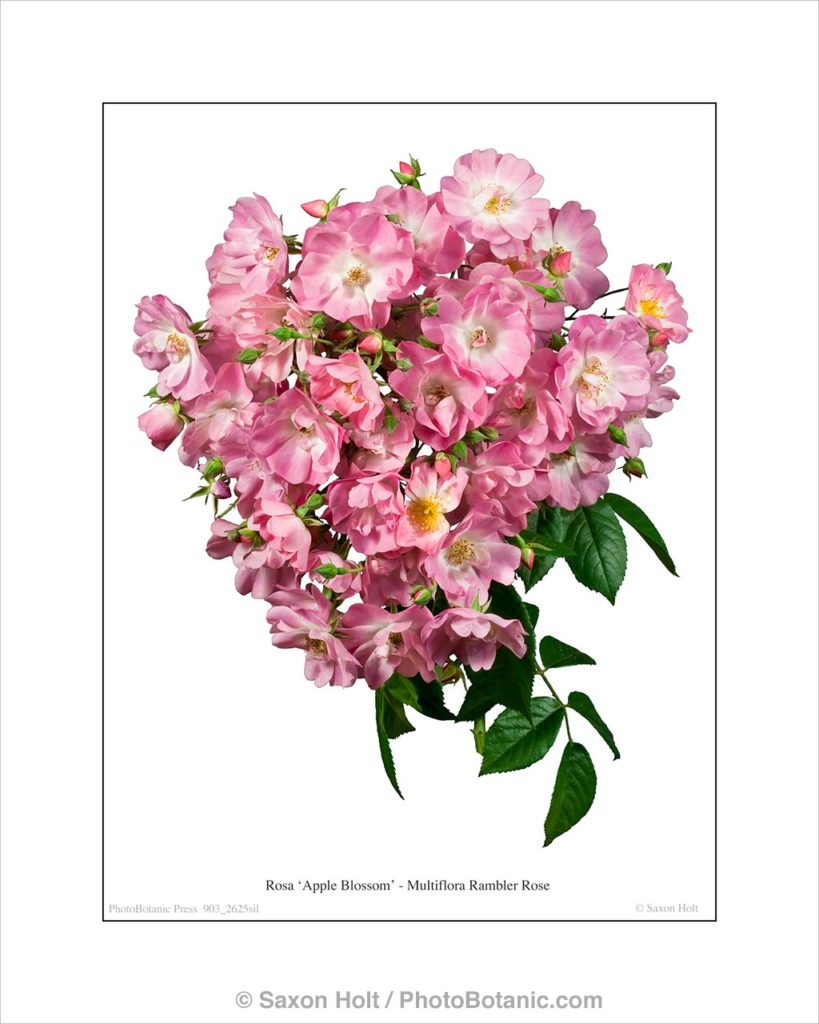 The Smith & Hawken technique, shown earlier, required that the roses be reconstructed; and the focus stack technique is only designed to work on one flower at a time.

Often when I do a PhotoBotanic extraction I will isolate the leaves and branches of a specimen, darkening the background enough so that the specimen jumps off the page, but is still obvious the plant is in the garden, not in a studio. 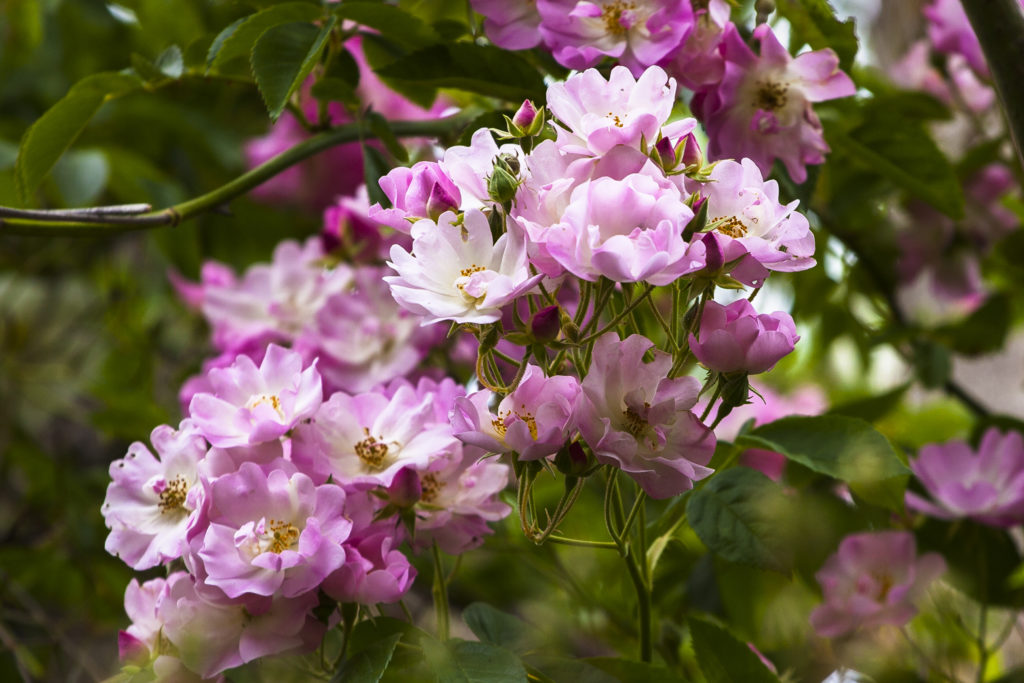 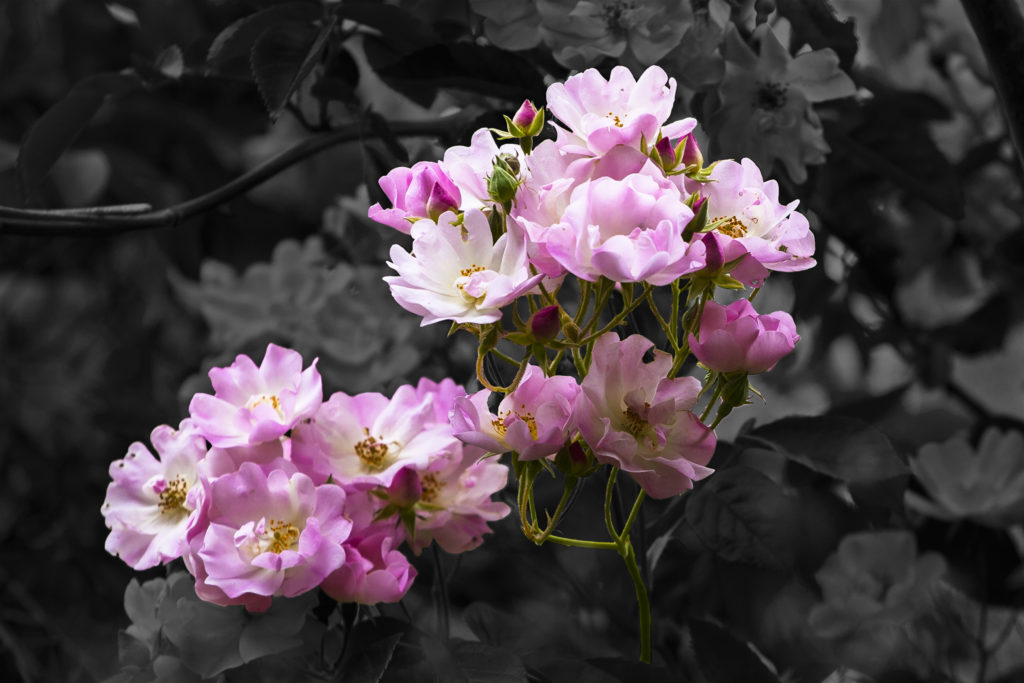 I like the extraction process because it proves the beauty of the plant is in nature and not in the studio.

Modern digital technology makes this process possible.  The concept is pretty straightforward, if tedious: in Photoshop I create a separate background layer, then carefully select the flower and its  small branches. 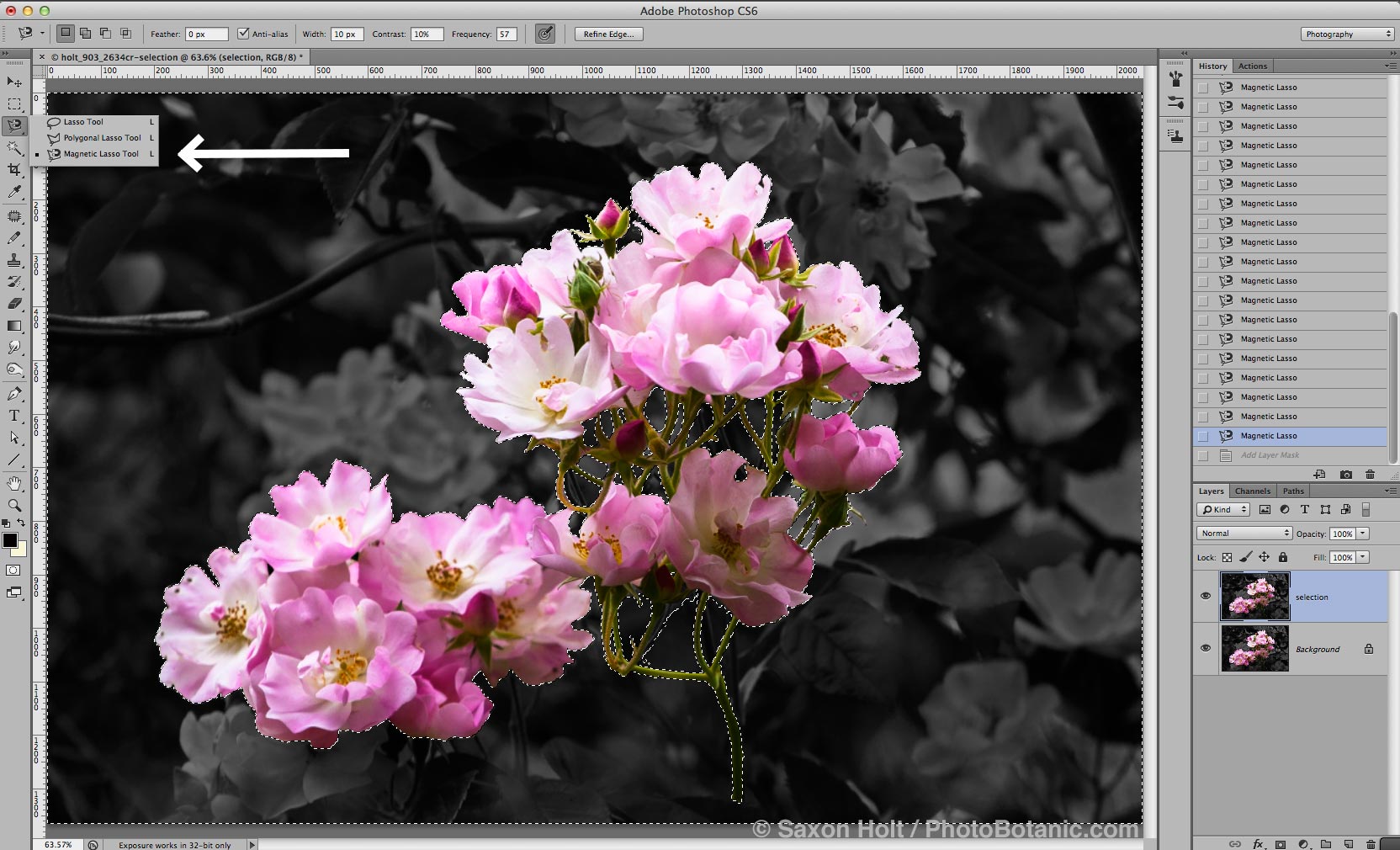 This shows a Photoshop screenshot of a selection tool called Magnetic Lasso that I use to identify the interior spaces between the petals and twigs. I have already used the quick selection tool for the outer area. Once the rose is isolated, I ask Photoshop to desaturate color and darken everything not selected.

But sometimes I just can’t resist bringing a magnificent specimen into the studio. 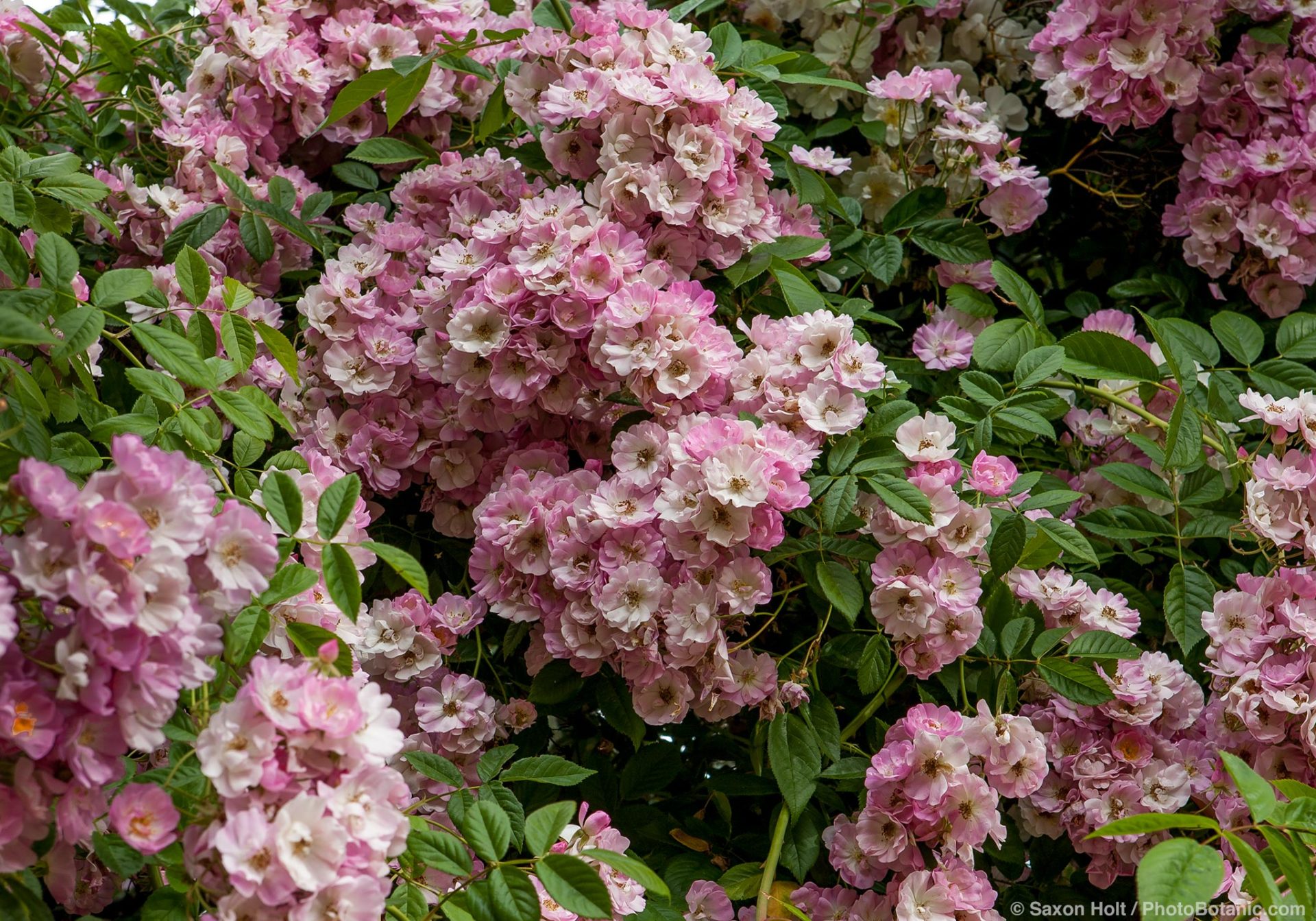 This is a rambling rose called ‘Apple Blossom’ I grow with other ramblers into towering tree trunks at my property line. At the peak of a good year, flower trusses are simply overwhelming.

Here I cut a truss, clamped it down to a simple frog vase in my studio so that I could shoot the flowers as a PhotoBotanic illustration. Note I have used a gray card for color control as described in chapter 2. 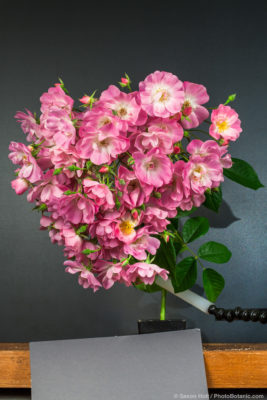 I am careful to shoot straight on to the truss, and the style and illustration with maximum depth of field, which is easy to do in the studio setting with lights. 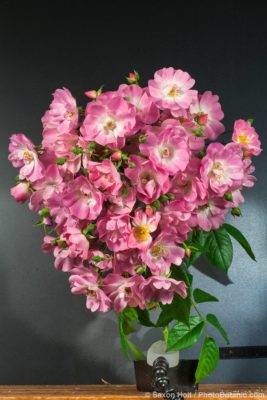 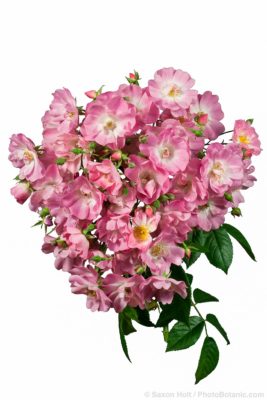 The final print is given type similar to the engravers treatment in the other examples.

The process of making these PhotoBotanic illustrations is quite satisfying. There is no getting around the learning curve of practice and getting acquainted with the Photoshop tools, but if you love photographing roses the way I do you’ll find the hours spent are hours lost in art.

Hours lost in art ? No, if you’ve read the book to this point, you are kindred spirit. There is nothing better spending time with roses, whether in the garden, concentrating on the one hero rose, putting together a bouquet, or even spending time on the computer with roses on the screen.

These are not hours lost. Enjoy the process. 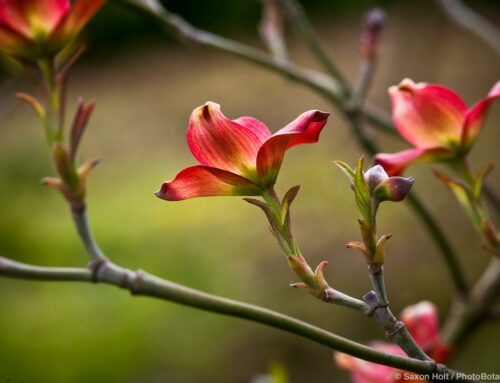 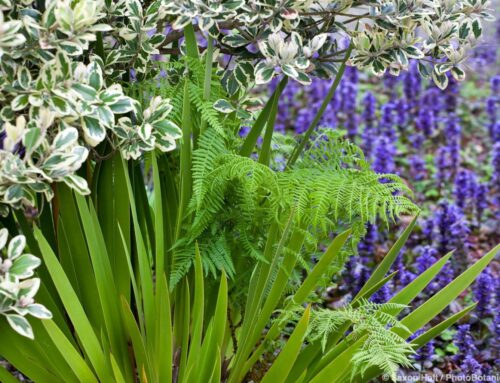 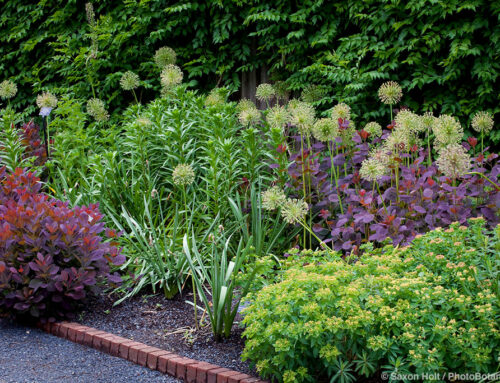